This weekend's election for chair of the California Democratic Party, with front-runners Kimberly Ellis, a progressive organizer, and Eric Bauman, a party insider, could have national implications

This weekend's election for chair of the California Democratic Party, with front-runners Kimberly Ellis, a progressive organizer, and Eric Bauman, a party insider, could have national implications 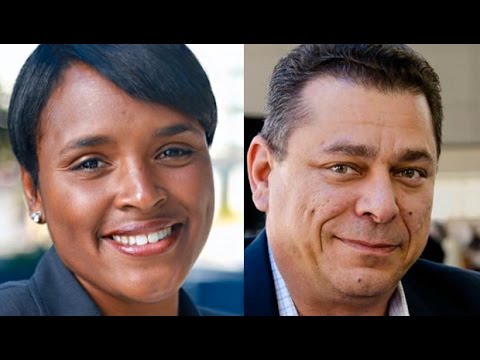 AARON MATE: It’s The Real News. I’m Aaron Mate. The ongoing woes of President Trump’s White House have major implications for the Republican Party’s future. But on the Democratic side, one big fault line is out west. The California Democrats are holding a key election this weekend that could have a national impact. Party members are in a pitched battle over who will be the next State Chair. Eric Bauman, a Party insider faces progressive organizer Kimberly Ellis, who was supported by the Party’s Bernie Sanders’ wing. And just like the race for DNC Chair and before that, the Presidential Primary, this contest is pitting the grassroots against the establishment. Joining me is Karen Bernal, former Chair of the progressive caucus of the California Democratic Party. She is an advisor to the Kimberly Ellis campaign. Karen, welcome.

KAREN BERNAL: Hi. How are you?

AARON MATE: I’m good, thanks. Thanks for joining us. So for those who might be hearing about this campaign for the first time with the vote coming up this weekend, tell us about it.

KAREN BERNAL: Well, it’s as you say, I think there is a sense of the new wave of Berniecrats that have swept in, and the energy of the resistance within the Party versus the status quo establishment as expressed through Eric Bauman. I think we have to be fair here that there are some Berniecrats who live in the L.A. area perhaps that support Eric Bauman, but by and large, the lion’s share of those Berniecrats that have swept into the Party are definitely supporting Kimberly Ellis. And so it represents basically through the eyes of many of those Berniecrats, the politics of transformation versus transaction.

AARON MATE: How so?

KAREN BERNAL: Well, I think one of the things that got a lot of the new Bernal going was the revelation that Eric Bauman, who is owner of a consultancy firm, has received hundreds of thousands of dollars from big pharma to help oppose Prop 61 last year, which would have lowered drug prices. It was a proposition, a state-wide proposition that even Bernie came out to stump for, and when it was revealed really crystallized in many people’s minds what was wrong with the Party that we have amongst its leadership, and really just throughout the elected ranks. So the grassroots of the Party, the Berniecrats that have swept in as new delegates, they have a vote in this race, and they are firmly behind Kimberly Ellis, who has promised a politic that emphasizes small D democracy, greater empowerment of the grassroots, and also a pledge not to be beholden to corporate interest.

AARON MATE: Now, in fairness to Bauman on that issue of his firm taking pharmaceutical money, I believe he said that he was not involved at all in that consultant work, even though it was paid to his firm.

KAREN BERNAL: Yes, and when you look at the particulars of who owns his firm, it is himself, his husband, and then his personal assistant from the county committee there in Los Angeles, and the firm is addressed to his home address. So for many people, that distinction is without a difference.

AARON MATE: So let’s talk about Kimberly Ellis. I believe if she wins, she’d be the first woman of color to lead the California Democrats. Tell us about her background.

KAREN BERNAL: Well she came from Emerge America, and then she was the Executive Director of Emerge California for seven years. During that time, she quadrupled their budget, she doubled their programs, and she also started to introduce notions of race and class into many of the curriculum, which at the time she had taken on. I think for many people, it was initially seen as kind of a white suburban feminist outfit that just practiced kind of a very, for lack of a better phrase, “hill-bought politics.” It is still very establishment I would say, but I would also say that there’s been a great deal of diversification. The last two years have seen many Bernie supporting women in its program, and now even it’s able to boast that 56% of its … How can I say … Members are women of color, so that’s really a great improvement.

AARON MATE: And in terms of the Berniecrats as you call them, and their political activity in California, I understand that this year earlier, there was some district assembly elections and the Berniecrats did quite well.

KAREN BERNAL: Yes, they did. I actually was one of the … I guess I’m guilty of being one of the chief architects of that program state-wide, along with a few other people. We organized a slate up and down the state, and we did everything we could to be a part of that sweep and that inside fight, and we were very, very successful.

AARON MATE: And looking at this issue nationally, I understand there’s some disarray right now inside the party. It’s sort of at a crossroads, I think that crystallized especially in this recent race for DNC Chair. When you had Keith Ellison, who was the Progressive candidate, got widespread support. And then as he picked up momentum, the Clinton-Obama wing basically put forward Tom Perez as their candidate, and low and behold he ended up winning, angering many people on the Bernie Sanders side. I’m wondering, from your perspective as a grassroots organizer and activist, what the mood is right now from Bernie Sanders supporters in terms of their take on whether there’s room for them inside the Democratic Party as it currently is?

KAREN BERNAL: Well, I can tell you that for California Berniecrats that swept into the Party, they’re definitely looking at this as a bell weather event to determine which direction the Party is going. It hasn’t been lost on us that the state Democratic Party being the largest in the country. What happens here is going to have a ripple effect, and we know that the rest of the country is going to be watching the election to see what happens. So there’s a great deal of gravity that’s put on this event, and we know however that outside grassroots pressure, it has to be coupled with the inside push. We also understand that whoever is at the top of the state Party apparatus, it’s going to be … That element is either going to be the thing that really eventually diminishes the power of the grassroots or enhances it. That’s why this race is so important because this is going to be a referendum on the power of the grassroots, the bottom-up push, small D democracy within the party, or it’s going to be business as usual, top-down.