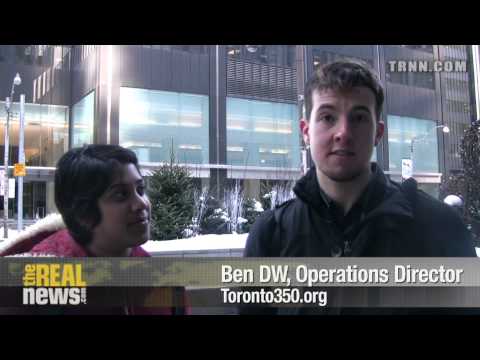 KATHLEEN MAITLAND-CARTER, TRNN PRODUCER: On a very cold and windy morning on Thursday, February 12, in the heart of Toronto’s financial district, local activists staged an action in the leadup to the first-ever global divestment day for fossil fuel, among the first of some 400 political actions planned around the globe.

KATIE KRELOVE, TORONTO350.ORG: Across Canada, across the United States, across the world, people are pushing investors, especially public institutions and large investors, to divest from fossil fuel companies.

MAITLAND-CARTER: It took place at the 9:30 a.m. opening of the Toronto Stock Exchange.

KRELOVE: We came down today to kick it off here in Canada to the Toronto Stock Exchange because Canada has a lot of money invested, especially in the tar sands. So we really focused our campaign today, our protest today, on divesting from the tar sands, as they are one of the dirtiest, most expensive and most unsustainable source of fossil fuels going in the world.

BEN DW, OPERATIONS DIRECTOR, TORONTO350.ORG: I’m here from Toronto350, and we’re taking action for Global Divestment Day. Our message is that the tar sands are morally toxic and they’re economically toxic. Morally, all of their share prices are based on 5 degrees of climate change, enough to start runaway climate change. Economically, if the oil price isn’t above $95 a barrel, $271 billion of tar sands infrastructure won’t break even over the next ten years. It’s not an ethical investment. It’s not even an economically sound investment. So our message is that we have to take power away by hitting them where it hurts and be the smart money and get out of the tar sands.

MAYA M., STUDENT, UNIVERSITY OF TORONTO: Stephen Harper’s putting all of our eggs in one basket. And the youth of Canada are speaking up. We don’t want to see our economy balanced on the edge of a knife.

ENVIRONMENTAL POLICY ALLIANCE (VOICEOVER): A boy named Joe and Fossil Fuels were in love. They did everything together. But after a while, his friends started badmouthing Fossil Fuels. They started spreading rumors and blaming her for everything bad in the world. So Joe decided to break up with Fossil Fuels, even though she had done so much for him. A group of anti-energy activists led by Bill McKibben want you to break up with fossil fuels this Valentine’s Day. But breaking up is hard to do when fossil fuels make most things in life possible. Fossil fuels provide 80 percent of our energy.

KRELOVE: And we know that this is going to be difficult transition. And that’s why we need to start doing it today. We know that we need to reduce greenhouse gas emissions by 80 percent within the next 20, 25, 30 years in order to avoid dangerous climate-change limits, in order to keep global warming under that 2 degrees Celcius that every country in the world has agreed is a dangerous limit that we should not pass.

MAITLAND-CARTER: The activists had some investment advice for businesses, banks, stockholders, and the government.

ARIEL: A huge amount of Canada’s economy is based on the tar Sands, and this is just not a sustainable way for this country to move forward. So we’re here to let them know that it’s time to change towards a sustainable future.

MAYA M.: This year, renewable energy jobs surpassed jobs provided by the oil sands, and that should speak in and of itself. This is not an industry that’s growing internationally, and with finite resources it can’t grow. There’s a finite growth rate to it anyways. So it doesn’t seem like a smart economic or viable decision even if you look at the statistics.

BEN DW: And moreover, the tar sands are only 2 percent of Canada’s economy, and they’re supported by massive subsidies from the federal government. If we just leveled the playing field for renewable energy, it would outcompete the tar sands right away and produce more jobs, something in the factor of, like, six or eight times more jobs per dollar invested. So if you want to make jobs, you don’t invest in the tar sands.

KRELOVE: You know, when even interest institutions like the International Monetary Fund, the IMF, are calling for nations, for states, for federal governments to stop subsidizing fossil fuel industry, you know it’s time for that to happen.

CROWD: Invest in our future, not in pollution! Put your money in the solution!

MAITLAND-CARTER: This is Kathleen Maitland-Carter, reporting from Toronto for The Real News Network.