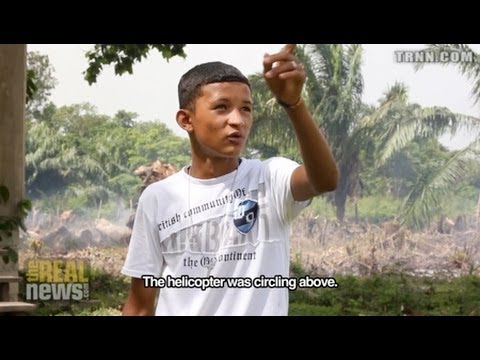 KAELYN FORDE, TRNN: The Caratasca Lagoon–Hondurasâ€™ gateway to the Caribbean, a U.N.-protected biosphere and the home of indigenous Miskitu communities like this one. But it also the new ground zero in the U.S. war on drugs, and increasingly, a base for the U.S. military. It’s turned the sparsely populated Miskitu coast into a violent place.

KAELYN FORDE, AHUAS, HONDURAS: For the Miskitu community of Ahuas and the surrounding area, the Rio Patuca is a lifeline and a highway. In fact, everything that arrives here arrives by boat, from cars to building supplies, from food and medicine. Which is why people here say itâ€™s not uncommon for boats to come day and night to load and unload passengers and cargo. The boat that came on May 11 wasnâ€™t unusual. But what happened next, and the four people who were killed, certainly were.

CLARA WOOD (SUBTITLED TRANSL.): My poor child, just 14 years old, what would he have known of that badness? Heâ€™s with God now. And my cousin was in the boat with her two babies, what do they have to do with drug traffickers?

FORDE: Until now, many communities here–closer to Nicaragua than to their own capital–have taken care of themselves, relying little on the government for healthcare, education or policing.

JUDGE WESLY MILLER (SUBTITLED TRANSL.): In the Moskitia, people are poor. And while itâ€™s likely some get involved in drug trafficking, they do rustic work like â€˜bring this container of water, and Iâ€™ll give you a dollar.â€™ And you donâ€™t care where that dollar comes from because you have to buy rice to survive.

FORDE: The U.S. conducts anti-drug trafficking operations from a military base at the mouth of the lagoon, saying it is there to intercept speedboats loaded with drugs on their way to markets in the north.

HONDURAN ARMY COLONEL RONALD RIVERA (SUBTITLED TRANSL.): Here we have the Caratasca Naval Base, and they are working in an almost permanent way with the North American navy, engaging in operations and exercises.

FORDE: Itâ€™s one of three forward operating bases the U.S. has constructed in la Moskitia since the 2009 military coup.

DAVID VINE, AUTHOR AND PROFESSOR: They have been constructed in a number of places, especially on the Northern coast, especially in la Moskitia, in areas that have become the center of growing conflict, growing drug trafficking and growing interest from business interests as well.

FORDE: But even before the killings in Ahuas, the military presence had clashed with Miskituâ€™s ability to fish and live in the lagoon. Danny Williamâ€™s son was run over by a Honduran warship while he was fishing.

DANNY WILLIAMS (SUBTITLED TRANSL.): We were like hand and arm, always joined together. He was everything to me.

FORDE: The Army promised to help pay for his sonâ€™s burial, but never did.

WILLIAMS (SUBTITLED TRANSL.): I couldnâ€™t fight them anymore, because they are bigger beings than I am. But they told me they would help me.

FORDE: Long known as the banana republic, Honduras today is the second poorest country in the hemisphere. 65 percent of the population lives in poverty. But that might be about to change.

VINE: The 2009 Wikileaks cable from the U.S. embassy in Tegucigalpa talked about a large scale project, an unprecedented project, for la Moskitia. A public-private partnership that the United States military was really leading, but in coalition with a range of other U.S. government agencies for la Moskitia, to bring together public–meaning U.S. government and Honduran government–and private entities, mostly for profit companies. Like General Electric, and a large real estate development firm.

FORDE: Just what that development will look like is unclear. But many say it is part of a broader conflict over resources.

ANNIE BIRD, CO-FOUNDER OF RIGHTS ACTION: The drug war in Honduras, the areas that are in conflict in the drug war, exactly coincide with areas where there is a lot of interest in natural resources. Whether that be petroleum, mining interests, rivers for hydroelectric dams or land for African palm or sugar cane plantations, which are both used for biofuelsâ€”that’s what the conflicts are about. And security forces in Honduras and other parts of Central America like Guatemala, under the framework of the drug war, are being used to displace communities, to separate them from land rights, and gain access to natural resources–land, rivers, petroleum, forest. And the US assistance in the drug war is helping to facilitate that.

BERTA OLIVA, COMMITTEE OF THE FAMILIES OF THE DETAINED AND DISAPPARED (SUBTITLED TRANSL.): If they are killing us, then what matters to us? To save our lives. And in this way, they make the abandoning of the lands almost voluntary because these people have to leave to save themselves. Thatâ€™s why they have these tough operations with such tragic results.

FORDE: In response to the growing violence, Miskitu leaders have organized community assemblies like this one. Representatives from 43 communities across the lagoon traveled for days to come here. Communities are demanding that military and business interests meet with them first.

FORDE: But to the Miskitu here, there’s more at stake than their heritage.