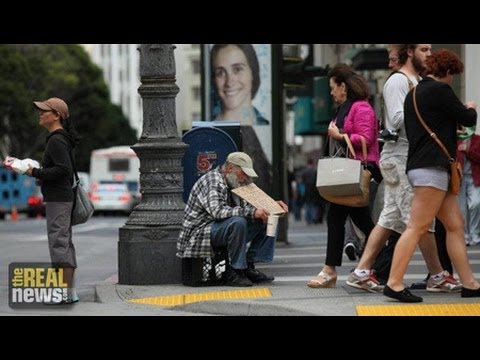 According to the latest Census Bureau data, nearly 50 million people, 3 million more than previously reported, are living in poverty.

Now joining us to discuss this is Jeannette Wicks-Lim. She’s an assistant research professor at the PERI institute at the University of Massachusetts Amherst. Thank you so much for joining us.

JEANNETTE WICKS-LIM, ASST. RESEARCH PROF., POLITICAL ECONOMY RESEARCH INSTITUTE: Thanks for having me.

NOOR: So we have this new official number of nearly 50 million, 3 million more than previously reported, people living in poverty in America today. But talk about with the actual numbers look like.

WICKS-LIM: Okay. So, yeah, just last week the Census Bureau released numbers based on their Supplemental Poverty Measure, which is supposed to be an improvement on its official poverty measure, which came out a few months ago. And so, yeah, they now have released a number saying about 50 million Americans are poor, 3 million more than what their older measure reported at 47 million U.S. citizens who are poor.

So these two measures, you know, roughly measure about the same number of poor people in the U.S., but they do it in very different ways.

And I just want to talk a little bit about, you know, what it is that this new measure, the Supplemental Poverty Measure is doing for us in terms of giving us more information about who’s actually poor in the U.S., because it I think it does do a few things that are improvements on what used to be the only poverty measure that the Census Bureau provided.

And so with this Supplemental Poverty Measure, we can see a few different things happening. For one, when you look at workers and whose for poor, the percentage of workers who are counted as poor, with the new measure you see the poverty rate of workers going up from 7 percent to 10 percent. So you see that, you know, once you take into account work expenses, that this makes a big difference in terms of how many people would be counted as poor.

And so these are, you know, really important distinctions that this new measure takes into account.

The one large failing that I see in the new poverty measure is that it still takes–still uses a living standard for measuring poverty that’s quite low. You know, if you look at how many different poverty experts have, you know, examined the poverty line and said this poverty line is just simply too low, that it really measures a very severe level of economic deprivation, what I think is a terrible, a real missed opportunity with the new poverty measure is that it didn’t at least make the living standard higher, something that would be more reasonable in terms of what we think about as being poor.

You know, I think most people would say a reasonable definition of being poor is if you can’t meet your basic needs–food, clothing, shelter, energy needs, transportation, medical care, etc. And, you know, there have been organizations across the country that have been trying to produce exactly that kind of measure for, you know, local areas. When you look at those types of, you know, self-sufficiency budgets, basic family income budgets produced by the Economic Policy Institute, those kinds of measures really start to look at income levels that are about twice the official poverty line, which is much higher than the new poverty measure–what the new poverty measure counts as being poverty-level income.

So, you know, if you start to look at what most people would consider being poor in the U.S., that is, what I would call two times the official poverty line, instead of looking at rates of 15 or 16 percent–that’s what the official measures counts as poor in the U.S.–you’d be looking at 34 percent of people in the U.S. being counted as poor. So that’s really more than one in three people in the U.S. being counted as poor. That paints a really different picture about what the poverty rate is in the U.S.

WICKS-LIM: Right. Yeah. No. That’s a really important thing to point out. I think the new poverty measure that the Census Bureau puts out does a much better job at capturing how important these anti-poverty programs are. You know, the earned-income tax credit and the SNAP program, what we used to call food stamps, those are two major anti-poverty programs in the U.S., and those make a substantial difference when you’re looking at poverty rates.

Now, if you look at, you know, who these programs really target [incompr.] kids, you see that when you take into account the impact of those programs, you know, SNAP and [incompr.], you’re looking at poverty rates amongst children falling from 22 percent to 18 percent. So that makes a huge difference in terms of, you know, what’s actually happening with poverty, especially amongst children.

So I think a real benefit of the new poverty measure is that it does do a much better job at giving credit to our antipoverty programs in terms of actually focusing resources and bringing people out of poverty.

One other thing I wanted to bring up about looking at, you know, the poverty rate in the U.S. and having a better picture of what poverty looks like is, you know, there are a lot of debates going on about the minimum wage and food service workers and seeing these fast food strikes going on, you know, where fast food workers are asking for a higher wage. If you look at the official poverty line and you look at full-time year-round workers in the food service industry, you see a poverty rate about of about 8 percent. Okay. So 8 percent of fast food or food service workers are counted as officially poor. When you look at two times the official poverty line, you’re looking at 41 percent of food service workers being counted as poor. So I think it’s really important to have a better measure of what it is to actually be poor, especially when you’re trying to consider who is counted as the working poor.