$10.10 an hour minimum wage increase shows an improvement but is still not a living wage, which would be twice the poverty rate at $12 an hour

$10.10 an hour minimum wage increase shows an improvement but is still not a living wage, which would be twice the poverty rate at $12 an hour 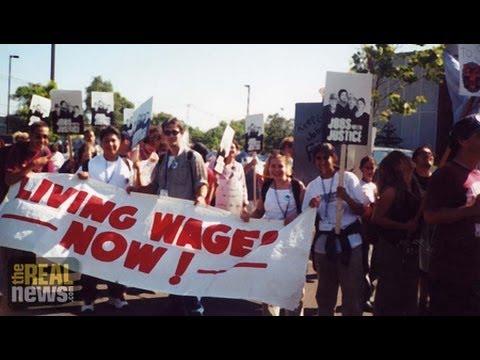 Thirteen states raised their minimum wage in 2014, but in the vast majority of states it still falls sort of a living wage, which is the hourly rate required for a full-time worker to support themselves and their families.

Now joining us to discuss this is Jeanette Wicks-Lim. She’s an assistant research professor at the PERI institute at the University of Massachusetts Amherst.

Thanks for joining us, Jeanette.

DESVARIEUX: So, Jeanette, 75 leading economists, including seven Nobel laureates, today voiced support for the Senate Democrats’ bill to wage raise the minimum wage to $10.10 by 2016. Do you consider a $10.10–$10 an hour a living wage?

WICKS-LIM: Well, I think that getting the federal minimum wage up to $10.10 would certainly be a helpful step in the right direction.

I think if you want to think about what a living wage is and whether or not that rises to that level, I think you have to look for more progress. I mean, there are a lot of different ways that people measure what a living wage is. It’s kind of a moving target in terms of how people define it. But the rule of thumb that I like to use is to consider what level of wages you would need to get a family up to about two times the federal poverty line. That’s usually the place where families find themselves able to avoid serious economic hardships, like living in overcrowded housing, worrying about whether or not they can buy enough food, and worrying about whether or not they can even pay rent.

So if you think about what that means, you know, if you get to two times the federal poverty level, if you’re looking at full-time year-round worker and say you have two workers in the household, if you can get them to about $12 an hour or something on the order of that range, then you’re looking at something where people can afford their basic needs. It doesn’t get them to a place where they’re comfortable, but at least they’re not facing the serious economic hardships that I just listed.

DESVARIEUX: Okay. So, essentially, the $10 mark, it falls short of that $12 living wage that you’re talking about. But considering the wide range in terms of costs of living across the U.S., is it even appropriate for the federal government to decide what workers should be paid?

WICKS-LIM: Well, I think the important role of the federal government coming in and setting a standard nationwide is to really set the very bottom standard, you know, the lowest wage standard. If you look across the United States, currently there are something like 20-some states that have state minimum wages that are above the federal rate. And so you see–like, right now the federal minimum wage is operating as providing the very bottom of the bottom in terms of wage standard, and states then adjust and try to see what it looks like in their state in terms of cost of living and raise their state minimum wages up higher than that. If you look at, for example, Washington State, which is a fairly high cost of living state, they have a current minimum wage at about, I think, $9.32. So it’s substantially higher than the federal minimum wage.

Unfortunately, the federal minimum wage hasn’t moved since it was increased in two steps from 2007 to 2008 to 2009. And so it’s been lagging behind in terms of its real value. And you see that even in states that have their minimum wage above the federal rate, they’re still not quite getting workers to a place where they can afford basic needs.

DESVARIEUX: Okay. I want to talk more specifically about the workers that would be affected by increasing the minimum wage, ’cause according to the Congressional Research Service, 1.6 million hourly workers earn the minimum wage currently. That’s really only about 1 percent of the U.S. workforce. Why is raising the minimum wage important if it only affects such a small segment of the labor market?

WICKS-LIM: Right. Well, that figure probably just refers to workers who are earning at or below the federal minimum wage where it stands currently, which is $7.25. It’s a very low wage rate.

Now, if you’re thinking about who would be affected by raising the minimum wage from $7.25 to this proposed $10.10–so you’re looking at workers who are within that, you know, margin, $7.25 to $10.10, but you’re also looking at workers who earn a little bit above that. You know, workers who are just above this new wage floor that’s being proposed also get a bump up from the minimum wage going up. And the estimates I’ve seen in terms of the number of workers that would be affected by raising federal minimum wage up to $10.10 is on the order of about 28 million workers, which is about one in five workers in the U.S.

DESVARIEUX: Okay. And there are some people that even argue that there could be a ripple effect in the labor market.

WICKS-LIM: Right. That’s what I was referring to. In terms of the workers who earn just about $10.10, if the federal minimum wage was hiked up to that level, $10.10, workers just above that would also get a small raise. So you’re looking at workers between probably about $10.10 and about $12 an hour getting small raises from that minimum wage hike.

DESVARIEUX: Alright. Jeanette Wicks-Lim, thank you so much for joining us.