CA and NY Workers to Earn $15 Minimum Wage, Will US Economy Suffer? 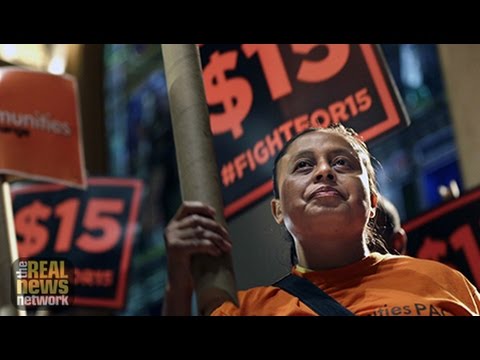 A $15 minimum wage is coming to California and New York. On Monday, California Governor Jerry Brown signed a bill that would raise the minimum wage to $15 by 2022, while in New York, Governor Andrew Cuomo signed into law a $15 minimum wage, as well as a 12-week paid family leave program. Here’s Governor Cuomo on why $15 an hour makes economic sense.

GOV. ANDREW CUOMO: If you work full time, you should be paid a wage that provides a decent living. That’s what FDR said, a decent living. And the truth is, at $9 an hour, you can’t afford to raise a family in New York. And that’s why we’re going to raise it to $15 an hour, to restore fairness and decency.

DESVARIEUX: But when will workers see an increase in their paychecks? Well, that depends on where a person is employed. For example, for workers in New York City employed by large businesses, the minimum wage would rise to $11 by the end of 2016, then another $2 each year after that, until it reaches $15 at the end of 2018.

Now joining us to understand how this raise impacts workers and the rest of the economy is our guest Jeanette Wicks-Lim. Jeanette is an associate professor at the Political Economy Research Institute at the University of Massachusetts Amherst. Thanks so much for joining us, Jeanette.

JEANETTE WICKS-LIM: Hi, thanks for having me.

WICKS-LIM: So we haven’t seen a minimum wage hike of this size before in our federal minimum wage, and we haven’t really seen this at the state level, either. So this is an empirical question about what would happen with a minimum wage hike of this size. And so just jumping to the conclusion that there’s going to be a negative employment effect is not actually the way to go about this question. It’s really to look back and see how have businesses adjusted to minimum wage hikes in the past, what can that tell us about the economies of today, and what kind of adjustments businesses can make now, and how much of an impact that actually results in employment.

DESVARIEUX: I know you studied that extensively. So just unpack that a little bit.

WICKS-LIM: Yeah. So, well, there’s a study that Robert Pollin, my colleague, and I did early last year in January where we looked at the proposal to do a national $15 minimum wage. And what we did is we really focused in on the fast food industry, because this is the industry where there’s a very large number of low-wage workers. And really, this industry is one of the most highly impacted industries whenever there’s a minimum wage hike.

So we did this empirical exercise with saying, okay, what do we know from past research about how businesses, fast food businesses in particular, have adjusted to a minimum wage hike? The kinds of things you see are small increases in prices, reductions in worker turnover, that is, employers are able to hold on to their workers for longer, so they spend less on training and recruiting workers, and they have workers that work at higher productivity levels. So you see that happening. And then you also see that when businesses are operating in a healthy economy that they, by virtue of being in a healthy economy, they get revenue gains year by year because the economy is growing.

Now, businesses can use all these channels, again, price increases, productivity increases, revenue growth from operating in a healthy economy, all of these channels have offset the cost of a minimum wage hike. And what we discovered when we were looking at the question specifically for the fast food industry is that if you gradually implement a $15 minimum wage, again, this is at the national level, over four years, then we wouldn’t expect any negative employment losses in the fast food industry. In other words, the industry continued to grow and implement a $15 minimum wage over four years. And they would do this by adjusting in other ways. Small [price increases].

DESVARIEUX: Okay. You mentioned one of the adjustments is actually increasing the price of goods, and that’s sort of an argument that a lot of pro-business folks make, that you’re essentially going to be passing along the increased labor cost to consumers. So can you talk about that a little bit more? Why should consumers be paying for the increase in a wage, for example?

WICKS-LIM: Right. So there are a couple different ways to think about this. First, the actual price increase that you’re talking about for minimum wage hikes are going to be fairly small. I mean, relative to what people think.

So for example, if you’re thinking about the fast food industry, and you’re thinking about a $15 minimum wage, which is, you know, a sizable increase. Again, if we’re looking at nationally, we’re talking about basically doubling the minimum wage. This doesn’t translate into doubling the prices of menu items, because there are a few different factors that go into this. One is that labor only takes up one part of the industry’s overall costs. Right, so it’s not the whole, you know, their costs aren’t inflating by 100 percent. It’s one portion. The other thing is that it’s one portion of the workers who are getting raises, and the size of the raises will vary depending on how, what their current wage rates are.

So in the fast food industry example, we actually calculated what the price increase would be if we took in combination what the overall cost increase would be for a business after they’ve saved some because of productivity gains and lower turnover, and also from being able to generate more revenue because they’re operating in a healthy economy. And what we found was over four years that the prices would need to go up about 3 percent, 3.4 percent, per year over four years. So a much smaller price increase than one might be thinking initially about when you’re thinking about 100 percent increase in minimum wage.

So that’s the first thing to note, is that yes, what employers typically do is they pass on some of the cost increase to the consumers. But a modest cost increase, a modest price increase.

DESVARIEUX: Gotcha. Okay, let’s talk about this argument that states like California and New York can essentially afford a $15 wage. And they have very different economies from a state like, for example, Wyoming. So although it makes sense for a state like New York or California to have a $15 minimum wage, does it really make sense for those folks in Wyoming, and that’s why this issue should really be handled on a state level. What do you make of that argument?

WICKS-LIM: Well, I think–I mean, there certainly are regional differences in costs of living. But I think the primary thing that people need to know about the minimum wage across the nation is where it has been historically, where it is now, and what our economy can be doing overall.

So right now we’re talking about–you know, we have a federal minimum wage of $7.25. That federal minimum wage, the value of that over the years, has been declining over the past basically four decades. If you look at where it was at its peak value in 1968, you’re talking about something over $10 an hour, somewhere between $10-15 an hour. So this is across the country that people in that economy four decades ago had a minimum wage significantly higher than it is now.

Now, the economy of those years, of the mid, the early 1970s compared to what we have now, it’s a totally different economy. We have workers who are much, much more productive. You have an economy that’s producing many more goods and services per person in this country, yet you’re talking about a minimum wage floor that is lower today than it was across the nation in 1968. So that’s sort of the first thing to, just to understand the federal minimum wage in historical context, is that our federal, our national minimum wage that affects all states, is much lower than it was when the economy produced less and workers were much less productive. The other two things to note about what’s been happening to our workforce over these years is that our low-wage workers are older, so they’re more experienced, and better educated. So we’re talking about two very different economies.

So yes, on the one hand, there are states like Wyoming where the cost of living is lower compared to, say, New York or California. On the other hand, we’ve seen the national minimum wage declining in its value relative to what our economy produces markedly over the last four decades. So in that sense, yes, there are regional differences, but where we are now is much, much too low relative to what our economy could do.

DESVARIEUX: All right. Jeanette Wicks-Lim, joining us from Amherst, Massachusetts. Thank you so much for joining us.