Jeannette Wicks-Lim: The possibility of educating one's way out of poverty is getting dim as most new jobs only require a high school education

Jeannette Wicks-Lim: The possibility of educating one's way out of poverty is getting dim as most new jobs only require a high school education 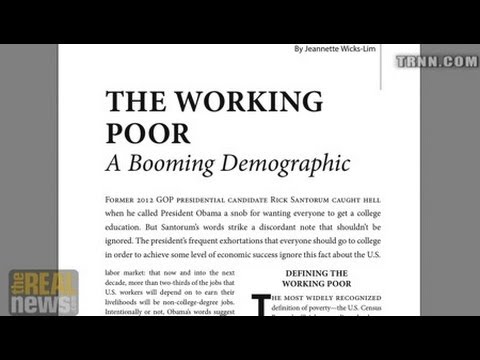 A new study has found that two-thirds of American jobs being created and that are likely to be created only require a high school education or less. So the idea that people are going to educate themselves out of unemployment and poverty doesn’t seem to have a heck of a perspective.

Now joining us to talk about this research is Jeannette Wicks-Lim. She’s an assistant research professor at PERI institute at the University of Massachusetts Amherst. She also writes for the New Labor Forum, where she has a new piece called “The Working Poor: A Booming Demographic.” Thanks for joining us again, Jeannette.

JEANNETTE WICKS-LIM, ASSIST. RESEARCH PROF., PERI: Thanks for having me.

JAY: So talk about what you found, first of all in terms of the nature of jobs that are available, and then what significance that has.

WICKS-LIM: Right. Well, and just to repeat what you said and just to underscore this point, because it seems like a lot of the news stories these daysâ€”well, this has been an old news storyâ€”is that low-wage workers, what they really need is a college education, and that’s what they willâ€”you know, that will be the key to getting them into a better-paying job and get them out of a status of working poverty.

And when you look at what’s actually out there in the U.S. economy and the types of jobs that are offered, what you find is, by the Department of Labor’s own reports, about 70Â percent of the jobs that are currently available, and also the jobs that can be expected to be created between now and 2020, about 70Â percent of them only require a high school degree or less to have entry-level positions. So a lot of these jobs do not require this college education that seems to be pushed over and over again in order to increase the welfare of low-wage workers.

Now, what does that mean? So you have more and more workers being educated, but you still have a very significant share of workers earning very low wages. What it means is that you have better and better educated low-wage workers. So if you look at these $10 an hour or less workers, you see that betweenâ€”you know, over the last three decades, there was 25Â percent of these workers who had some college experience, and now you’ve got 40Â percent of these workers with some college experience. So they are indeed better-educated. So maybe, you know, they’re following this idea that getting more education will improve their economic status. But in fact what we find is that the economic status does not improve.

JAY: So why this change? We’re supposedly going into the technology economy and the information technology and so on and so on, which all supposedly implies better-educated people will do better.

WICKS-LIM: Well, I think [incompr.] just a misrepresentation of what’s happening in the U.S. workforce. And what you often will hear, if you listen carefully, in news reports about what’s happening with the workforce, what you often will hear people say is the fastest-growing jobs are in these high-tech fields that require a high level of educational credentials and that, you know, pay good wages. Well, these jobs take up a very small share of the workforce, so they may indeed be growing very fast. They represent a very small number of workers in the overall economy.

Instead what’s the sort of mainstay in terms of work in the U.S. economy are these jobs that only require a high school degree or less. They’re usually tied to the service economy. So if you lookâ€”again, this is something that’s reported by the Department of Laborâ€”one of the things that they report, they report amongst the top 30 occupations with the largest job growth betweenâ€”what they are projecting between 2010 and 2020, that amongst those top 30 jobs, many of them are very low wage jobs, very low wage occupations.

And what I did, actually, in this recent piece that I did is I compared the occupations in this list of the top 30 occupations with the largest job growth over the next ten years to the most common jobs held by the working poor. And, in fact, the majority of the occupations in both these lists are the same. In other words, the jobs that are adding the most number of jobs, the ones that are expected to add the most number of jobs over the next ten years, are the same kinds of jobs that the working poor hold. So that’s really a more accurate description of what are the most common, most prevalentâ€”the jobs that are going to be adding the most new positions over the next ten years are these kinds of jobs. And you can imagine what these jobs areâ€”you know, consist of. They are jobs like janitors, security guards, childcare workers, home health care aides, those types of positions. And those are positions that people, you know, are pretty well aware are pretty common in the U.S. economy, and they just, in fact, make up a large proportion of the workforce.

JAY: And, of course, the other thing that’s happening is that even jobs that traditionally paid significantly more, like in the auto industry, where it used to be a starting worker would make $24 to $26 an hour to begin, the new contracts now have starting workers at $14, or even less in someâ€”in auto parts manufacturing, and these kind of two-tier contracts are happening all over the country. So even those working class jobs that in theory did pay more are disappearing.

JAY: And of course that has pretty broad implications for the whole economy as well, because, I mean, we’ve been saying on The Real Newsâ€”and I canâ€”it’s probably rather obvious to people that if demand doesn’t increase, if more people can’t buy more stuff, then the economy continues to stagnate. But that means higher wages, and in fact things are moving in the opposite direction.

But you do needâ€”what I argue in the piece is you need a stronger labor movement.

JAY: Thanks for joining us, Jeannette.