John Weeks: IMF admits failure during bailout of Europe; now it should face up to its role in Africa

John Weeks: IMF admits failure during bailout of Europe; now it should face up to its role in Africa 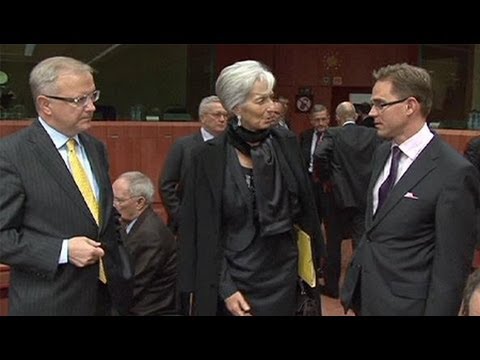 The IMF has just released a report admitting serious mistakes in its bailout of Greece. Our guest today has just returned from Zambia and Tanzania, where people are asking when will the IMF admit its mistakes in Africa.

Now joining us is John Weeks. He’s a professor emeritus at the University of London School of Oriental and African Studies. He is an author of the recently released book The Economics of the 1 Percent: 1 Percent Economics, 99 Percent Ideology. He is founder and contributor of JWeeks.org. And he now joins us from London.

Thank you for joining us, John.

JOHN WEEKS, PROF. EMERITUS, SCHOOL OF ORIENTAL AND AFRICAN STUDIES: Thank you very much for having me on.

NOOR: John, what is your reaction to this IMF report admitting serious mistakes in its bailout of Greece?

WEEKS: Well, the first thing to realize [incompr.] the IMF is the organization least likely to say, I made a mistake. So their saying that they made a mistake is quite important.

The second thing is that this is not a minor thing. I mean, why should the people watching this, why should they care? The IMF makes a mistake. Slightly embarrassing. So what? Significance of this is that this mistake led to the poverty and the deprivation of hundreds of thousands of people. And the same thing happened on a larger scale in Africa over the last 15 to 20 years. We’re talking about major international transgressions, crimes, if I could use that term.

And [incompr.] briefly I’ll explain what the IMF says the errors were and what the significance is. The IMF, when it extends credit to a country, it makes what it calls a debt sustainability analysis. And in layman’s language, street language, what’s that mean? [incompr.] an estimation to see whether or not the country is likely to be able to repay the money that the IMF lends to them.

Now, whether or not a country can do that will be determined by what its exports will be, because the way you pay the IMF is you have to pay in a foreign currency. You have to pay in U.S. dollars or yen or whatever, euros. So you have to export. So the IMF has to make an export estimate. And that’s what they did in Greece. And it was excessively optimistic.

What the IMF admitted was that its estimate of Greek growth and Greek exports were excessively optimistic. You might say that is the understatement of the decade. They were predicting growth of 2, 3, 4 percent, and the Greek economy for the last four years has declined at an annual rate of about 5 to 7 percent.

So what the IMF and the European Union and the German government were doing [incompr.] called the troika, who basically run this austerity roadshow that’s ravaged through all of Europe, what they basically were saying is, you cut expenditures for your hospitals, for your schools, fewer repairing of roads, and you will recover. But they didn’t. And so Greece just went more and more into debt. And because output was declining, you don’t have to be a mathematician to see if the IMF condition, the troika condition for Greece was that they had to get the ratio of debt to national income down–if national income was declining, you’re very unlikely to do that.

So that’s what was going on in Greece. But it’s a lot bigger than Greece. It’s been going on in Africa for 20 years, as I said. And it was particularly pernicious in Zambia, where the IMF was forcing draconian cuts on the Zambian government in the 1990s and into the new century. And as result of that, the Zambian economy contracted, and their debt situation became worse and worse.

And there is a back story to this. The back story is that the reason the IMF was doing that in Zambia was because in the late 1980s, Zambia had a great very famous president in Kenneth Kaunda. And when Zambia economy was in difficulty in the late 1980s, Kaunda said that he would never agree to the cuts demanded by the IMF. And when the economy began to decline and Kaunda was thrown out of power, the IMF decided it would spend the next ten to 15 years reminding Zambians of the sins of their president for confronting the IMF in a courageous way. And the way they did that was that they refused repeatedly to give Zambia debt relief. And Zambia was one of the last countries to receive debt relief under the highly indebted countries initiative.

NOOR: Professor Weeks, you just returned from Zambia and Tanzania. Talk about what the reaction is on the ground there to this latest news from the IMF and what people are calling for on the ground in these countries directly impacted by this these IMF policies.

WEEKS: I would be delighted to do that.

First, in Zambia, in Lusaka, which is the capital of Zambia, I was working with the Zambian central bank, and the people of Zambian central bank were saying, we had to swallow these same policies that are grinding the Greeks down, and we did it for 15 years. When is Christine Lagarde, the head of the IMF, going to admit the errors made that caused us such suffering? And the NGOs, even the private sector are saying the same thing.

Yes, they made a mistake. [incompr.] Oh, gosh, so embarrassed. You know. We stunted your growth for 15 years. We’re sorry we did it. But now, you know, let’s move on and put that behind us. No, no. I mean, this is with the level of a crime.

Over in Tanzania I was at a meeting on capital flight, and there there were a collection of people from about ten or 11 sub-Saharan countries–officials, NGOs, and others. The purpose of that meeting was to try to develop policies to reduce capital flowing out of Africa. The organizer of it was one person that you’ve interviewed a number of times, Léonce Ndikumana from the University of Massachusetts.

NOOR: Professor Weeks, I wanted to get your reaction to the Greeks’ government response to the IMF report. I’m going to quote the Associated Press here. “Greece’s conservative Prime Minister Antonis Samaras … insisted that Greece remained committed to meeting its ambitious deficit reduction targets, and argued that past errors in the bailout program had been corrected.”

Why are the Greeks sticking with it? Why does a government continue to implement cuts which lead to–we’re talking about major declines. I mean, what we’ve seen in the United States is nothing compared to what the Greeks have had to go through. I mean, hospitals without medicines, schools about books, schools having to close because teachers are fired. Why are they going through it? It is because the powerful people in Greece–financial interests, business interests–see it in their interest to continue in the European Union, and they–because they can borrow cheap in Germany, there are markets in Europe that they can take advantage of.

So that’s where we are in Greece. You have a reactionary government that has happily–well, not happily, probably–what–they are faithfully pursuing policies being put forward by the Germans and the European Commission, no longer the IMF, and with the hope that that will eventually bring benefits to the Greek private sector. They have no interest in the 99 percent in Greece.

NOOR: What lessons should be learned from this episode?

WEEKS: I think the first lesson that should we should learn is that the European–I was a supporter–I mean, I’m American, but I’m also a British citizen. I was born in Texas, but I live in London. I consider myself a European as well as an American. I think the lesson is–I regret to say that the lesson is that the European Union has run its course, and it has now become such a reactionary organization dominated by reactionary elements in Europe that it is no longer something that any progressive can support. I regret to say that.

On Thursday I’m going to Dublin, where on Friday and Saturday there is a conference on can the European Union be reconstructed, and I’ll be giving one of the keynote talks. And I’ll say I–no, I don’t think it can be reconstructed under existing circumstances. That is a very sad thing to say, let me say, because for the last hundred years at least, 140 years, the history of Western and Central Europe has been how to present a united Germany from dominating Europe. That’s what the Franco-Prussian War was about. That’s what World War I was about. That’s what World War II was about. And now it’s come to pass. The united Germany is economically dominating Europe to the detriment of the other countries. And it will not change if Merkel is replaced by the Social Democrats. It’ll be softer, but it will be the same story.

So I think that the only way forward in a progressive way is a, you might say, rebooting the European Union. We’ve come to a point where it can no longer be reconstructed under its present rules.

NOOR: Professor John Weeks, thank you for joining us.

WEEKS: Thank you for having me.