US Fines Deutsche Bank to the Applause of Shareholders

The fines for mortgage fraud had to be low so as not to endanger the viability of Deutsche Bank or Credit Suisse - but now it's not a real punishment, says economist John Weeks

The fines for mortgage fraud had to be low so as not to endanger the viability of Deutsche Bank or Credit Suisse - but now it's not a real punishment, says economist John Weeks 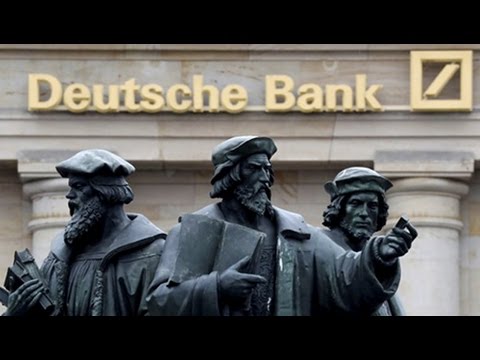 Germany’s largest bank, Deutsche Bank, and Switzerland’s Credit Suisse, agreed to pay a combined penalty of over $12 billion on Friday. The fine is for having misled investors when these banks sold toxic mortgage derivatives in the run-up to the 2008 financial crisis. About half of the fund will go to the US government, and the other half to bank customers, mostly in the form of debt relief. The settlement is far lower than what the US Department of Justice originally had demanded from Deutsche Bank, which was $14 billion from that bank alone. In earlier settlements, US banks such as Citigroup paid $7 billion and J.P. Morgan paid $13 billion in fines.

Joining us from London to talk about the Deutsche Bank penalty is John Weeks. John is Professor Emeritus of Economics at the University of London and is the author of, Economics of the 1%: How Mainstream Economics Serves the Rich, Obscures Reality and Distorts Policies.

Thanks for joining us again, John.

JOHN WEEKS: Well, thank you for having me.

GREGORY WILPERT: So, what do you make of this fine? As I mentioned, it’s part of a series of litigation efforts on the part of the Obama administration, to penalize banks for their part in the 2008 global financial crisis, for them having sold and mislead investors about bad mortgage derivatives. At first the Justice Department wanted $14 billion, but they now agreed to $7 billion from the Deutsche Bank. Is this figure significant, or do you think it’s more like a slap on the wrist? What do you think?

JOHN WEEKS: Well, I think it’s strongly a slap on the wrist, but it’s a lot less than Deutsche Bank feared. As you said, in the middle of the year, back in August-September, the Justice Department was threatening a fine of $14 billion, slightly over $14 billion. Now, it is down to about $7 billion in total, and in fact, only $3.1 billion of it, involves a cash fine, or cash payment. The rest is, as you suggested, is relief to the mortgage holders. And even that, I think is, we have to be a bit skeptical about it because that relief is not going, for the most part, to the homeowners who got scammed on their mortgages, because the mortgages have been repackaged and sold on to other financial institutions, so, it’s very likely that a large amount of that debt relief, as it were, will actually be going to other financial institutions. So, that’s the first thing.

It’s better than not doing anything, but it’s a long way from what needs to be done. $3 billion is nothing to sneeze at, even for a company as large as Deutsche Bank. Though, there was a report in the Financial Times today, that said that the $3 billion payment is sufficiently small, that it will not put Deutsche Bank in… It will not threaten it with financial instability. This involves a rather arcane rule about what assets you have to owe. So, they’ll still be all right on that round.

Then in addition, of course, is I suspect many of the viewers know, the Obama administration has yet to prosecute even one bank official, that is, it’s one thing to fine the bank, it’s quite another thing to take criminal charges against a bank official, and the Obama administration has not done that at all, not even to one person. And that is quite shocking.

GREGORY WILPERT: Yeah, that was actually going to be my next question. On the one hand, it seems like they impose a fine, and then well, it says, we can’t impose too high a fine because otherwise it’s going to cause the collapse of the bank and perhaps the whole European banking system, but on the other hand, the other option would be precisely filing a criminal charge. Apparently in Iceland, this is what they did. What do you think of that solution? I mean, to file criminal charges against CEOs and upper management. Would that be more effective, in effect, than a fine that either risks the bank, or is meaningless?

JOHN WEEKS: Yes, I think it would be more effective, and before going to that, I might just mention that you’re quite right in that the Obama administration, again and again has said, “We can’t have too high of fines, nor can we prosecute individuals, because that could lead to instability of the financial system.”

Now, on the question of prosecuting individuals, yes, I think it would be more effective, and I also think – well, I hate to use such a word – but it would be justice, wouldn’t it? I mean, these people committed crimes. You can… if you steal a loaf of bread, you can go to jail in Texas and other places, for quite a long time. These people stole billions of dollars. They should go to jail. Whether it’s an effective instrument immediately, for getting them to behave better, I think it is, but whether it is or not, they should be tried, and if they’re convicted they should go to jail.

GREGORY WILPERT: I just wanted to go back a second to what you said about the Obama administration’s argument that they implied apparently, that this would also contribute to some kind of financial instability if they prosecute individuals, instead of just imposing fines. Isn’t this also just a matter of, if you’re misleading somebody, isn’t that a criminal offence, and then how would that contribute to financial instability? It’s not really… doesn’t really make sense to me.

JOHN WEEKS: Well, you’re absolutely right. I would say that the criminality is obvious, and if you have a government of laws, then you’re supposed to prosecute people who commit crimes, and then if you think that it’s inappropriate to do that, then you have to change the law. The laws, you have the law, you should prosecute people. That is the position taken by several very eminent US judges. There was an article a couple of years ago by a judge, article in the New York Review of Books, making exactly the argument I’d made, a judge not particularly progressive, and the point he made was that first of all, it would be effective, and second of all you – we prosecute – or we don’t, but you know what I mean – little people are prosecuted, but the bankers are too big to fail and evidently too big to prosecute.

GREGORY WILPERT: Mmm. Another interesting issue that this whole case involves is the reciprocal fining business that is, on the one hand, the US now fined European banks, but just before that, the European Union tried to fine Apple, also to the tune of $14 billion, which was the initial amount that was proposed for Deutsche Bank, and it looks like the Apple tax fine – it didn’t involve fraud, it involved… taxes actually, but it involved tax evasion, basically – and they’re saying that they should pay $14 billion, but now it might be reduced to half.

Do you think that there is some kind of a penalty war going on here, perhaps between the US and Europe, and if so, is that perhaps beneficial to people, or citizens in both places?

JOHN WEEKS: I think it’s possible. I think if it is, it’s being initiated from the US side. I mean, the US government has objected to what it considers unfair treatment of several US corporations, Google, Microsoft, others over the last ten years or so, and I think that this represents those large corporations going to the US government and seeking a patron to stand up for them in political circles. I think it’s very important, other than this may be obvious to viewers; competition among capitalists is not a purely economic phenomenon. When they are pushed to the wall and – or even if they’re not that close to the wall – they turn to a government, a friendly government, in hopes that that government will do what the competitive struggle is not doing for them, that is bail them out.

So, I think that this is not to the benefit of any citizen in either the European Union or in the United States, and what it represents is an attempt by the large corporations to minimize the punishments for carrying out illegal activities.

Having said that, let me just add, as bad as Obama was, and he was pretty bad on this, we are about to enter a presidency where I don’t even think the Justice Department will bother to prosecute banks for this type behavior. I think under Trump, that criminality will be accepted as normal business behavior, which of course it is, but in general, every once in a while, the Obama administration would prosecute criminal behavior. I think it’s very unlikely that Trump’s… not Chief Justice, head of the Justice Department, very unlikely, that he’ll be prosecuting any corporations for anything.

GREGORY WILPERT: Mmm. Yes, that seems very likely, given that there are so many billionaires in his cabinet.

GREGORY WILPERT: Right. We were speaking to John Weeks, Professor Emeritus of Economics at the University of London. Thanks, John, for having been on The Real News again.

JOHN WEEKS: Well, thank you. I just want to say to all the watchers, remember to contribute to The Real News this December. It’ll be a Christmas gift to everybody.

GREGORY WILPERT: Great. Thanks so much. And thank you for watching The Real News Network.