Democrats must transform debt limit deal into a victory for progressives

Democrats must transform debt limit deal into a victory for progressives 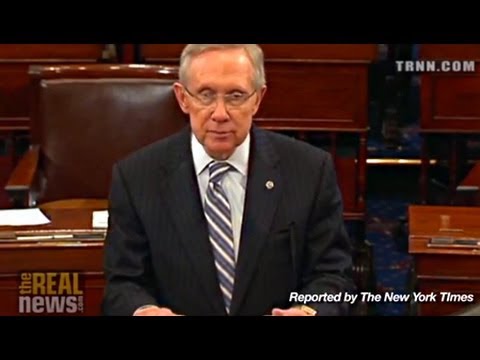 The congressional battle over the government shutdown and debt ceiling has ended. It was resolved last night in a last-minute deal. GOP leaders conceded defeat in their stated goal of repealing Obamacare.

HARRY REID, U.S. SENATE MAJORITY LEADER (D-NV): But in the end, political adversaries set aside their differences and disagreements to prevent that disaster. I thank the Republican leader for his diligent efforts to reach this important agreement. The Republican leader’s cooperation was essential to reach an accord that could pass both chambers of Congress and also be signed by President Obama.

NOOR: But what’s it going to take to make this into a victory for Democrats?

To discuss this, we’re joined by Professor John Weeks. He’s a professor emeritus at the University of London, author of the forthcoming book, Economics of the 1%: How Mainstream Economics Serves the Rich, Obscures Reality and Distorts Policy.

Thank you so much for joining us, Professor Weeks.

JOHN WEEKS, PROFESSOR EMERITUS, UNIV. OF LONDON: Thank you very much for having me. It’s a pleasure to be here.

NOOR: So GOP leaders conceded defeat last night in their objective of repealing Obamacare. But what’s it going to take to make this into a victory for Democrats?

WEEKS: Well, I think that we should think about victories for Democrats and victory for the 99 percent in the United States.

What we were facing was a very far fringe right which was seeking to destroy every remnant of social protection in the United States. And they’ve moved a significant distance along the road, inducing the president to make repeated concessions on how Social Security is funded, the coverage of Medicare, and other issues, those being the most important. So I have very little faith in the Democrats.

The point is that this far-right fringe–I mean, we’re talking about very far right. We’re talking about authoritarian proto-fascist groups, which, if they had won this fight, would have established that they control Congress and would have been in a very strong position at the midterm elections. So that at least has been set back. I think that they thought, they hoped, you know, the Tea Party people, the troglodytes of the Tea Party (I use the technical term of troglodytes or cave dwellers, and they are certainly cave dwellers, supported by some of the richest people in the United States), thought that their moment had come, that if they could force the president to concede on his signature achievement in the social field, then it would be all downhill for him. And they were prevented from doing that. Now, we shouldn’t get too carried away with it, but we should see it as a very important and positive step that was taken.

Now, the Democrats, I’m sure they’re pleased with themselves. They should be pleased in a way. They did hold out. They didn’t cave in like they usually do. However, the question becomes: what will their response be now? And there are many people in the Democratic Party in the Senate and in the House that also want to cut public expenditure and think you can lower the deficit by cutting expenditure. And these people need to be targeted by progressive groups throughout the United States and defeated in the midterm elections, or attempt to defeat them, just as we defeat the far right of the Republican Party, which I very much hope we will do.

NOOR: Isn’t it true that the Tea Party wing in the Republican Party, they’ve managed to control the entire debate, the entire narrative of issues like the debt ceiling, and the Democrats have been unsuccessful so far in really kind of challenging that whole idea that we would have defaulted on the government, the government would have essentially crashed? What’s your response?

WEEKS: Yes, I think you’re right. I think that a combination of ignorance and opportunism led the president and the Treasury–I’m sure the Treasury was receiving instructions from him; their position that they took couldn’t have been taken without the agreement of the president–that the Treasury was more alarmist than almost anybody else. You were saying if, you know, we could default on the debt and if we could default on the debt, financial markets will go berserk, you know, they’d have a conniption fit, and the whole world economy can be brought down into the world as we know it. So we’ve just been drawn back from the brink.

That’s all a bunch of nonsense. There was never any possibility that the U.S. government would default on its debt. None. If you don’t believe me, you can go to Forbes, you know, about as conservative and capitalist a magazine as you can find, and you’ll find the same argument that I’m going to make now. In October, the debt service cost to the Treasury was about $30 billion. True, the total U.S. debt is about $17 trillion, but that all doesn’t come up every month to be paid, and most of it never has to be paid. You service the debt on it because people want to hold U.S. bonds. So we’re talking about covering $30 billion during October. The normal revenue inflow from taxes, income taxes, corporate taxes, other taxes is five, six, seven, eight times that.

And one way you can tell that is that this morning I went on the internet to look at what the interest rate was on U.S. government three-month bonds, 90-day bonds–Treasury bills they’re called. Okay. If you looked at that, you’d discover that there’d been a tremendous jump, a jump of 70 percent, from 0.08 percent to 0.14 percent–in other words, one-hundredth of a percentage point. I mean, if the U.S. federal government is able to borrow money at a hundredth of a percentage point, zero, in effect–it’s negative, actually, when you consider that inflation. So there was never any danger there.

What the Tea Party wanted–and they must have known this. I mean, maybe the more insane ones–we’re talking about relative degrees of insanity here–the more insane ones might have thought, oh, yeah, the U.S. will default and the whole world will come to an end and we’ll seize power. But the more intelligent ones, the Rand Pauls of this [incompr.] they realize that what they–or what they hope they can do is to use this scare tactic to gut social benefits, cut further. And particularly they focused on Obamacare.

And I think progressives are lucky that the Tea Party focused on Obamacare, ’cause that might have been the only thing that would have led the president to have some backbone, because if you–he’d given in on almost everything else. But if he had given out on that, he might as well have resigned, because it would have shown that he had no principles and he had no power, so on. So I think that the–in a way we ought to be pleased that they went for overreach.

But now it has to be–this defeat of the far right, I mean, the lunatic right, has to be turned into something more than avoiding, you know, a fascist outcome. It has to be turned into a reasonable way to advance in terms of policy. And that requires the more progressive members of Congress–in the Senate it would be people like Bernie Sanders and Elizabeth Warren and a few others–to have more influence. I don’t have a lot of faith in that, but it does appear that–at least for the moment, that the far far right has not won the day.

NOOR: Professor Weeks, thank you so much for joining us.

WEEKS: Well, thank you for having me. And I look forward to the next time I’m on The Real News.