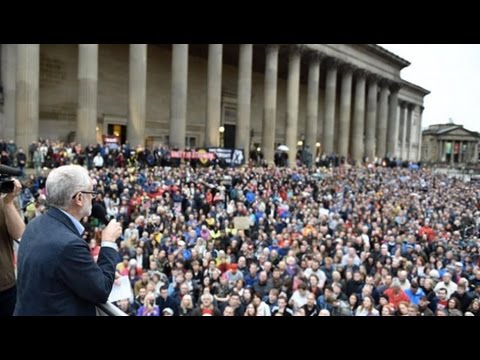 Jeremy Corbyn, the current leader of the Labour Party of the UK, is fighting to stay the leader in spite of the non-confidence vote he got from his fellow MPs of 172-229, where 172 voted for him to leave the party, and some 40 MPs voted for him to stay. The struggle for leadership has been dubbed a fight for the soul of the party by the British press. But our next guest, John Weeks, suggests otherwise. He says this misses the deeper issue of fundamental policy differences around which there has been a lack of debate. And further, he says, it is in fact a battle for neoliberal party members, a battle of the neoliberal party members of parliament versus the grassroots that support the current leader, Jeremy Corbyn, and his social democratic policies.

Here is Jeremy Corbyn in Liverpool over the weekend at a rally attended by thousands of supporters. Let’s have a look.

PERIES: To discuss the struggle going on, I’m being joined by John Weeks in London. John is Professor Emeritus at the University of London, and author of the book Economics of the 1%: How Mainstream Economics Serves the Rich, Obscures Reality, and Distorts Policy. He’s also the author of two recent articles on the issue, titled Understanding the Corbyn Phenomena and Labour Party Leadership Fight for Policies, Not Souls, both published in Dollars and Sense, a progressive economics news and analysis blog. John, thank you so much for joining us today.

JOHN WEEKS: Thank you. Pleased to join you.

PERIES: So, John, on this side of the Atlantic, most progressives, and those who follow UK politics, we know about Jeremy Corbyn, and he’s being likened here to Bernie Sanders. But we know little about his opponent Owen Smith, and the Labour Party’s MP who now is running against him. Tell us more about Owen Smith and the MPs that support him, and how they differ from Corbyn’s.

WEEKS: First, the facts. Owen Smith is 46 years old. That makes him about 20 years younger than Jeremy Corbyn. He is a Member of Parliament from Wales, a traditional–just traditionally strong Labour area. He was, he worked for the BBC before he became an MP. And most controversially, in terms of his position or his hopes for being leader, he was a lobbyist for a large drug company, and in the course of his lobbying was involved with the National Health Service, and lobbying there. So it is alleged by his opponents that he is not a safe pair of hands for the health service, and more generally that he is, you might say, a faux-social democrat, that basically he is a neoliberal.

My own view is that he is a rather undistinguished figure, and the reason he is running is because there is–because relatively little is known about him he can sell himself, or keep selling himself, as a social democrat because it is clear from the polls that have been taken of Labour members and so on, that the members of the Labour Party, the grassroots, does not want another Blairite, another neoliberal. And so the only hope of beating Jeremy Corbyn is to say, I share most of Jeremy Corbyn’s policies, but I am younger, more vigorous, and more likely to get elected. That’s basically Owen Smith’s line.

PERIES: And what are the polls saying at this time, and when’s the vote taking place?

WEEKS: It’s rather–I think American [will find it] a rather strange arrangement. Both people can cast their [inaud.] can cast their vote online or by ballot all this month, and the results are not announced until about the middle of September, which is a rather long, drawn-out process. And there’s no question that stretching it out in that way weakens the ability of the Labour Party to counter a position taken by the Conservatives. That’s what happened six years ago when there was a leadership conflict, and it’s happening again now.

PERIES: And give us a sense of what you think the results will be, where are the grassroots and the rank-and-file of this party compared to the MPs, who obviously voted against Jeremy Corbyn? But where do you think it will come down?

WEEKS: Well, given my excellent record for predicting almost every electoral contest wrong, I will nonetheless say that it, I would be very surprised if Jeremy Corbyn did not win. And I’ll briefly explain why.

The British Labour Party first formed a government on its own in 1945, immediately after World War II. And from 1945-1979, when Margaret Thatcher became prime minister, for that 35 years, it was a hierarchical party which was governed basically by the leaders of trade unions. Some of those leaders were progressive. Some of them were not. And when I say hierarchical, I mean that the MPs in each constituency were, to a great extent, chosen by the leadership of the party, not by the grassroots. The function of the grassroots in the party was to go out and knock on doors, and support the candidate who was chosen from above. And just about every candidate had to be cleared by the trade unions.

Okay. Come the Thatcher period, trade unions are crushed. It goes from a point where trade union membership in Britain is, from where it’s about 50 percent, to where it drops down to about where it is now, down in the 20s. Trade union base of the Labour Party collapses, and Tony Blair comes forward and he transforms or thinks to transform the Labour Party basically into a U.S.-type party, in which by that I mean a party which is not based on membership, but is based on courting voters literally in the open market against the other parties.

And Blair, either because he believed it or he thought it was convenient, thought that what would sell to them was a neoliberal policy. So he had a neoliberal, hierarchical Labour Party, which had lost its trade union grassroots. What happened five years ago was that the rules were changed in the Labour Party. Ironically, the reason the rules were changed is because the neoliberal, the Blairites, wanted to completely eliminate the power of the trade unions, which was waning, in any case, so they went to one person, one vote. Little did they know the consequence of that. Jeremy Corbyn is the consequence. Because despite all of those Blair years, the grassroots of the Labour Party is social democratic.

Just to finish up: so what we’re seeing is the formation of a new type of politics that’s not just a cliche in Britain, going from a hierarchical party based on trade unions to a hierarchical party based on the neoliberal elite, to a mass-based party in which actually the members in your, members at your constituency level, have the power to choose who the leader is.

Now, is Jeremy Corbyn electable? Will he ever be prime minister? I don’t know. But what I do know is that the new electoral scene, scenario in the Labour Party, is such that it will be very difficult to defeat him. And the technique that the Blairites, mostly the people in the parliamentary Labour Party, the technique they’re using is trying to restrict the number of people who vote, ruling out people who join the party after January of this year. Whether or not they’re successful in that, I don’t know. But it appears from polls that have been done of Labour Party members that Jeremy Corbyn is well ahead at the moment.

PERIES: And give us a sense of the platform, or the issues that he is standing behind that’s gaining such popularity among the members.

WEEKS: Actually, just–it’s a very convenient time to answer that question, because he just issued a statement as part of his campaign contest with Owen Smith. He was for ending the British nuclear program. He is for introducing a set of labor laws for all medium and large enterprises which prohibit a number of labor practices and make it, such as zero-hours contracts, I don’t know what they’re called in the United States, that’s basically what, where you just hire someone for the day, with no obligation whatsoever to, even to hire them when they show up at work, make that illegal. And would make it easier for trade unions to organize. So he [inaud.] a trade union bill.

He is, he will eliminate university fees and fund university attendance through general taxation, and he would introduce an industrial policy which–what that means concretely is that there would be a national investment bank which would then support the sort of innovative industries in the private sector. And in some cases there would be joint ownership for the public and private sector.

So there’s quite a range of policy which are, which for–which are not, they are the 21st century equivalent of the social democratic policies which characterized most European left-wing parties at the end of the last century.

PERIES: All right. John, I thank you so much for joining us today. We’ll be keeping an eye on this, and I hope to have you back really soon as this contest gets underway for the Labour Party leadership.

PERIES: Very good. And thank you for joining us on the Real News Network.