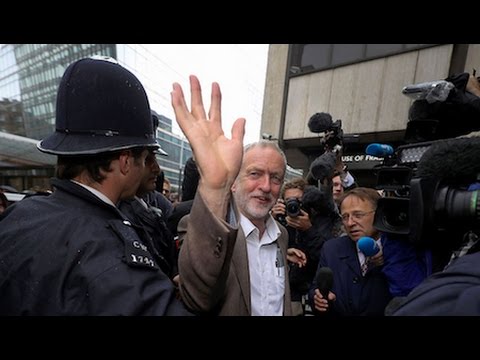 In breaking news, the head of Britain’s opposition Labour Party Jeremy Corbyn learned he will have the right to defend himself from a leadership challenge. This is a key moment for the running battle of control of the party.

Well we now go to London to speak to John Weeks. John is Professor Emeritus of the University of London. Author of the book The Economics of the 1%: How Mainstream Economics Serves the Rich, Obscures Reality, and Distorts Policy. Thanks so much for joining us.

JOHN WEEKS: Thank you very much for having me.

NOOR: So John, obviously the backdrop of this struggle for the control of the Labour Party is the release of the Chilcot report about the Iraq War, and of course the Brexit vote. Corbyn did face an overwhelming opposition in the no confidence vote he recently faced. Talk about what this means: that if the ruling board of the Labour Party has said that he can run, he’ll appear on the ballot and be able to defend his leadership.

WEEKS: Yes, he will need to understand, as you said, the context this comes in. For at least 20 years, the leaders of the Labor Party, the ones before Jeremy Corbyn, were involved in eliminating–purging, you might say–all of the progressive MPs to have a parliamentary Labor Party which was overwhelmingly centrist and right wing neoliberal. Tony Blair was very effective in doing that, and his successors did not change that.

So he came to control a party whose members supported him strongly and supported his social democracy. But his members of Parliament were neoliberals. All right. The members of Parliament have, the overwhelming majority of them, have been plotting to get rid of him since the day he was elected, which was the middle of September last year. All right. They have seized this moment to do it. The problem can be stated simply. If they run against a Social Democrat, Jeremy Corbyn or someone else from the left of the party, they will lose.

Their only hope of regaining their control, their neoliberal control of the party, was to keep Corbyn off the ballot. And I can only assume that the woman who announced that she was going to challenge Corbyn thought that today the executive committee of the Labour Party would vote to keep Corbyn off the ballot. The vote, in fact, was very close, 18 to 14. Now I think for all of Jeremy Corbyn’s problems, he is certain–well, nothing is certain in this world–I would predict that he will be reelected leader of the Labor Party.

NOOR: And some say that if he is reelected that’s going to mean that the Labor Party will split. The more centrist or conservative members will form their own party like what happened in the ’80s. And that’s going to mean that Labour’s not going to be a force that is going to have much of a say in what happens during the Brexit, which it appears the new prime minister will be going forward and pursuing. And we’ll talk more about that in the second part of our interview. But I want to just get your thoughts and your response if this means that if Corbyn is reelected, there will be a split in the party?

WEEKS: I–you never know what’s going to happen in the future. We’ve had very unusual things happen in Britain over the last few days. My inclination is to say that yes, there will be a split in the party. If Corbyn had been excluded from the ballot, the party wouldn’t have split, it would have declined. There would’ve been a great drop in the membership. All of those people who had supported Corbyn would’ve been disgusted and got out. Now that he is going to run, I think that the possibility of a split is very great. I would say one should be careful on jumping to conclusions when extreme things like that. But I would say it’s very possible.