Labour Prevented the Tories from Increasing their Grip on Government 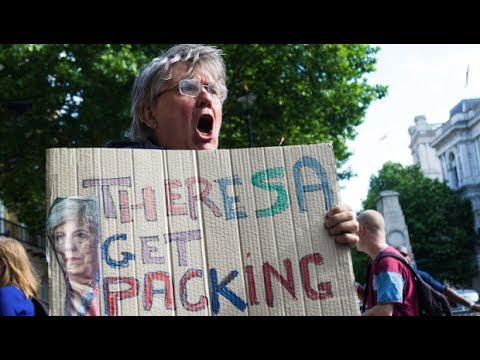 The UK general election votes have been cast, and the results are nothing short of remarkable. Contrary to the early predictions of disaster for the main opposition Labour party, and for its leader Jeremy Corbyn, it was instead Theresa May’s Conservative party that suffered a heavy blow. The conservatives lost 12 seats in parliament and the Labour party gained 31 seats, eliminating the possibility of the Tories governing without a coalition partner. Jeremy Corbyn called the results incredible and called into question the Prime Minister’s ability to continue to govern.

Gregory Wilpert: Meanwhile, Prime Minister Theresa May appears determined to cling to power. She has gone to the Queen to formally ask permission to form a government in coalition with the Democratic Unionist party of Northern Ireland. Joining us today to discuss the UK election results is John Weeks. John is professor emeritus of economics at the University of London and author of “Economics of the 1%. How Mainstream Economics Serves the Rich, Obscures Reality, and Distorts Policy.” Welcome back, John.

John Weeks: Thank you very much and pleased to be here.

Gregory Wilpert: The mood in the UK must be one of mixed [chalk 00:01:38] and jubilation I would imagine. What does this mean for the future of Jeremy Corbyn as a leader of the Labour party?

John Weeks: Yes, first let me say for the North American watchers. Imagine if Bernie Sanders had been nominated last year, and Bernie Sanders had run against Donald Trump. People would have said “this is the most important election in the United States since 1933 when Roosevelt ran against Hoover.” In Britain, this election was the most important election since 1945. It was an election between social democracy and neo-liberalism. And there have not been a clear social democratic leader of the Labour Party since 1945. A lot was at stake. If Jeremy Corbyn had been beaten badly, which many people predicted, then the important thing would not have been Jeremy’s defeat, but the defeat of social democracy. But instead of that, he fought Theresa May to a draw. We shouldn’t exaggerate. We can’t call it a win. You win by getting more seats than your opponent. He didn’t get more seats. He didn’t get as many seats. But he stopped the Tory government from establishing a overwhelming majority, which was a purpose of this election, and that was a tremendous step forward.

Now what does it mean for the future? I think that the possibility of the Labour party forming a government is very slight. I won’t go in details of the numbers. You’ve probably done that in other programs. It would have been very difficult for the Labour party to put together a majority, even a implicit majority much less one based on a formal coalition. If they had, they would be quite weak. In a way, while I very much wish the Labour party had run outright, the circumstances of Theresa May trying to struggle through with a weak government supported by what I might say one of the most right wing parties in Europe: homophobic, denying climate change, the whole thing. It’s probably to the Labour party’s advantage that the opponents be in that weak position. Having said that, I hope very soon that we will see a Labour government. It’s not clear the route to that Labour government at the moment.

Gregory Wilpert: What would you say this means for Theresa May as a leader of the conservatives? How is it that she’s able to remain as Prime Minister, and what effect will it have on the politics of the country to join with the DUP of Northern Ireland?

John Weeks: I have some knowledge of the Labour party. I have almost no knowledge of the inside workings of the Conservative party, but from reports it appears that the Conservative party’s quite split. Theresa May has her enemies. She had her enemies before this election, and she went it. It was very much a individual circle presidential type campaign. The issue of the election, she was going to bring leadership. She was going to have a strong hand to negotiate with the feckless Europeans, so on. She failed. If Jeremy Corbyn didn’t score great victory, she scored a great defeat. There’s no question about that. Jeremy Corbyn put a defeat on her. Okay. Now. I think she will not last long. I think she went so quickly to the Queen given the protocols of the British system, she had to go to the Queen to be anointed as the former governor. I think she did it quickly to prevent her enemies within the power of removing her. Because earlier this morning there were already rumors that Borris Johnson who is the foreign secretary, and some others, were plotting against her. I think she will not last terribly long as Prime Minister.

Gregory Wilpert: What do you say that this result will mean for the Brexit negotiations? The negotiations to leave the European Union?

John Weeks: I think that as long as the Conservative Party is in power, the negotiations will be extremely difficult. That is because the Conservative party has a majority of its MPs, or its Members of Parliament, who are vitriolically anti-Europe to a almost pathological extent. So therefore it will be difficult for any leader of the Conservative party, be it Theresa May or the person who as I say she’ll be replaced. It will be very difficult for them to have a civil negotiation with representatives of the European Union because Theresa May will be continually being sniped at by her own party.

Gregory Wilpert: What do you think leaving … We’ve talked about this with you before, but just give us a brief summary of what the departure, what the Brexit really means for the UK economically speaking?

John Weeks: At the end of April, I appeared before the German parliament, a committee of the [Budenstag 00:07:51], committee on European Union and gave a so-called expert evidence on the costs of the Brexit and the view from the United Kingdom. On the basis of that discussion … The other people who testified were all German except from one other British. On the basis of that hearing, on the basis of talking to people afterwards, it is my impression that a reasonable agreement could be reached. One that would not be terribly damaging to the UK economy or to Europe. Germany’s second largest trading partner is Britain. First largest trading partner is China. Second is Britain. Germany has a very large trade surplus with Britain. The German capitalists are very concerned. I spoke to one of their representatives, the head of the like the American Association of Manufacturing, the German equivalent. He was very concerned about the future of German industry should there be a so-called hard Brexit But he said in his testimony as well as to me privately was that German industry is happy to grant Britain the right of limitations on immigration if that is the cost of maintaining the trade relations that exist now. So I think something like that will occur.

Gregory Wilpert: Just turning quickly again to the politics of the situation. I’m just wondering, what effect if any did the two terrorist attacks have in the weeks before the election on the outcome of the vote?

John Weeks: Certainly those of us who were supporting the Labour party … And by the way, let me say here that I’ll confess that I had my moments of doubt, and the leadership of the Labour party proved that I was a nervous Nelly. They were unnecessary, unfounded those doubts. To answer your question, I think a lot of us, many people, perhaps even leadership, Labour party itself, were afraid that those terrorist attacks would be used successfully to strengthen the Conservative’s election position. I don’t think that was done. What their net effect was, is hard to say. It is my feeling – I can’t prove this – it is my feeling that on the balance, Theresa May’s response to them put voters off and in particular when just three days ago she said, “I will tear up every human rights law if that is what’s necessary to protect the British people from terrorism.” I think that put a lot of people off. First of all, just the offensiveness. What are we fighting for here against the terrorism? We’re fighting for freedom. All this stuff about how the terrorists hate us. What do they hate us for? It’s because of the freedoms that we have. So how are we going to deal with them? By getting rid of our freedoms. You know, it’s a complete hypocrisy.

I think that the effect could have been disastrous for our Progressives, but it turned out that the British people, British voters, were more enlightened than I thought, and it doesn’t appear that it had a negative impact.

Gregory Wilpert: Okay. Well, unfortunately we’ve run out of time. We were talking to John Weeks, professor emeritus of economics at University of London. Thanks again, John, for being with us here today.

John Weeks: Thank you very much for having me.

Gregory Wilpert: And thank you for watching the Real News Network.