John Weeks, author of Economics of the 1%, says it's really the German government that is flexing its muscles regarding Greece despite that the IMF recognizes the entire Greek debt can never be paid in full

John Weeks, author of Economics of the 1%, says it's really the German government that is flexing its muscles regarding Greece despite that the IMF recognizes the entire Greek debt can never be paid in full 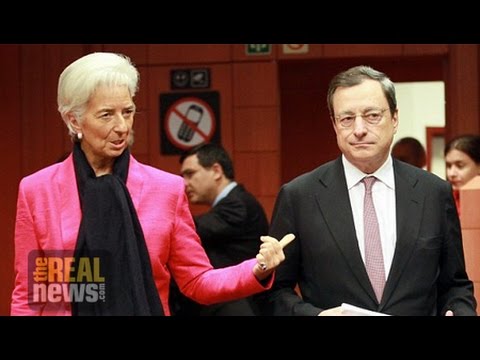 The G7 meeting has concluded in Berlin, and there’s a statement out. One of the topics of discussion was of course Greece. The IMF wanted to restructure and write down the Greek debt last week, but this was overruled in a secret meeting of the European leaders and the Troika to which Greece prime minister Alexis Tsipras was not invited. Then the lenders announced a unified position on the debt, which was the same message: conform to what previous Greek governments had agreed to, essentially forcing Greece to make a tough political decision and betray the Syriza promise to end austerity.

However there was a bit of relief, or what appeared to be relief, that the Troika is allowing Greece to consolidate its payment that was in theory due on June 5th, but now it’s allowing it to make its payment in a consolidated way at the end of the month. So this means, technically, Greece is not yet in default. However, this big payment is coming due at the end of the month.

This is our next topic of discussion with our guest John Weeks. John is joining us from London. John is Professor Emeritus of the University of London, and author of the new book The Economics of the 1%: How Mainstream Economics Serves the Rich, Obscures Reality, and Distorts Policy.

John, as always, thank you for joining us.

JOHN WEEKS, PROFESSOR EMERITUS, UNIV. OF LONDON: Thank you for inviting me.

PERIES: So John, give us an update of what has happened to date and what the discussions have been in terms of addressing the Greek debt, both at the G7 as well as leading up to the June 5th payment.

WEEKS: The reality is the following: that the German government is what is behind, is driving the Troika’s position, everyone else is a bit player, and they have no intention of coming to an agreement with Greece. I recently just on Monday was on a program with a member of the Greek Debt Truth Committee, Ozlem Onaran, and she told me on that program that the Greek government has information from the German Ministry of Finance, you might say a mole, that whenever the Troika and the Greeks appear to be close to a agreement, a new condition will be put in to prevent that agreement from occurring.

And so I think there will be no agreement. This extension to the end of June, which I should say is the right of the Greek government, IMF rules allow for what’s called bundling of your payments towards the end of the month. That that is a faux relief. It just further strings it out. And you might ask, why is this being strung out. And the reason it’s being strung out is because the basic conflict here is not over the Greek debt. As you mentioned, the IMF recognizes that the entire Greek debt can never be paid. And I’m sure that the German finance ministry must recognize that also.

WEEKS: Yes. Well, I think I can go out on a limb. I haven’t been terribly good with predictions in the recent past. But I think that we are now coming to an end of this fake process of negotiation, and the decision you referred to of whether to completely capitulate or to drop out of the Euro is coming very soon.

And the way I think it will happen is the following. That the Syriza government is not prepared to completely capitulate, and if they did they would be thrown out, and a government would be put in their place which would not capitulate. Because the polls show that 60-70 percent of the Greek population is opposed to austerity policies. So that’s the first thing, there won’t be capitulation. So therefore the only alternative will be withdrawal, exit from the Euro. And I think the way that will happen is that at some point, perhaps quite soon, the Syriza government will announce that it cannot reach an agreement with the European, with the Troika. Cannot reach an agreement with the Troika, and they will hold, announce an election. I think it will be a parliamentary election, not a referendum, in which they will ask for a mandate to–I don’t know if they’ll actually specify withdrawal from the Euro, but it will be clear that that’s what they are planning to do.

PERIES: Now, some people are speculating that Greece will default on their payment and not exit the Euro, wait to be forced out by Berlin or the European Union itself. What do you think of that speculation?

WEEKS: Well, it’s possible. [Incompr.] would say we should get out of the Euro, but it is premature to do it now.

I think the problem with that scenario is a very practical one, that if the Greek government defaults, and there’s a lot to be said for that because the government is running a budget–small budget surplus at the moment, and it is also running a trade surplus. So it’s in, I don’t want to say a strong position, but it’s at least not in a terribly weak economic position. The problem is if it stays with the Euro, it will find its currency–in effect the money supply available in Greece will be determined by exports and imports. Because if you import more than you export then there’s an outflow of currency. And if you’ve got the same currency as your trading partners that means that you don’t have anything to replace what is flowing out.

So I think that they’ll, if they try to keep the Euro, which I think they might temporarily because it’s an awkward transition to go to a, from a common currency to a national currency, in fact I don’t think any country has ever done it successfully beforehand. So there’ll be a transitional period. But I would not, I would expect that not to be more than a few months. The government will start to issue IOUs in Euros to pay people, and to pay its bills. And the tactic, that will be a tactic in order to redenominate those in drachma. I assume it will be called the drachma.

PERIES: John Weeks. Thank you so much for joining us today and giving us that quick update.

WEEKS: Well, thank you for having me along, and we’ll soon see whether or not there’s any truth to my anticipations.

PERIES: Thank you, John. And thank you for joining us on The Real News Network.