John Weeks: Neo-liberal economics has concentrated tremendous political power in the hands of corporations and the elite and has had serious ramifications for democracy

John Weeks: Neo-liberal economics has concentrated tremendous political power in the hands of corporations and the elite and has had serious ramifications for democracy

The Economics of the 1% 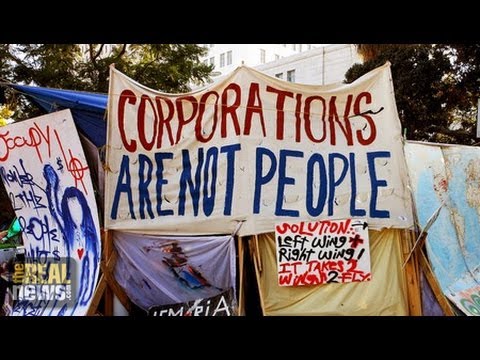 This is the third and final part of our discussion about the new book Economics of the 1%. We’re joined again by its author, John Weeks. He’s a professor emeritus at the University of London, and he’s a regular contributor to The Real News.

Thank you so much for joining us again, Professor Weeks.

JOHN WEEKS, PROFESSOR EMERITUS, UNIV. OF LONDON: It’s a great pleasure to be here. Thank you. And I will try to sum up in a relatively brief and focused way.

NOOR: Yeah. So, Professor Weeks, we wanted to talk to you in this final segment (and you can watch all three segments at TheRealNews.com) about the impacts of this accumulation of wealth, this ideology of the 1 percent, what impact that has on democracy in our society today.

WEEKS: It has an extremely pernicious impact. I think that in the 1920s, the 1930s, the world was characterized by a clear conflict between authoritarianism and democracies, and for the most part the democracies were weak until the rise of trade unionism in the United States in the 1930s and Roosevelt came to power.

Now the source of authoritarianism is not fascism or centrally planned economies; it’s the ideology of free markets, because what that ideology seeks to do is to say there’s no effective role for governments, governments should be minimized. Yet governments are the vehicle by which we the 99 percent assert ourselves.

The market, markets for financial products, for whatever, that is the territory of the 1 percent. They control it. They control the production. They control the distribution. There are some products which are more competitive than others, but overall there’s been a tremendous movement towards concentration of economic power.

Our only hope is to assert the control of the 99 percent over those markets. And the way we would do it is by acting through our collective representatives, who are doing a pretty hopeless job now. But we should not despair. That is the only route that we have in order to control the power of the 1 percent in markets. Until we do that, we will have a market economy controlled by the Microsofts and the Googles and the other massive corporations–Amazon–which not only control the market but dictate the nature of the labor market. And the only way for us to escape from that is to assert our collective will through our elected representatives.

NOOR: So, Professor Weeks, I imagine you got your title, Economics of the 1%, from the Occupy movement, which really kind of framed this debate as the 1 percent versus the 99 percent.

NOOR: So the Occupy movement really was trying to work outside of the political spectrum. And, obviously, the encampments have been cleared, months ago by now. What do you see as the next evolution for this, the challenging of the 1 percent’s power? Do you think the only venue is through electoral change?

WEEKS: Well, I think electoral change means a lot of different things. I mean, this is really getting us into a very broad–so this will be the subject of my next book, which will be called Free Markets and the Rise of Fascism.

I think that, as I’ve written in The Real News, it becomes a question of what position we take on democracy, and then on what form we think it will take. I think we need to have some form of electoral democracy. I think participation at the grassroots level is extremely important. But you can’t control and regulate Microsoft by consumer groups scattered around the United States. You have to have a centralized structure, because Microsoft is certainly centralized and it can pick the little players off one at a time.

So I agree it is a very difficult situation. But I would just say to people your age that don’t give up on democracy, participation of the people as a vehicle for radical and nonviolent change.

NOOR: So, Professor Weeks, you really sought out to break down and explain the complexities of modern economics in layman’s terms, and I think you did a great job doing that with your new book, Economics of the 1%. Thank you so much for joining us.

WEEKS: Well, thank you so much for having me.

NOOR: You can follow us @therealnews on Twitter. Tweet me questions and comments @jaisalnoor. And you can go to TheRealNews.com for the full three-part series with Professor Weeks.