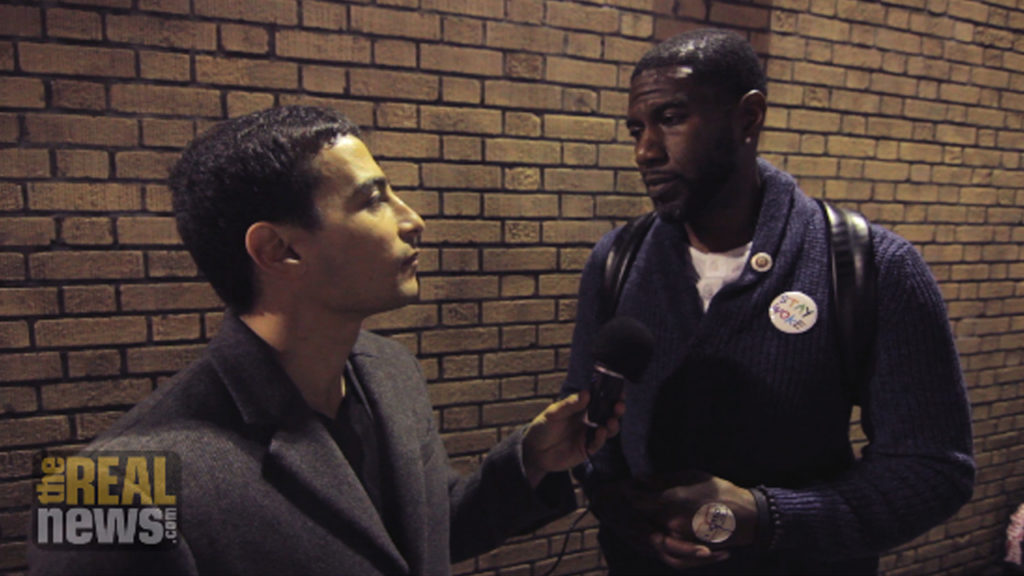 AARON MATE: I’m here with Jumaane Williams. He is a New York City Council member, soon to be candidate for public advocate, right?

JUMAANE WILLIAMS: That is correct. We announced our intention, should Tish James become the first Black elected woman attorney general, just got the text that actually has happened, so we’re excited. So we’ll be announcing officially after we enjoy these wins and mourn the losses,

AARON MATE: Well, let’s talk about the wins first. We’re here at the victory party for Alexandria Ocasio-Cortez. Your thoughts on her historic victory, the youngest woman ever elected to Congress?

JUMAANE WILLIAMS: It’s simply amazing. Here in New York state and even across the country, her win inspires so many people who were trying to figure out if they can ever go against the machine. She said you can not only go against it, you can win if you organize, if you have the right message. And so, I’m excited, excited on primary day, I’m excited now. What I hope we do is get away from kind of saying, well let’s see what she does now. We’ve got to see what we’re going to do, because we can no longer just elect people and walk away. We have a tendency to do that. We elected her, we have to now continue to give her the strength she needs to get in a place that is tough terrain for anyone, much less someone who’s just coming in. But that’s the kind of fresh ideas that we need. We just have to make sure we continue to empower.

AARON MATE: You just ran against the machine, you ran for lieutenant governor. And I’m wondering what you took away from that race, that was a heated race. I mean, your opponents ran attack ads against you that mentioned you having personal debt as if that was like a knock on your candidacy. What did you learn about running against establishment Democrats in that race and how can the lessons you’ve learned help candidates across the country, like what can they take away from that?

JUMAANE WILLIAMS: Well, I think the debt and discussing my foreclosure, I think she gave me a couple of points since so many people in this country and this state are dealing with debt or dealing with foreclosure. And that’s actually something I’ve never hidden, I actually talk about it because I want people not to be ashamed and seek the assistance that they need. But what we knew about establishment Democrats we’ve always known. Unfortunately, they are much closer, they use a Republican playbook much more often than we care to admit. And here in New York State, we want to make sure that the Republican Governor candidate didn’t win, so I told everyone in the Working Families Party.

But we have the hold these Democrats accountable, particularly the establishment Democrats and the corporate Democrats, where incumbency protection is the only thing they really care about at the expense of the people of New York City, of New York State. And I always say, we didn’t get to this place of the orange madness simply because of Republicans. In many areas, we got it because of Republicans who refuse to have the courage to stand up. So now that we did what we had to do in New York State, we have to hold this governor, this lieutenant governor, accountable. The criticism I put forth still exists. Leadership takes courage, it takes vision, it takes risk. We have to demand that our Democrats do that. The seats they hold can’t be important than the people they’re serving.

I’m mourning, because there’s a few governors’ races that we should have gotten in Maryland, where you’re from, obviously in Florida we thought we would get that one, in Georgia. That seems to be a huge case of voter suppression that was going on. But taking the House, I think is a bright light in that at least somewhere in America, people are saying we’re going to repudiate and reject what is going on in this country right now. And just back to past question, the race that we ran, if I had four additional points we would have won. And we came closer, we got more votes than any non-white candidate ever in a state-wide primary. We won in New York City. My opponent had over two million dollars, the governor had thirty million, spent about ten on my opponent. I raised about 350,000 dollars.

That shows that even though people told me my message wouldn’t work, being a principled elected official, having a vision that is not about pay to play but about the people, that showed me- and the lesson was that I hope you take away, people are ready for this kind of vision. People are ready for the vision that puts folks first and we don’t have to do the pay to play, we don’t have to play politics as usual. People are intelligent enough and they’re ready for it. And I hope we take our lesson and move forward.

AARON MATE: Jumaane Williams, thanks very much and best of luck with your candidacy for public advocate.

JUMAANE WILLIAMS: I appreciate it. Thank you.