In a major blow to partisan gerrymandering, a panel of federal judges ruled that North Carolina's congressional districts are unconstitutional and must be redrawn before the 2018 midterm election. The decision boosts other efforts to reverse gerrymandering in the US, explains Dan Vicuna of Common Cause

In a major blow to partisan gerrymandering, a panel of federal judges ruled that North Carolina's congressional districts are unconstitutional and must be redrawn before the 2018 midterm election. The decision boosts other efforts to reverse gerrymandering in the US, explains Dan Vicuna of Common Cause 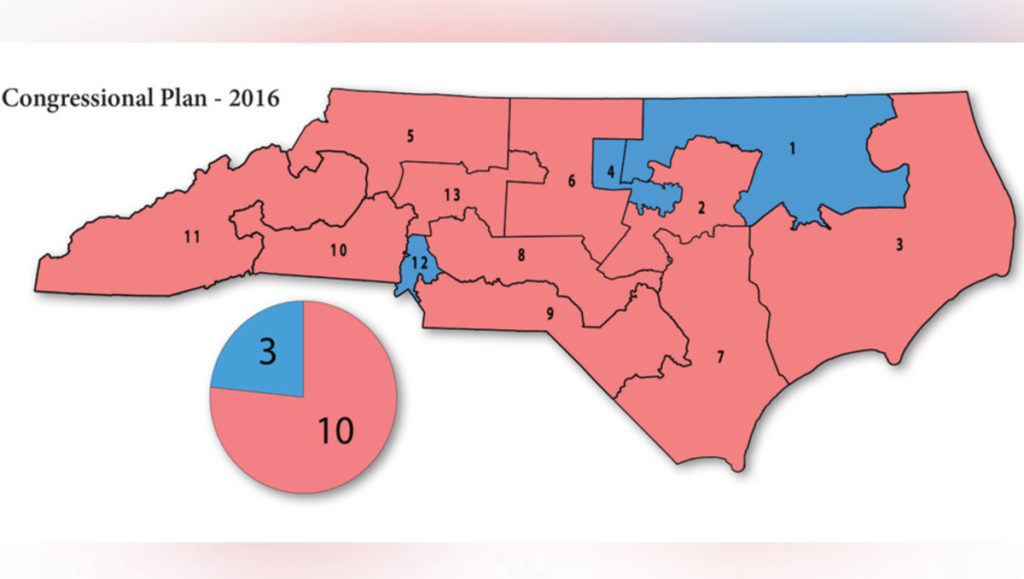 GREGORY WILPERT: Welcome to The Real News Network. I’m Gregory Wilpert coming to you from Quito, Ecuador. A panel of federal judges declared North Carolina’s Congressional districts to be unconstitutional last Tuesday. According to the judges, the district maps are drawn in an extremely partisan way designed to give Republicans practically permanent advantage in races for the U.S. House of Representatives. Back in 2016 when the North Carolina legislature last redrew its district maps, Republican state lawmaker, David Lewis, reportedly even said, “I propose that we draw the maps to give a partisan advantage to 10 Republicans and three Democrats because I do not believe that it’s possible to draw a map with 11 Republicans and two Democrats.”

The judges’ decision, written by a Judge James Wynn, Jr., cited a 1969 court decision saying, “On its most fundamental level, partisan gerrymandering violates the core principal of Republican government that voters should choose their representatives, not the other way around.” Joining me now from Los Angeles to discuss the judges’ decision is Dan Vicuna. Dan is the national redistricting manager for Common Cause, one of the main plaintiffs in this case. Thanks for being here, Dan.

DAN VICUNA: Thanks so much for having me.

GREGORY WILPERT: So give us first of all a brief summary of the decision. What exactly is unconstitutional about North Carolina’s congressional districts and why?

DAN VICUNA: Sure. A short bit of background here, the North Carolina legislature first drew a congressional map after the last census, after the 2010 census, and two of their congressional districts were struck down as an illegal gerrymander. The court said you’ve packed African-American voters into just a couple of districts in a way that eliminates their ability to affect the map, affect any of the surrounding districts, and that was very intentional as a way of giving Republicans an advantage in the state.

What the court then ordered them to do in 2016 was to re-draw districts, and that’s where the quote you mentioned came from. The legislature said very publicly, “Look, this is not going to be any kind of racial gerrymander. What we’re going to do is draw these districts to ensure that Republicans maintain control of 10 of 13 seats in our congressional delegation despite the fact that the state is basically evenly split between the parties.” And so Common Cause — and we were joined by the North Carolina Democratic Party and some individual voters in the state — we said that it is a clear case of an unconstitutional, partisan gerrymander. So we sued on the grounds that this violated the First Amendment rights of those targeted voters, because they were targeted because of their speech, because of their support for Democratic candidates. We said this is an equal protection violation by, again, mistreating Democratic voters in an invidious manner.

And a couple of other Constitutional provisions related to the way that the popular election of the House of Representatives members, saying that this goes far beyond the states’ power to regulate elections, the time, place, and manner of elections. This is actually dictating outcomes. It also violates a provision of the Constitution which states that the House of Representative members must be elected by the people. Basically, a lot of these members of Congress are being elected by legislators. These districts were pre-determined in the drawing of districts. So that was our constitutional challenge.

And several weeks after we filed our case, the League of Women Voters, represented by Southern Coalition for Social Justice and Campaign Legal Center, filed a separate lawsuit on slightly different grounds using some slightly different constitutional provisions. Fortunately, we really won on all counts. The three-judge panel — again represented by an Obama appointee, a George W. Bush appointee, and a Jimmy Carter appointee — unanimously stated that this was a clear violation of fundamental constitutional rights of the public. Two of the judges agreed that this was both a First Amendment and equal protection violation, along with those other popular election provisions I mentioned.

The third, the George W. Bush appointee, said that this was only a violation related to those popular election Article 1 sections. But in the end, it was a sweeping victory. The way these cases work, they have sort of an unusual route through the court system. They go straight from a three-judge panel. The North Carolina’s legislature’s already stated that they will be appealing the decision and this will go straight to the U.S. Supreme Court, which we imagine a decision could, oral arguments could happen within a year.

But in the meantime, the trial court has ordered the North Carolina legislature to re-draw districts. And recognizing the likely possibility that this legislature, which has again and again violated the constitutional rights of North Carolinians, that they cannot do the job. It’s also going to hire its own map drawer to do an alternative remedial map to make sure that the people of North Carolina get fair representation.

GREGORY WILPERT: So what is the larger significance, though, of this decision? It’s not a Supreme Court decision, but do you expect that it will have an impact beyond North Carolina and other states where gerrymandering is blatantly partisan?

DAN VICUNA: I do. I think this is part of a recognition, both among activists all the way up to the judiciary, that you’re not seeing your grandfather’s gerrymanders anymore. This isn’t a time when maybe both parties got together and they were drawing on paper maps on the ground, and making an educated guess as to how they could protect both parties’ incumbents. This has become something that can be done with incredible scientific precision. Using big data, consumer information, and combining that with voter histories, you can fairly accurately pre-determine the drawing, who’s going to win in a given district basically for the entire decade.

So what we’re seeing is that the judiciary is recognizing that you certainly can’t rely on self-interested politicians to do something about this. It’s absurd to think that they’re going to reform themselves, so they’re starting to act. The Supreme Court has already stated in very recent cases that partisan gerrymanders were incompatible with democratic principles. They heard the Gill v. Whitford case in October, which we’re waiting for a decision on. And in a surprise move, they agreed to hear a case, a Democratic gerrymander out of Maryland, which strongly suggests they may want to decide the Republican and Democratic gerrymanders together and finally set a standard, an outward-bound for stating that partisan gerrymandering is unconstitutional. And this North Carolina case is a recognition that I think, being led by the Supreme Court’s recent action, a recognition by the judiciary that something’s got to be done; that this is an assault on basic democratic rights, the likes of which we haven’t seen before.

And so if the North Carolina case is somehow joined with these cases the court is going to decide on shortly, or it’s decided shortly after, we’re very likely in 2018 to see significant action at the very highest levels of our court to stem partisan gerrymandering. So it’s a really exciting development and we look forward to, again, providing fair representation to all Americans.

GREGORY WILPERT: You’ve kind of addressed my next question already, but I just wanted to kind of re-emphasize that gerrymandering has been an issue practically since the country’s founding. Actually, the word gerrymandering has its origins in 1812, when Massachusetts Governor Gerry created a congressional map that resembled a salamander. But just how serious now is the problem, would you say? Or how has it become? Is partisan gerrymandering, in other words, worse now than it has been in the past? And I think you’ve already kind of answered that question, but are we getting any closer now to resolving this problem once and for all? Do you expect the Supreme Court, given that it’s probably going to have a conservative majority, to really reform this?

DAN VICUNA: So, just to fill in a little bit more of what I mentioned of sort of how things have changed, we have seen social scientists who use various … There are a lot of creative, interesting measures out there to determine how bad a gerrymander is. And it’s not only what I discussed, about the use of big data and combining it with voting histories, and really using scientific precision. We also know on the back end the social scientists are looking at the results of elections and the way districts are drawn, and seeing that in fact, the most recent gerrymanders – actually districts that were re-drawn after the 2010 census – are, in fact, historically worse by far than going decades back when we thought those were bad gerrymanders. So there is definitely a significant difference in how rigged elections are becoming.

And I think in terms of the Supreme Court’s likelihood of action, as usual the big question mark is Justice Kennedy. I think in oral arguments for Gill v. Whitford, the four left-leaning judges or those that were appointed by Democrats seemed open to the idea that it’s time to act on this; that gerrymandering is a clear assault on democratic freedoms, and that the judiciary … it was a worthwhile enterprise to try to determine a workable judicial standard to do something.

Justice Kennedy had some tough questions, I think, for Wisconsin and those defending the Wisconsin gerrymandering. And he asked specifically a hypothetical which fits perfectly with the North Carolina case we just won, which was he asked, “Would a map be unconstitutional if the legislature wrote in law that there had to be discrimination against one party?” And he got the attorney representing the Wisconsin legislature to concede that that would, in fact, likely be a First Amendment violation. Well, that’s exactly what we see in North Carolina, where the legislature made partisan advantage a specific criteria of the drawing of districts. So we think that the North Carolina case fits perfectly with the direction in which Justice Kennedy, the swing vote on the court, is looking to go; we think that.

But possibly even before he gets to our North Carolina case, I think the questions he asked, the concern he demonstrated both in the oral arguments for Gill and a previous decision where he signed on to the idea that partisan gerrymandering is contradictory to democratic rights, I think he’s gettable. I can’t imagine that he wants his legacy to be providing kind of a stamp of approval for gerrymandering, but we’ll have to see what happens.

GREGORY WILPERT: Okay. Well, we’ll definitely come back to you once we get a further development in this case. I was speaking to Dan Vicuna, National Redistricting Manager for Common Cause. Thanks again, Dan, for having joined us today.

DAN VICUNA: I appreciate it. Thank you.

GREGORY WILPERT: And thank you for watching The Real News Network.

Dan Vicuna is the national redistricting manager at Common Cause. He manages the organization’s amicus brief campagns in the Supreme Court and supports Common Cause’s state organizations in their efforts to end gerrymandering.