Growing Discontent with Corruption Brings Thousands of Russians to the Streets 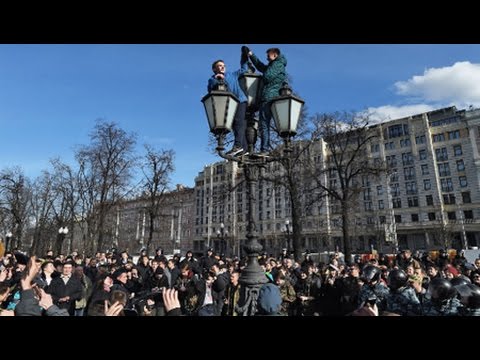 Between five and 10,000 Russians took to the streets in several cities on Sunday. According to the protest organizers, over 1,000 demonstrators were arrested for unlawfully protesting, including the main opposition leader Alexei Navalny, who called for the anti-corruption protests. Most of the protesters were released by Monday, but Navalny received a 15-day prison sentence. The protests were directed against Prime Minister Medvedev, who Navalny accuses of large-scale corruption.

Joining us to discuss these developments from Moscow is Jeffrey Tayler. Jeffrey is a contributing Editor at the Atlantic, and the author of seven books. He has lived in Moscow since 1993, and recently outlined his proposal for a new détente, between the U.S. and Russia, on Quillette called, “The Deal Trump Should Strike with Putin.”

I thank you so much for joining us, Jeffrey.

SHARMINI PERIES: So, give us a sense of what happened there on Sunday. I understand the Moscow demonstrations took place just a few blocks away from where you are.

JEFFREY TAYLER: Yeah. The opposition leader Alexei Navalny called for a demonstration, as you said, against Prime Minister Dmitry Medvedev who was president for four years, from 2008, I believe, until 2012. And the Navalny report accused him of massive corruption, of having yachts and mansions all over Russia. And, as a result, people turned out and in the largest protests since 2012.

There was a march after the murder of Boris Nemtsov, an opposition leader that probably… that had far more people, but it was permitted by the authorities. In this case the authorities offered them two other venues outside of the center to hold the protest. But Navalny decided to call people into the center of Moscow. And it seems like between five and 8,000, possibly 10,000 showed up.

SHARMINI PERIES: Right. Now, I understand a lot of the people that were arrested, some quote 5,000 to 8,000 people showed up, but about a 1,000 of them were arrested. A lot of them were released by Monday morning with citations. But 120 of them are still being held, according to The Guardian.

Do we know the plight of these protesters that are still under custody?

JEFFREY TAYLER: No. I assume that they will be charged with attending an illegal demonstration and could get a number of days. But, it seems like Alexei Navalny, the leader, will get the maximum sentence for this event, which is 15 days, and he was fined also, about $320 or so, roughly.

SHARMINI PERIES: Now, as there might have been protests in 2011, 2012 of this size and nature, but in spite of that, President Putin was very popularly elected, and he still remains popular in Russia, in spite of these protests. Give us a sense of his approval ratings, which I’ve read sometimes they’re over 80% approval rate. Is that really what’s going on? Is he this popular?

JEFFREY TAYLER: Yeah, I think you could say those ratings are accurate. It’s pretty rare to see somebody voicing disapproval of the President, beyond the normal griping that you would see. So, he’s been in power now for 17 years. But the problem that he faced in the past, was that the big cities, namely Moscow and St. Petersburg, were more oppositional.

The people here are more enlightened, more keyed in to international life, and they were the ones who came out in the greatest numbers in 2011 and 2012. But also, on Sunday, this was probably the biggest demonstration in Russia. However, people came out in quite a few smaller towns, and cities way out in the hinterland, which surprised everybody.

SHARMINI PERIES: And what kind of politics does the opposition leader, Navalny, represent?

JEFFREY TAYLER: Well, this has been a problem. In this case, it was an anti-corruption demonstration. And that’s a very popular theme here, and it’s a recognized problem. A problem that the Russian government recognizes, and is taking measures to deal with, but the problem persists. So, the opposition in the past, in the larger demonstrations, far larger in 2011 and ’12, was contesting the results of the Duma elections, that’s their parliament elections, in December of 2011. And they were saying the vote was rigged.

And so, the slogan then — For Free and Fair Elections. There was really very little concrete discussion of what would come after. So, the main call of the opposition leaders was that Putin had to go. And at one point they were saying they would re-do the elections, but they gradually lost that, and Russia Without Putin, became the slogan before, eventually Putin was re-elected and sworn in about six months later.

SHARMINI PERIES: All right. Now in terms of these protests and the allegations of corruption, are there any valid reasons for this pursuit on the part of the opposition leader, and if so, what are they?

JEFFREY TAYLER: Well, I suppose his site is only in Russian, but he has a very well respected site, it’s called RosPil, in which he presents all of the allegations that he has, not just against Prime Minister Medvedev, but others. And those are generally not contested, or not heavily contested. And there was even talk that the government wanted the site to keep operating, because it allowed them to figure out who was corrupt in their midst.

So, this is basically the approach he has, it’s focusing on corruption, that is, he wants to clean Russia up. Because people encounter corruption here so often in their daily lives, at least it’s not uncommon, this is a theme that resonates with everybody.

SHARINI PERIES: All right. And are there any government efforts going on at this time, to deal with some of these corruption cases, that they’re pointing the finger at?

JEFFREY TAYLER: Well, with Medvedev, no, that’s pretty recent. But, there was a high profile arrest, of the Ministry of the Interior here, several months ago, and it’s really unclear what happened, but basically, he seemed to be caught in a sting operation for taking a $2 million bribe. But it’s really unclear; I think he’s under house arrest at the moment. Exactly why this happened, this is one of Medvedev’s ministers so it should have come as a shock to the prime minister here.

But, no, basically the government has an ongoing campaign, and that’s something that Putin talks about very frequently in his press conferences. And there seem to be certain people that get accused and go down, in the government, under charges of corruption, but the problem persists.

SHARMINI PERIES: All right, Jeffrey, I thank you so much for joining us for now, and we look forward to having you back on The Real News. Thank you so much.

Jeffrey Tayler is a contributing editor at The Atlantic and the author of seven books. He has traveled the length and breadth of Russia, both to report for magazines and for his books, three of which concern Russia. He has lived in Moscow since 1993, and outlined his proposal for a new detente between the…