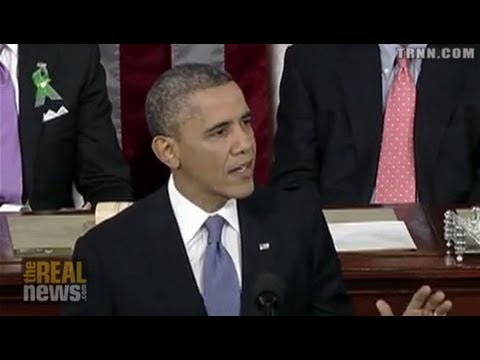 In Washington on Tuesday night, President Obama delivered his State of the Union speech. And the fundamental idea of the speech: it’s time to restore the basic bargain. Here’s what the said.

BARACK OBAMA, U.S. PRESIDENT: [T]ogether, we have cleared away the rubble of crisis, and we can say with renewed confidence that the state of our union is stronger.

But we gather here knowing that there are millions of Americans whose hard work and dedication have not yet been rewarded. Our economy is adding jobsâ€”but too many people still can’t find full-time employment. Corporate profits have skyrocketed to all-time highsâ€”but for more than a decade, wages and incomes have barely budged.

It is our generation’s task, then, to reignite the true engine of Americaâ€™s economic growthâ€”a rising, thriving middle class.

It is our unfinished task to restore the basic bargain that built this countryâ€”the idea that if you work hard and meet your responsibilities, you can get ahead, no matter where you come from, no matter what you look like, or who you love.

It is our unfinished task to make sure that this government works on behalf of the many, and not just the few; that it encourages free enterprise, rewards individual initiative, and opens the doors of opportunity to every child across this great nation.

JAY: Now joining us to give us their take on President Obama’s speech is, first of all, Jennifer Taub. She’s an associate professor of law at Vermont Law School. She researches and writes in the area of corporate governance and financial market regulation.

And joining us from Toronto is Leo Panitch. He’s the Canada research chair in comparative political economy and a distinguished research professor of political science at York University. He coauthored the book The Making of Global Capitalism.

Thank you, both of you, for joining us.

JAY: So, Leo, why don’t you kick us off? What did you make? It’s time to restore the basic bargain.

PANITCH: Yeah. Well, I found it a typical and, for that reason, very disappointing speech, entirely vague in terms of the basic bargain, and misleading in terms of what that applies, but worse, symbolically touching on all the things that need to be done, above all, massive public expenditure on infrastructure, without really providing any of the financial muscle or the direct government employment that would make these things happen, without taking onâ€”and understandably, given the way he praised free enterprise out of the same side of his mouth that he attacked the wealthy and the people who are able to escape taxation by using high-powered accountantsâ€”you know, he didn’t take on any of the interests. Sure, he took a shot at the banks for not allowing people to renew their mortgages at lower interest rates, but indicated he would do nothing to actually force them to do it. This has been on the agenda now since the beginning of the crisis.

So I found it in every sense a typically symbolic speech and really, really very, very disappointing [inaud.]

JAY: Jennifer, what do you think? It seems to have been effective. Some of the people I’ve been talking to are happy that he just mentioned these things. What did you think?

JENNIFER TAUB, ASSOC. PROF., VERMONT LAW SCHOOL: I was also very disappointed, and glad that you zeroed in on that particular phrase he used, which was that we’ve together “cleared away the rubble” of the crisis. That’s simply not true.

And by the president failing to remind us and place in the proper historical context where we are today in terms of this very anemic recovery, he won’t really get the public’s support for what we’ve already heard needs to be done, which is massive infrastructure spending. We have a problem of lack of aggregate demand. It’s not about training people for jobs. It’s not about them lacking skills.

What we have now are massive unemploymentâ€”we’re still at 7.9 percent, and when you include the people who are working part-time, who are discouraged, according to vice chairman of the Fed, Janet Yellen, who spoke just yesterday on this topic, we’re over 14 percent. And she was bold enough, unlike the president tonight, to talk about the real causes of this. And by the way, it’s not just about blaming the banks or blaming regulatory failure, but it actually ties into why the recovery’s been so weak, which is this problem that housing has not been able to lead the recovery. And the fact that the president mentioned housing is picking up, we shouldn’t look to that as an indicator of growth. Robert Schiller [unintel.] speaking about this recently.

So I was discouraged in that, for the reasons we’ve already talked about, but also particularly discouraged by the failure to really look at who’s to blame for this and how we can move forward.

JAY: Now, he didâ€”Leo, he did talk about the need for this infrastructure program. He talked about we need to create employment through rebuilding bridges and rebuilding roads. I mean, why isn’t that what you’re looking for?

PANITCH: Well, it is what one should be looking for. He just isn’tâ€”having stated the objective, isn’t providing the means. And while it’s certainly true that he’s dealing with a ridiculously recalcitrant Republican Party in Congress, it’s also true that American business is fed up with the kind of role they’re playing. And he should be leading a massive campaign to get American business behind, Wall Street behind a massive program of borrowing for infrastructure spending, for direct government infrastructure spending. And, you know, one can borrowâ€”governments can borrow now at virtually zero interest rates. The kind of stuff that he’s proposing is so minimal, if you compared it to anything that the Work Projects Administration did in the New Deal, it’s almost laughable.

But more than that, I think it’s this triangulation problem that he hasâ€”and he shares, by the way, with all of the European social democrats who were enveloped in the middle way, admiring Clintonâ€”he speaks in a way that is at the same time trying to cater to big business and not point, as Jennifer says, to the role that they play in causing the crisisâ€”and even worse, causing the stagnation and the inequality that goes with itâ€”while at the same time throwing out a few symbolic words about things not being fair, but without taking any leadership with regard to getting behind the kind of massive, massive government spending and direct public employment that alone could solve these problems.

JAY: Jennifer, there seems to be two contradictory principles here. One is: restore the basic bargain, whichâ€”in other words, build the foundation of success or future of the American economy on a restored middle class, and don’t add a dime to the deficit. I mean, are these contradictory ideas? And which one does he seem to believe in more?

TAUB: I don’t know what he actually believes in, but what he was expressing were contradictory ideas. And I think that it’s a shame that he didn’t use this opportunity to break down these false narratives. You know, if anyone looks at the equation for calculating GDP, they can see right in it is government spending and government and the private sector complimenting each other. And I think by privileging or putting forward this idea that it’sâ€”you know, that it’s only the private sector that should lead a recovery, he may think he’s just using rhetoric to get people to support his agenda here. But I think it’s a lost opportunity to make people understand how things really operate.

And I agree with Leo: I think government jobs here are important and that he needs to use the word spending. I listened to this speech carefully and then went back and looked at the transcript, and he mentioned jobs over 30 times, and he mentioned spending only on three occasionsâ€”twice was about cutting spending, and the third time was about military spending that would be reduced. And nobody is going to be fooled by this idea that we can cut the deficit, cut spending, and somehow end up in a situation we don’tâ€”that we can move forward and grow the economy. So it’s not going to work if that’s what his plans are.

JAY: Leo, right from the beginning of his presidency, President Obama has been adamant that the solutions are going to be found through the private sector, when during his stimulus plan, which wasâ€”you know, in terms of American history, it was a big stimulus planâ€”not as big as a lot of people thought it should have been, but it was wedded that it had to be done through the private sector. Now, a lot of that money did in fact go to state and city governments because they were desperate and going bankrupt, but all his rhetoric was private sector, private sector.

PANITCH: And he repeated that tonight. He said that in order to have spending on schools and highways and ports, that he would be mobilizing the private sector to invest in these. Now, that’s a recipe for privatizing stuff that is not yet privatized or, at best, for private-public partnerships, which turn out to be far more costly, because what governments then do is underwrite corporate borrowing at higher rates of interest than the governments could borrow themselves.

But this is all about this triangulation with the enormous powerâ€”one has to admit thisâ€”of the capitalist class in the United States.

And, you know, look, I think to some extent one needs to say it’s not just Obama’s failures. What we are seeing here is the increasing impossibility of securing anything like equality, let alone justice, in societies that are driven by private property and the power of capitalist classes. The hope that people have that we could get to a social-democratic type of mixed economy, where capitalist crises would be contained by Keyesian spending and whereby you’d get a gradual set of reforms that would equalize class relations, we are now, into the second decade of the 20th century, clearly seeing that those types of goals are no longer realizable in the framework of contemporary capitalism. And the tragedy of people who start out with those kinds of goals, like Obama or like European social democrats, is they end up reinforcing the current structure of power. And I can only hope that eventually people will come to see that one needs much more fundamental change than Obama or indeed others like him are prepared to mobilize people behind.

JAY: Alright. Thank you both for joining us.

PANITCH: Good to talk to you, Paul.

Leo Panitch is the Canada Research Chair in Comparative Political Economy and a Distinguished Research Professor of Political Science at York University in Toronto. He is the author of many books, the most recent of which are: The Making of Global Gapitalism: the Political Economy of American Empire (Verso 2012); and,In and Out of Crisis: The Financial Meltdown…

How To Fix Baltimore’s Broken System