Why can't North American cars compete; and why should workers bear the brunt from lack of planning?

Why can't North American cars compete; and why should workers bear the brunt from lack of planning? 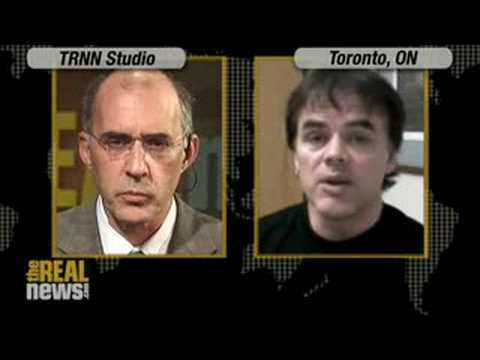 CARLO BASILONE (VOICEOVER): The rising cost of gasoline and the deepening economic crisis has really hurt ordinary people, but the auto industry, once the cornerstone of the US economy, is being brought to its knees, along with the high-paying and secure jobs it once supplied. US auto sales plunged in June to a 15-year low as consumers shunned pickup trucks and large SUVs. City Bank predicted that vehicle sales could drop to 12.8 million, down from 16.3 million last year. In a drastic move, Ford plans to transform three American truck plants to build small cars originally developed for European markets. Over the past three years, Ford has cut its hourly workforce in the US by 40,000 to roughly 54,000. GM has eliminated half of its hourly workforce since 2004, from 106,911 to 55,000 this year. Chrysler, which was bought by Cerberus Capital Management in 2007 and doesn’t expect to make a profit till 2009, announced in June that they would close two plants in St. Louis, cutting 2,400 jobs, while in Canada more than 30,000 auto jobs have been lost since 2001. The Real News senior editor Paul Jay spoke to Jim Stanford, economist with the Canadian Auto Workers Union, about the state of the North American auto industry.

PAUL JAY, SENIOR EDITOR: Jim, talk about the current state of the American and Canadian auto industry. Just how serious is it threatened? And what might we see in the near future?

JIM STANFORD, ECONOMIST, CANADIAN AUTO WORKERS UNION: It’s a North American auto industry now. It’s actually very closely integrated between Canada, the US, and Mexico. It serves its continental market, and the overall North American market is going through some tremendous structural changes at the same time as we’re facing this recession now in the United States, a recession that could spread to Canada as well. So you’ve seen the North American producers, the traditional big three—that’s Ford, General Motors, and Chrysler—they’ve watched their market share in North America erode steadily over the last decade with more imports from Asia especially, also from Europe. Now, in the last year or two, that’s been very much exacerbated by the fuel price surge because of speculative increases in world oil prices and very high gasoline prices. That’s shifted consumer demand away from the larger vehicles which those companies traditionally made. And then, on top of that, now you’ve got a cyclical downturn in sales because of the US housing crisis and the recession and the layoffs and so on. So put all those things together, you’ve got a terrible situation. We’re looking at downsizing the North American industry by, I would say, at least a quarter over the next year or two and a potential bankruptcy at one or more of the North American producers.

JAY: How many jobs might be lost if the worst is to come about?

STANFORD: Well, remember, we’ve already lost tens of thousands of jobs, hundreds of thousands of jobs, actually, in auto over the last three or four years already. It seems like not a week goes by without another one of the auto companies announcing another major restructuring. General Motors announced one this week. They had already announced one just six weeks ago. So restructurings and layoffs and plant closures are coming fast and furious, and we could easily see another 100,000 jobs lost in the major auto manufacturing sector, and then, behind that, several hundred thousand more jobs in the auto parts makers and the other companies which supply the auto industry.

JAY: How serious would this be for the rest of the economy?

STANFORD: Well, the auto industry is a very important industry in the grand scheme of things. You know, the economists estimate that for every job in a major auto facility, there’s about 7.5 jobs in total that depend on that job.

JAY: So a hundred thousand plus could be a million jobs, you’re saying, if—.

STANFORD: It could be close to it when you add up all of the trickle-down impact and all the supply chain, and also the consumer spending industries that depend on the auto industry doing well. So I think it’s a major pillar, still, of the North American industrial economy. The auto industry alone wouldn’t take down the whole North American economy. You know, its relative importance has eroded a bit over time, and there’s a lot of other industries that are also what we call base industries to the overall economy. So I don’t want to exaggerate the importance of it, but certainly in all three countries in North America, the auto sector is a very important source of high-wage working class jobs and a very important source of demand for all kinds of industrially manufactured goods. If the industry—.

STANFORD: Well, the unions in all countries have tried to put protections in place, but they can’t force companies to hire us if the companies aren’t selling vehicles. In fact, labor is only about seven percent of the cost of assembling a vehicle, the final labor in an auto plant. All the rest is on the technology, the capital, the engineering, the parts and materials that are purchased, and so on. So if they’re not selling cars, there’s no way they’re going to keep the workers on the payroll. What we can do as a union is try and negotiate severance packages and other things like that to ease the transition, but that doesn’t solve the problem at the end of the day either.

JAY: But isn’t also part of the problem the reluctance of American and Canadian auto manufacturing companies to adjust to a changing market? This issue of increasing the price of oil is certainly expected. And in terms of climate-change crisis and environmental issues, the issue of more efficient cars was certainly well known. They’ve been more than turtles in dealing with this.

STANFORD: Well, remember, they’re capitalist corporations, and they follow the dollar as their incentive. And for years they made by far their largest profits selling large pickup trucks, SUVs, and other large vehicles. So, you know, the union and environmental groups and others were telling them, listen, we can’t keep producing these things forever; we’ve got to change. But the lure of the big profits they made on those things sort of led them by the nose to continue producing them. Also—.

JAY: Well, the people that are going to suffer the consequences of this are the hundreds of thousands of people losing their jobs. If there’s no framework right now for finding some kind of redress through the companies, what kind of public policy should people be demanding?

STANFORD: I think we need a North American auto pact. We need a policy for the whole continent that would require auto makers to produce as many vehicles in North America as they sell here; that would ensure that each of the three countries in North America gets a fair share of the jobs and investment in this industry, proportional to the size of their market and their population; and that gave support for the industry as it retools and reinvests in smaller cars and in more environmentally-effective vehicles. But if we throw the doors open and accept the rules of globalization, we’ll still be buying lots of cars in North America—that will never change—but we just won’t be making them here anymore. All those jobs and all the incomes that those jobs provide will migrate elsewhere.

JAY: A lot of those cars that are being imported into North American market are not being imported from low-wage countries. A lot of it is cars that are simply more fuel-efficient. So in the next part of our interview, let’s look at the future of the North American auto industry and what’s a rational public policy towards it. Please join us for the second part of our interview with Jim Stanford, economist for the Canadian Auto Workers Union.

Please note that TRNN transcripts are typed from a recording of the program; The Real News Network cannot guarantee their complete accuracy

Jim Stanford is an Economist in the Research Department of the Canadian Auto Workers, Canada’s largest private-sector trade union. He received his Ph.D. in Economics in 1995 from the New School for Social Research in New York. He also holds economics degrees from Cambridge University in the U.K. (1986) and the University of Calgary (1984).…