Jim Stanford: In spite of data showing the Canadian economy is slowing down, the new Federal Budget pushes cuts and a balanced budget which will make recession worse - true under-utilization of labor is 12 percent

Jim Stanford: In spite of data showing the Canadian economy is slowing down, the new Federal Budget pushes cuts and a balanced budget which will make recession worse - true under-utilization of labor is 12 percent 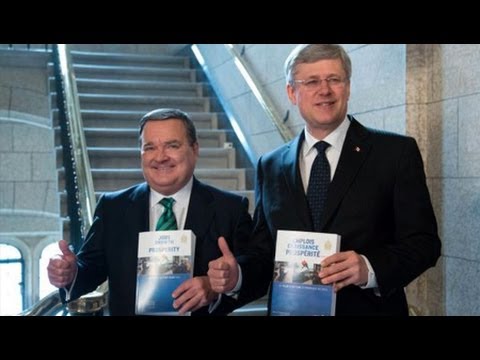 Last week, the Canadian federal government released its budget. Now joining us to parse the budget is Jim Stanford. He’s an economist with the Canadian Auto Workers union. He writes a regular economic column for

Thanks for joining us from–and Jim’s in Toronto, I should say.

JAY: So what are the big beats of the budget, and what do you think of it?

STANFORD: My colleague David MacDonald, he’s an economist with the Canadian Center for Policy Alternatives, our progressive think tank in Canada. He had the best term for it. He called it “austerity on auto pilot”. It’s not like there was any great, dramatic new announcements in the budget, but it still very much carried on the path that had been mapped out in the last year or two by Ottawa, which is substantially reducing government spending, laying off a lot of public sector workers, and generally downsizing the role of government in our economy. And this budget very much carries on with that.

JAY: So it would seem the Harper government is sort of buying into the idea that the recession is more or less over and the demand for commodities, which is such an enormous portion of Canadian GDP now, is going to maintain, perhaps increase. I mean, one, do you think that is their assumption? And then, two, why would they assume that, given the way things are headed in this world?

STANFORD: Yeah. In fact, Canada’s economic performance was very disappointing in 2012 and got worse as the year went on. By the end of the year, Canadian growth had slipped to almost zero, and it’s actually now in the U.S. that you’re seeing more of a sustained rebound, which is a switch. You know, for several years the Canadian government was patting itself on the back, saying, yeah, times are tough, but at least it’s not as bad as it is south of the border. And they’re not going to be able to say that anymore.

They did put a lot of emphasis in resource industries, in particular the export of bitumen from the tar sands in Alberta. But that industry has had a lot of problems in the last year, everything from a lack of pipelines to export the material, to, obviously, big environmental concerns, to a huge downturn in the price that the bitumen receives once it gets to the U.S. market, simply because we’ve flooded that market with too much new supply.

So in that light, the government said, wow, the resource revenues are way down, so we’re going to have to go even deeper with some of our cutbacks. And so their incremental measures would be about $4 billion in additional cutbacks over and above what was already announced in previous years. The end result will be tens of thousands of lost jobs in the federal sector of government and billions of dollars in spending power taken out of the economy at the very moment when it needs it the most.

JAY: So, you know, we’ve talked about this before. What the heck is the logic in this? I mean, Harper’s government did understand, as did many of the other countries that are now into austerity, they did understand their need for some stimulus. If you go back to the G20 meetings in Toronto, there was a clear statement there that a certain amount of stimulus is necessary until there’s recovery, and then they would start all these austerity measures. I think they all picked 2014 or something like that as their target, but clearly the recovery didn’t happen as quickly as they may have thought it had, assuming there even is a real recovery underway, which a lot of people debate. So, you know, who benefits from this? Unemployment’s at what, 7 percent in Canada? That’s not low.

STANFORD: Well, the unemployment rate is just the tip of the iceberg as well. If you count in people who’ve given up looking for work or people who are in involuntary part-time positions, or all the different contract and precarious work, the true under-utilization of labor here is more like 12 percent in Canada.

And it has not felt like a recovery. I mean, technically you could say it was because real GDP was growing, but in terms of, you know, boosting household incomes and just the level of economic security of households, it’s been a terrible, terrible recovery.

I think the government is driven by a number of factors. One of them is political. They are going to be looking at another election in two years’ time, 2015, and the government would very much like to go to that election saying that, you know, we balance the budgets, we are the prudent managers of the economy; you should trust us with another mandate.

In addition, they have some other tax cuts on deck, if you like. A big one they want to bring about is called income splitting, which would allow two adults in a household to share their income and then pay tax on the average of it. This is especially beneficial for a household that has one high earner and then one no earner or low earner, like a kind of a stay-at-home mother type of a situation, with a high wage partner.

So this is a promise that they said they would bring into effect only after they had balanced the budget. So if they are able to balance the budget by 2015, then they think this is when they can really make the immediate promise to do this income-splitting thing, which they think will be politically popular. I hope that it won’t be, ’cause it would be a terrible mistake.

Then, of course, always pushing the government you’ve got businesses and other conservative forces which just want government programs to be downsized anyway, ’cause it gives them more room to maneuver in an economy that’s more dominated by the business sector. So some of the things we have going for us in Canada, like our public health care system, many companies would like to get that rolled back to make more room for for-profit health care. And the same goes for many other areas of government policy. So on any given day of the week, big business would prefer government to be cutting its programs and cutting taxes. If there’s a deficit, then that just gives them an extra argument to advance that cause.

JAY: Now, to what extent is a real estate bubble driving some of the economic growth in Canada? Certainly we know in China there’s an enormous real estate development taking place, bubble. You know, we’ve seen pictures on 60 Minutes of whole enormous empty cities, which they’re building up condos and office buildings that are sitting empty. And who knows when that bursts, ’cause a lot of people are predicting it will. But Canada has its own, does it not? I mean, the real estate prices in Toronto and Vancouver are through the roof. And I assume that means there’s also lots of building activity taking place because of very low interest rates. But what happens, assuming rates go up sooner or later? Then what?

STANFORD: Well, and it actually won’t even take the interest rates to go up. The housing bubble is already starting to collapse. The question is: is it going to be a violent downturn or a so-called soft landing? The Canadian housing industry, for precisely the reasons you mentioned, very low interest rates really expanded in the 2009, 2010, 2011 period. Household debt burdens grew very high. So Canadian debt levels now per capita are higher than they were in the United States before the bubble burst in America with the subprime meltdown. So it is a bit of a vulnerable situation.

The government is watching it. What they’ve tried to do so far is put limits on the availability of mortgages rather than trying to increase interest rates, because the economy’s too weak to handle higher interest rates. What they’re doing instead is making it harder to get a mortgage, toughening the conditions you have to meet in order to be granted a mortgage, and hoping that that will gradually cool off the housing sector. Last year, the housing sector was still adding to growth. This year it probably won’t. Now it looks like it at best will be breaking even, or maybe taking away from growth.

JAY: Now, you work with the Canadian Auto Workers. And I think it was your last convention, wasn’t it, the governor of the Bank of Canada spoke at your convention, which I think was a bit unprecedented, and sort of criticized Canadian corporations, ’cause they’re sitting on mountains of cash the same way American corporations are, and not investing it in the economy. I suppose you must have mentioned to him, if he doesn’t already know–I assume he does–I mean, I guess one of the reasons they don’t want to invest it in the economy is because wages are so stagnant. There’s not enough demand. So why would you invest? So, I mean, has anything changed on that score?

STANFORD: Yes. That was Mark Carney, the governor, and he called it dead money. That’s what grabbed the headlines, when he criticized countries for sitting on top of dead money and argued that we really need companies to be investing more in capital equipment and new projects and new job-creation schemes.

How we get those companies to invest is a complicated question. The tax cuts sure haven’t helped. And if we can’t get companies to invest, then we should find other ways to invest in the economy, ’cause we need investment. Think about public sector investments in transit, infrastructure, environmental protection, low-cost housing. Those are investments that also create jobs and add to our standard of living. And we shouldn’t be dissuaded by some kind of phony phobia about debt from making those investments, especially if corporations aren’t investing as they should be.

JAY: Well, if they want to deal with the debt, they could go back and tax the corporations who are sitting on all that cash and then use that.

STANFORD: Well, that would be part of it. The corporate tax cuts that had been implemented in Canada, both federally and provincially, have been quite expensive, and I think they’ve reduced combined federal-provincial revenues here by about $8 billion a year since 2000. Now, that doesn’t single-handedly solve the deficit problem, but it certainly takes a big chunk out of it.

STANFORD: Thank you very much, Paul.

Jim Stanford is an Economist in the Research Department of the Canadian Auto Workers, Canada’s largest private-sector trade union. He received his Ph.D. in Economics in 1995 from the New School for Social Research in New York. He also holds economics degrees from Cambridge University in the U.K. (1986) and the University of Calgary (1984).…

January 28, 2020
Sign Up for Our Newsletter
Help Us Make Real News!