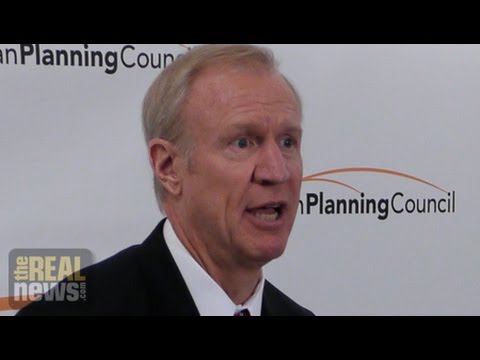 On Monday, Illinois Governor Bruce Rauner, a Republican, struck a major blow to organized labor in his state by announcing an executive order that prevents unions from collecting dues from workers who aren’t union members but are represented by them and, for example, benefit from their collective bargaining agreements.

This is Governor Rauner announcing his decision.

BRUCE RAUNER, GOVERNOR OF ILLINOIS: This morning I signed an executive order that ends unfair share fees for those employees who wish not to fund government unions with which they may disagree.

NOOR: About 6,500 workers will be affected. Labor leaders have said they will challenge the measure in court, and the democratically controlled state legislator could also overturn it.

The move is part of a larger trend. Republican governors in nearby states, like Michigan, Indiana, Wisconsin, and Ohio, have all adopted similar right-to-work measures in recent years.

Well, now joining us to discuss this is Jan Rodolfo. She’s a registered nurse and a Midwest director for National Nurses United. She’s joining us from Chicago.

And thank you so much for joining us.

JAN RODOLFO, MIDWEST DIRECTOR, NATIONAL NURSES UNITED: Thanks for having me.

NOOR: So Rauner really came into office on this pro-business anti-union platform. He says these type of payments violate the First Amendment. Obviously, units will be affected. Can you start off by telling us what the impacts will be, especially in the health care field, where you work?

RODOLFO: Sure. So, as nurses, we see this, as you said, as part of a broader trend to weaken unions in general. And so we don’t see it just as impacting the 6,500 workers that are directly represented, but being much broader than that and having real public health effects. From our perspective what it means is unions exist to advocate for workers and nurses and first-responders and EMTs and police, etc., right, so that public servants can actually advocate for the community in turn for the people that they serve. And so, when unions are weakened and you don’t have a strong union representing you as a public servant, then it’s much more difficult to be a true advocate and to make sure that public safety is maintained.

NOOR: And so it’s not just health care that’s going to be affected. Talk about also some of the broader implications, because unions have said that this is part of Rauner’s agenda to weaken unions. And he hasn’t been shy in publicly attacking unions, faulting them for these somewhat stagnant economy that Illinois is facing.

RODOLFO: Sure. No question. That’s absolutely where he wants to lay the blame. He wants the public, he wants you and I to believe that public-sector workers are what caused all kinds of budget crises in different states, and including Illinois.

But we know that it was actually Wall Street excesses that created the economic crisis. There’s no question about that. It wasn’t workers, everyday workers, or nurses, or doctors, like you and me, who created the crisis. And yet Rauner’s asking us to pay the price. And I think he sees an opportunity from this economic crisis to weaken unions and to strengthen the position of his corporate buddies.

NOOR: And who exactly is Bruce Rauner, for our audience who might not be familiar? And you mentioned Wall Street. Talk more about the interest that he really represents in Illinois.

RODOLFO: Sure. So Bruce Rauner is a billionaire. And he acts like a billionaire. He bought his way into office. And he clearly wants there to be just unbridled free market access. So he doesn’t believe that regulations benefit anybody. He thinks that anything that benefits business should be permitted. And so it’s no surprise when you look at right-to-work states, just for example, have 51 percent higher workplace mortality than states that are not right-to-work. That’s because of workers compensation regulation, right, and OSHA regulation, which Bruce Rauner’s opposed to. So he really sees he wants to eliminate protections that currently the public in Illinois enjoys and that workers in Illinois enjoy because he wants businesses to be able to basically make decisions completely independent of what impact they have on workers and the community.

NOOR: And what are the next moves going to be for organized labor in Illinois? As I mentioned in the introduction, we understand organized labor is planning a legal challenge. The state does have powerful union allies in the state house, in the state senate. Are they planning some type of challenge to overturn the executive order?

RODOLFO: I can’t speak to the legislative strategy, or even to legal challenges. What I do know is that union workers around Illinois, including nurses, are going to be standing up and mobilizing to put pressure on this governor. We think this governor only made this move as an executive order because it wasn’t something that he could do legally, that he could actually do for the legislative process. There isn’t support in Illinois for this measure. We think that he’s overreaching. And we think that mobilizing people in their communities and in Springfield is the way to demonstrate to this governor that he needs to step back and start to represent his constituents.

NOOR: Alright. Well, we’ll keep certainly keep following this story. Thank you so much for joining us.