The Secretary of State stopped short of linking climate change to human activity, when he signed the Fairbanks Document this week in Alaska. But Janet Redmond of Oil Change International says the Trump Administration is still denying the urgency of the warming planet

The Secretary of State stopped short of linking climate change to human activity, when he signed the Fairbanks Document this week in Alaska. But Janet Redmond of Oil Change International says the Trump Administration is still denying the urgency of the warming planet 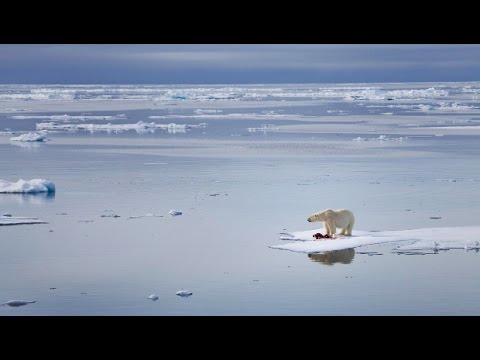 KIM BROWN: Welcome to the Real News Network in Baltimore, I’m Kim Brown. Donald Trump made it pretty clear that he would withdraw from the Paris agreement during his campaign before the election calling climate change, “A hoax” perpetrated by China.

KIM BROWN: After the cancellation of the a White House meeting with senior advisors to discuss the matter, White House Press Secretary, Sean Spicer said that the President will not be making an announcement formally regarding the Paris agreement until after he returns from the G7 meeting in Italy at the end of May.

Meanwhile, US Secretary of State Rex Tillerson hosted foreign ministers from Arctic nations at a summit in Alaska on Thursday handing over control, the rotating leadership that is, of the Arctic Council this time to Finland. It is the governing body, the Arctic Council that is, of the region which is experiencing warming twice as fast than any other part of the world. Donald Trump’s reluctance to fight climate change was said to have cast a shadow over the talks, so let’s take a look at a clip of Secretary of State, Rex Tillerson at the meeting in Alaska.

REX TILLERSON: In the United States we’re currently reviewing several important policing including how the Trump administration will approach the issue of climate change. We’re appreciative that each of you has an important point of view and you should know that we’re taking the time to understand your concerns. We’re not going to rush to make a decision; we’re going to work to make the right decision for the United States.

KIM BROWN: And with us to discuss the Paris agreement and what it will mean if the US pulls out of the cord, we’re joined in Janet Redman. Janet works at Oil Change, USA. She’s also the Policy Director at Oil Change, International. Previously, Janet was the Director the Climate Policy Program at the Institute for Policy Studies and Co-Director of the Sustainable Energy and Economy Network. She’s also a founding participant in the Global Climate Justice Now Network. Janet joins us today from DC. Janet, thank you for coming back to the Real News.

JANET REDMAN: Thank you to have me on.

KIM BROWN: We have Secretary of State, Rex Tillerson, former CEO of Exxon in the Arctic acknowledging climate change in a region where it is being felt most acutely and Donald Trump postponing his announcement as to whether or not he is going to pull out of the Paris agreement that will limit global temperature rise below 1.5 or 2 degree Celsius. Tillerson has gone on the record saying that the US should stay in the accord, so what are your thoughts about all of this Janet?

JANET REDMAN: Well, I think we’re seeing real disconnect inside the Trump administration which is not surprising. Their climate plan, their energy plan, of course, was very undeveloped coming into this presidency and this administration. Of course, Trump did run on a platform of leaving the Paris agreement, but the controversy inside the Trump administration, really, between the two factions of ‘staying in gives us a handle inside’ the negotiations and pulling out sends a signal to our supporters that we’re serious about expending the fossil fuel industry.

What we saw Rex Tillerson do today at the Arctic Circle meeting was actually I thought pretty interesting the statement that comes out of that meeting acknowledges that climate is a serious threat to the Arctic region both the environment and the communities that exist in the Arctic Circle. That, to me, is a pretty important. I think what we’re also seeing though is a walking back of the US and making a fight about including climate change in international statements. We saw in the Energy Minster’s meeting a few weeks ago that the US really was scuffled with other countries to take recognition of climate change out of those documents. There was a lot of pushback because just about every other country on the globe recognizes that climate is an issue even if there are at different phases of moving to take action against climate change.

The pushback against having the meeting the second time, the meeting was canceled inside the White House senior council really, I think, tells us that the administration has not yet settled on a plan as to how they’re going to treat the Paris agreement, and I think we all need to really weigh the benefits and the downsides of the US pulled out. I mean, the US should, certainly, stay in the Paris agreement. It’s the one international space but we have made commitments about reducing the impacts of climate change and curbing global warming. I think with the US staying in; with the Trump administration in place right now we have to be really concerned also about what the US would be attempting to do at that negotiating table.

KIM BROWN: Janet, you mentioned that there were some splits in the White House behind this issue. It said that there’s Tillerson, Ivanka Trump and Rick Perry, now head of the Department of Energy, on the one side saying that the US should stay in the Paris agreement. Steve Bannon and Scott Pruitt; we know who Scott Pruitt is, head of the EPA, on the other side saying that the US should pull out, and speculation that Rick Perry even is trying to push the President to say that we should renegotiate the terms of the Paris agreement so that the US can stay in but continue to emit greenhouse gases. Is there any value to staying in the accord if America is just going to keep on racketing up global greenhouse gas emissions?

JANET REDMAN: I think first of all we should be really aware that whether it sends two sides of this issue of the controversy within the White House as it relates to the Paris accord. We should be really careful to make sure we’re not seeing one side as a good side and one side as the bad guys. I think across the board everyone that you’ve mentioned in the Trump administration has really shown themselves as an enemy to climate action whether it’s Pruitt who has specifically said let’s dismantle climate protection or Bannon who clearly has no interest in climate protections.

Even Tillerson himself has sworn under oath that fossil fuel companies don’t subsidies when, in fact, that’s been the case for almost a century. The Department of Energy had … Scott Perry has said very clearly that he wants to take apart the Department of Energy, so … I think the benefit of the US staying in the Paris accord and staying at the negotiating table is that we’re still in conversation with other countries.

That’s important because this is not the only table that we sit at at the international level, so I think there are ways for other countries to hold our feet to the fire in the Paris accord, at the UN framework convention on climate change table as long as we are still there. Absolutely certainly we’re hearing rumors and we’re seeing articles that say that Perry wants to stay in that space so that the US can renegotiate our position there. There’s been talk of trying to bring in language to encourage technologies like curving, capture and secrustations that will give coal a new life, for example.

KIM BROWN: Janet, I understand that a big part of these White House meetings are around the debate as to whether or not the Paris agreement allows for the US to not fulfill its submissions to cut greenhouse gases through the Clean Power Plan. What are you hearing and what are your thoughts about that?

JANET REDMAN: Well, one of the ways that the global community enabled the United States to get onboard with the Paris agreement was to make sure that we don’t actually have international binding targets. What every country has there are domestically binding targets. We all said we will fulfill commitments that we make domestically. We’ll put those in a chart at the end of this Paris accord and we will agree to hit our own targets.

The Clean Power Plan itself as one of the tools by which we were going to make those emissions cuts was established actually before we entered into the Paris agreement and so the controversy is about whether or not we have to do it through the Clean Power Plan. I think there will be ongoing conversation about how that works. Certainly, there are other tools we could use. The Clean Power Plan is one of many tools but it certainly was the lynchpin, the keystone in Obama’s climate plan. I think that conversation will be ongoing as we move through this administration and we see litigation domestically in terms of our own regulations, our rule-making domestically.

KIM BROWN: We’ve been speaking with Janet Redman with Oil Change, US and the Policy Director at Oil Change, International. We’re talking about basically trying to figure whether or not the Trump administration will pull out of the Paris Climate Agreement. We had a visit from Rex Tillerson, he’s not visiting but he was up in Fairbanks, Alaska. He signed what they call the Fairbank’s document along with other Arctic nations that is not binding but gives a slight acknowledgement that climate change is happening and that is indeed a dangerous thing for the globe. Stick around for part two of our conversation right here on the Real News.

How did we do?

If you rate this transcript 3 or below, this agent will not work on your future orders

March 1, 2019
Sign Up for Our Newsletter
Help Us Make Real News!