Janet Redman, Director of the Climate Policy Program at the Institute for Policy Studies, says emission targets proposed by the Obama administration are insufficient to avoid the worst consequences of climate change

Janet Redman, Director of the Climate Policy Program at the Institute for Policy Studies, says emission targets proposed by the Obama administration are insufficient to avoid the worst consequences of climate change 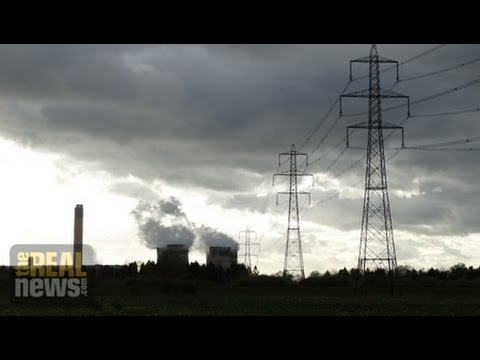 On Tuesday the United States submitted its target to cut greenhouse gas emissions to the United Nations framework convention on climate change. The submission, referred to as the nationally determined contribution, hopes to reduce our emissions by 26-28% below 2005 levels by 2025, and to make best effort to reduce it by 28%. This is the same announcement and levels that President Obama announced in Beijing last November. China and the U.S. are the worst-emitting countries in the world.

In response to this announcement, our next guest Janet Redman says to do our fair share the U.S. should cut carbon pollution by two to three times as much, and put a number on the table for 2020 when the climate agreement kicks in.

Now joining us from Washington is Janet Redman. Janet is the director of Climate Policy Program at the Institute for Policy Studies in Washington, D.C. She provides analysis on international financial institutions, energy investment, and carbon finance activities. Janet, welcome back to the Real News Network.

JANET REDMAN, DIR. OF CLIMATE POLICY PROGRAM, IPS: Thank you so much for having me.

PERIES: So Janet, let’s begin with the reduction levels submitted by the U.S. You think that this is not adequate. You say that this should be two or three times higher. Why are you saying that, and is that really possible?

REDMAN: Well, the science tells us, climate scientists have been saying for a while, that developed countries need to be cutting their emissions between 25-50% from 1990 levels by the year 2025. If you look at the U.S.’s baseline year, they’ve used the year 2005. Our emissions were much higher in 2005 than they were in 1990. So basically what this promise of up to between 26-28% cut in emissions actually equals a 14-16% cut in emissions using the baseline year that everyone else is using.

So basically what the U.S. has done is said something like we’re going to start going on a diet, but we’re going to use Thanksgiving as our baseline year, and we’ll eat half as many pies on an average day than we did on Thanksgiving. So they’re kind of fudging the numbers a little bit.

But the more important part is that the U.S., as one of the, as the biggest historical emitter on the planet, has a fair share of the burden that it needs to carry of at least some say 55-65% cuts by 2025. So either way, whether you’re looking at what developed countries should do overall, or you’re looking at what the United States’ fair share of cutting global greenhouse gas emissions, its own greenhouse gas emissions would be, it’s falling way, way short.

Your second question, about what’s possible, I guess –

PERIES: Yes, I, that’s the obvious thing. Like, if you think this is not enough, is anything more than what they have tabled possible?

REDMAN: Again I think it’s … that’s the challenge that we have to look at most closely. So in their table they laid out a little bit of what the policies are that they’re depending on in order to cut emissions. They’ve named a bunch of things. Renewable portfolio standards, fuel standards for light vehicles and heavy vehicles. And federal, activities on federal land, so cutting, bringing more renewable energy onto federal lands.

But they haven’t talked about the biggest piece of their puzzle. They mentioned the Green Power Plan, which is the EPA’s new guidelines on how states will cut emissions from existing power plants. That’s the gem of climate regulation, at this point. And they name that in their intended nationally determined contribution.

That’s a piece where I think the U.S. can do a whole lot more. What they’ve done by that piece of regulation is give every state a target for cutting its greenhouse gas intensity. That means it needs to be less carbon emitting for every kilowatt hour, say, of power that they produce.

That’s instead of a hard cap. That’s instead of saying you only have this much pollution you can create, you need to stay below that. So there’s already a place where we’re seeing a little bit of weakness in that Clean Power Policy.

The next thing they could do better is to actually set a regime that gets us to renewable energy faster. One of the pieces that concerns me the greatest in the Clean Power Plan is that it basically says we just need to lower our emissions from the fossil fuel sector. That could mean moving from coal to natural gas, because natural gas is a lower-emitting fuel at the point of combustion. It’s actually not less emitting if you look at the entire chain of creating natural gas. It emits lots of methane in the production of natural gas.

PERIES: Now with the United States, in terms of its ability to respond to climate change, is obviously much greater in terms of innovation and ability to sort of kickstart some industries. Is there an example out there that the environmental community looks at as an example that the U.S. can follow?

REDMAN: Yeah. There — one of the examples that we talk about amongst ourselves very often is the renewable energy policies of Germany. Another developed country, a country that’s not in a latitude like Florida, but a country that’s moving quickly to generating an immense amount of solar energy. And what’s really interesting about how they do this is that 60% of their renewable energy comes from individual rooftops, from solar panels on people’s houses. What that means is they’ve actually distributed energy generation, made it more democratic, and made people the producers of the energy they consume.

And they’ve done this through an interesting policy called a feed-in tariff, which makes a price support. It means there’s a guaranteed price for every kilowatt that is produced and sold back to the grid. This can be a little bit problematic, because it means that those of us who can afford to put solar panels on our rooftop in the first place benefit from this policy. But there’s some experiments helping, like in the Philippines, to have what they call a socialized feed-in tariff, where you actually balance out and redistribute the costs of being able to generate solar, for example, on your own rooftop.

So that’s one of the policies that we’ve been looking at and thinking about how we can move it past just a state-by-state implementation, but make it something that’s more comprehensive in the U.S.

PERIES: Right. And Janet, finally, one thing that you noted about the U.S. climate submission is that there was really little commitment to financing support for developing countries, since they’re less responsible for the situation we’re in. There’s an expectation on the part of developed economies to put more money into the pot so that the developing countries can also begin to address and reduce their emissions. Your take on that?

REDMAN: That’s right. It’s important to note that there was a decision made that finance did not have to be a central piece of any country’s INDCs. But that being said, developing countries have been very clear, and civil society has been very clear — the development community, the environmental community, the environmental justice community — has been very clear that actually, it should be a part of what developed countries are contributing, are bringing to the talks in Paris, and the UN talks in Paris at the end of this year.

That’s because we actually can’t expect many developing countries to move to low-carbon pathways. Not even, we’re not even talking about adaptation. We certainly should be supporting countries adapt to climate change that they weren’t a part of even creating, majority of low-income countries.

But even for every country to take action on climate change, to mitigate greenhouse gas and climate pollution, there are countries that need financial support to do so. And to be honest, it’s our moral responsibility, it’s our legal responsibility under the climate convention, that we will supply that kind of finance and technology transfer to enable developing countries to make the cuts in greenhouse gas emissions, to move to clean energy economies, in order for all of us to take action, everyone across the planet to take action on climate change.

But the key is finance from countries, especially like the United States, who have the resources.

PERIES: Janet, as always, thank you so much for joining us today.

REDMAN: Thank you so much for having me on.