The U.S. president's argument about the undermining of international sovereignty is real, but victims of attacks would otherwise have almost no other recourse in the face of state-sponsored terrorism, says international law professor John Quigley

The U.S. president's argument about the undermining of international sovereignty is real, but victims of attacks would otherwise have almost no other recourse in the face of state-sponsored terrorism, says international law professor John Quigley 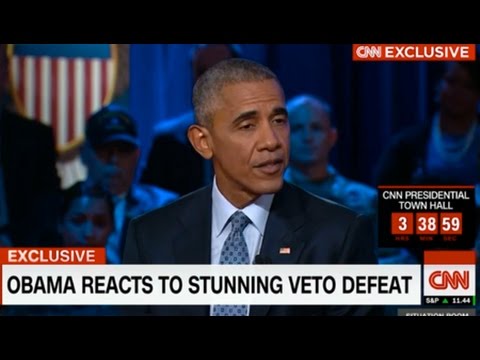 GREG WILPERT: Welcome to The Real News Network. I’m Gregory Wilpert and I’m coming to you from Quito, Ecuador.

Both the US house of Representatives and the US Senate overwhelmingly voted to override President Obama’s veto of the Justice Against Sponsors of Terrorism Act on Wednesday. This was the first time Congress overrode a veto by President Obama. The act, which is also known by its acronym, JASTA, allows US citizens to sue foreign governments for their involvement in terrorist acts on US soil. The bill’s main beneficiaries are intended to be the families of victims of the 9/11 terror attacks. And the main target is generally considered to be the government of Saudi Arabia. In a town hall style discussion on CNN, President Obama explained why he was opposed to the bill.

PRESIDENT BARACK OBAMA: The problem with that is that if we eliminate this notion of sovereign immunity then our men and women in uniform around the world could potentially start seeing ourselves subject to reciprocal laws. And the concern that I’ve had has nothing to do with Saudi Arabia per se, or my sympathy for 9/11 families, it has to do with me not wanting a situation in which we are exposed to liabilities for all of the of the work we are doing around the world.

WILPERT: Shortly after the veto was over-ridden, a number of Republicans expressed regret for having supported the bill, saying that they were not clear about what it implied and now the congressional leadership has signaled a willingness to revise the bill.

Joining us, to take a closer look at Obama’s argument against the bill and what it implies, is

John Quigley. He is Professor emeritus of international law at Ohio State University and has written extensively about both the Middle East and Russia. His books include The Ruses for War: American Interventionism Since World War II. Thanks for being on The Real News, John.

WILPERT: As we saw I the excerpt from Obama’s town hall, his main argument for opposing JASTA is that he says it eliminates the principle of [sovereign immunity]. Explain to us briefly what that principle is about.

QUIGLEY: Well sovereign immunity is a principle that has existed in the law for centuries that says that a state cannot be sued in the domestic courts of another state. For example, Canada can’t be sued in court in Massachusetts. That’s a principle that states have adhered to for a very long time on the theory that anything involving a state should be handled at the diplomatic level. That principle has been eroded to some extent in the 20th century and into the 21st century. First by the virtue of fact that some states began to engage in commercial activity through state owned companies and it was thought that they shouldn’t be immune from sued for failing to sell a product properly or failing to pay for a product.

So there was an erosion of the principle to that extent. Also for what are considered [de]torts. That is what you might call product liability suits where a state that is engaging in a commercial activity that involves selling some product, sells a defective product. So you had those exceptions coming in. Then in the late [20th century] the United States added a different exception. The ones that I’ve been mentioning, the ones relating to commercial activity and detorts were accepted generally around the world. But then the United States added a new one for what it called state sponsors of terrorism. That is that certain states could be sued for acts involving terrorism.

The State Department then began to put out a list of states and there are currently 3 states on there, Syria, Sudan, and Iran can be sued in the United States for acts of terrorism committed anywhere in the world. The new legislation that was just adopted over President Obama’s veto is a further expansion and it will allow sued against any state if that state promotes a terrorist act that occurs in the territory of the United States.

So that’s the significance of the new piece of legislation and the impetus to it was that some victims of the 9/11 attacks have been trying to sue the government of Saudi Arabia so that’s likely to be the most immediate impact of it but the legislation is more inclusive than that. The legislation does not name Saudi Arabia. It says that a suit can be maintained against any foreign state that promotes a terrorist act that is carried out within the United States.

WILPERT: So it sounds like this law the JASTA act would significantly erode indeed the principle of sovereign immunity. Would you say that’s true and if so do you think that’s a problem for international law more generally?

QUIGLEY: Well it is a significant erosion and it does open up the possibility that other governments will follow a similar path and allow more suits against foreign states including the United States. In a way you could say well that’s good, states do bad things, they should be sued. There are problems with that however. One can’t really count on courts to be impartial when they’re dealing with the act of a foreign government. Political considerations come to play and so a state that is generally disfavored may not do so well whereas the state that is an ally might do better. So that would be one problem.

WILPERT: I guess one could say that the concern that Obama mentioned about the US being sued could be an indicator that the US is actually potentially guilty of something. What do you make of that argument that for example the US has carried out a number of drone attacks that have killed civilians and that could try to sue the US in return? Wouldn’t that be something positive and if not, what would be the alternative course of action for somebody who’s a victim, I mean?

QUIGLEY: Yes, I think that is what President Obama is probably immediately concerned about, that the United States carries out actions of that sort, drone attacks or missile attacks and that there are victims of those attacks and this would open the way to suit in a foreign state. There was this one incident not too long ago where the United States, it was in Syria, carried out a missile attack to try to free a couple of hostages and wound up killing two of them. One of them was an Italian and the United States paid something like a million dollars to his family as a compensation payment and made clear in the documentation that it sent that it was not opening itself up to suit in the courts of Italy.

There was concern that the United States could’ve been sued over that. But your point is that this may be a good thing to allow suits against states that engage in that kind of activity and that may well be because there aren’t very many avenues of redress for someone who is harmed by a government. Unless the state of nationality of that person takes it up and makes diplomatic case out of it, that person is not likely to have any direct form of redress.

So that’s a potential source but there are limitations. The international criminal court as you say is another possibility but that requires characterizing the activity as a crime committed by a particular person. So the action would be against a particular person and it would be possible to get damages but it would be damage toward against that individual person, not against a foreign government.

WILPERT: Yea sounds like it would be somewhat limited especially if you consider that the US has so far refused to participate in large extent in both of those courts right?

QUIGLEY: Yes, I think realistically neither one of those courts is going to be a practical source of remedy in most situations.

WILPERT: Okay. Well we’ve reached the end of our time but thanks so much John for agreeing to this interview. Thanks for joining us.