Vijay Prashad: Turkey can't live up to its tough rhetoric on Syria as it faces Kurdish resistance and morale crisis in army after 300 officers convicted of treason

Vijay Prashad: Turkey can't live up to its tough rhetoric on Syria as it faces Kurdish resistance and morale crisis in army after 300 officers convicted of treason 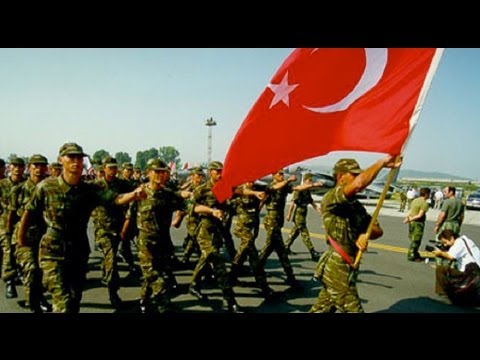 Apparently, Syria has apologized to Turkey for shelling a Turkish town. Turkey had responded by shelling into Syria.

Now joining us to talk about all of this and the significance of these events is Vijay Prashad. He’s a professor of international studies at Trinity College. He’s the author of The Darker Nations: A People’s History of the Third World and, more recently, Arab Spring, Libyan Winter. Thanks very much for joining us, Vijay.

JAY: So what happened, and what is the significance of it?

PRASHAD: Well, this was not such an unusual event. In other words, there has been a great deal of tension between Syria and Turkey for a long while, for maybe about ten months.

The Free Syrian Army was based in southern Turkey. There have been previous engagements between Syrian government forces and Turkish military forces. On June 22, for instance, an F-4 jet was shot down as it was leaving Syrian airspace. It was a Turkish jet, shot down most probably by Syrian government forces. So there have been clashes between Syria and Turkeyâ€”you know, the conflict has not been, as it were, simply rhetorical.

But on October 3, there was a shelling, a mortar shelling of a town in southern Turkey which killed five civilians, five members of the same family, wounded eight other people. Now, this was a very different kind of occurrence, because now civilians have been killed inside Turkey. So the Turkish parliament went into session. It renewed Turkey’s right to, as it were, do crossborder attacks. This is a parliamentary provision that the Turks had given to their military in order to fight the Kurdish movement, the PKK, which had bases in Iraq and in some parts of northern Syria. So they quickly or hastily renewed this, you know, parliamentary privilege to go across the border and fight, there was talk of retaliation, and then finally, yes, the Turkish military used its artillery to shell into Syria.

Well, what happened was there were two sorts of pressures, one of course the internal pressure in Turkey, where there is a significant pro-war segment which wants to, you know, as it were, extend Turkey’s forward position into Syria. So the government had to deal with that pressure. Secondly, from the European partners there was a lot of pressure for Turkey not to act. So Angela Merkel of Germany made a statement asking Turkey not to retaliate, and NATO went into its huddle.

And the NATO response is interesting. Under its charter, it has the ability to write a, as it were, ArticleÂ 4 or ArticleÂ 5 response. ArticleÂ 5 means that it gives its member states the right to respond militarily. But NATO, in its huddle in Brussels, came out with an ArticleÂ 4 response, which is a call for consultation, which meant that there was no stomach in NATO headquarters to come in on the side of Turkey if Turkey decided to escalate against Syria.

But this is a long problem for Turkey. Turkey had initiallyâ€”in the early part of the militarization of the Syrian struggle, Turkey had taken a very advanced position, calling for the ouster of President Bashar al-Assad of Syria, calling for support to the Free Syrian Army, and indeed giving the Free Syrian Army the right to base itself in southern Turkey, southeastern Turkey.

But over the course of the last several months, there has been a problem for Turkey. The uprising of the Kurds, the kind of longstanding Kurdish problem, has restarted, and this year, in the border region towards Iraq and Iran, the PKK, the Kurdish workers party, has once more engaged the Turkish military. And so there has been pressure on the border from the side of Iraqi Kurdistan.

On the other hand, Assad in Syria did something quite smart over the summer. He basically gave the Kurdish regions of Syria a considerable amount of autonomy. And it is the case now that inside Syrian Kurdistan there is perhaps a regrouping of militant factions to go and struggle in Turkey.

Turkey has therefore tried to extricate itself from a direct military engagement inside Syria. It last month asked the Free Syrian Army to leave Turkish territory, and now the Free Syrian Army is somewhere situated, perhaps, near Idlib. And at the same time, Turkey has wanted NATO to come in and, as it were, you know, take over from Turkey in its forward role. But NATO has been very reticent.

So the question of, you know, this mortar shelling has been the following: would Turkey or would Ankara act precipitously against Syria, you know, and to try therefore to bring NATO along? But the evidence demonstrates that the West is not willing to have any kind of military intervention into Syria at this time, which means that Turkey has very few options on its plate. There was that retaliatory shelling, you know, that’s almost like a symbolic shelling, and then the Syrian government apologized for the initial mortar attack. And that is where things lie right now.

It appears that Turkey will not escalate. Deputy prime minister’s aides have been saying in Ankara that there is no appetite for Turkey to escalate further. So this is where we are now.

It’s still a very tense situation. Turkey continues to be boxed in on the one side by its advanced political position regarding Syria, and by the fact that it doesn’t have the means to actually enter an armed conflict against the Syrians, given its own problems with the Kurdish resistance on the one side, and secondly, with the conviction of 324 seniorâ€”.

JAY: Well, yeah, I was about to ask you about that, Vijay. What isâ€”this is the other crisis going on in Turkey at the moment, the conviction of, what, 300 military and former military officers, some ofâ€”many of whom are going to be jailed. What is that all about?

PRASHAD: In 2003 there was a suspected military coup led by very senior officials of the Turkish military, including the head of the Navy, the head of the Army, and the general who had facilitated the capture and transport of the head of the PKK, the Kurdish workers party, Abdullah Ã–calan, from Kenya to Turkey. So these senior figures were arrested in 2003, suspected of attempting a coup against the government of Tayyip ErdoÄŸan, the head of the Justice and Development Party, the AKP. That was what they had been arrested for. Well, just ten days ago, they were convicted, these 324 military people, many of them very senior.

But from what I hear in Turkey, the current leadership of the military is very pro-Erdogan, pro the AKP. Nonetheless, it cannot but be the case that there is a question of morale inside the military, given that such senior officials have been convicted of attempting a coup d’etat.

So the Turkish military position, on the one side between the Kurdish resistance and on the other side with this conviction of such senior leaders of the military, the Turks are not in a position, it seems, at this time to actually make anything of their advanced policy versus Syria, which should actuallyâ€”if they were serious about their own rhetoric about Syria, they should have already opened up a humanitarian corridor, etc. But because there is these internal problems in Turkey, it is likely that the Turks have overshot, in a way, their abilities at this time.

Is the Turkish-Russian S-400 Missile Deal Sabre Rattling Among Superpowers?