Paul Jay speaks with John A. Powell at the Tides Foundations' Momentum conference in San Francisco about Democrats' role in resolving current crisis.

Paul Jay speaks with John A. Powell at the Tides Foundations' Momentum conference in San Francisco about Democrats' role in resolving current crisis. 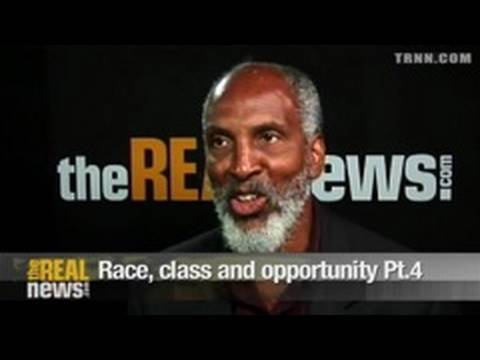 PAUL JAY: PAUL JAY, SENIOR EDITOR, TRNN: Welcome back to The Real News Network. We’re in San Francisco at the Momentum Conference of Tides Foundation with john powell. He’s the executive director of the Kirwan Institute for the Study of Race and Ethnicity. Thanks for joining us again, john.

JOHN A. POWELL, EXECUTIVE DIRECTOR, KIRWAN INSTITUTE: Thanks for having me, Paul.

JAY: Van Jones was hounded out of office by a right-wing talk show host, Glenn Beck, who maybe does 1.5 million viewers on a good night, maybe occasionally reaches 2 million, and in a country of 300 million people, it’s not that many people. This guy is able to start a campaign that gets to decide who’s in the White House, and he’s able to, you know, harness up or summon up all kinds of demons from the Cold War, from race-based politics, even going after 9/11 issues, and the White House doesn’t defend him. What do you make of this?

POWELL: Well, you know, my first thought, frankly, was—you know, and I know Van Jones. He’s a friend of mine. But it took me back to ["LIE-nih-gruh-NEER"], who’s also a friend of mine. And I think, you know, I’ve been somewhat disappointed in Democrats willing to sort of stand up. I used to say, you know, at times the Republicans play hardball, we play wiffleball. You know. Stand up for principles. I mean, there are exceptions—Paul Wellstone, when people say this is right and I’m going to do it, I’m not just going to count, you know, sort of the short-term tactical thing. And I think when that happens you see not only a new leadership emerge; you see America behave in different ways. So I’m hoping that that will happen. I was extremely disappointed. But I was also not just disappointed in the White House, but disappointed in the progressive movement. I mean, Beck said himself, after he started criticizing Van Jones, it must be true—no one stepped up to defend him. What’s that about? And part of it, again, is, I think, our inability. We conceded the discourse, especially the discourse in this country on race. We saw it in the Supreme Court nominations. We conceded to the right wing. And our response is, well, let’s be quiet and it’ll blow over. That’s not a response at all. That’s not a smart response, I should say.

JAY: There seems to be a real disconnect between the leadership of the Democratic Party, not just the administration, and, I think, the population. They’re so fixated with the hard right and the amplification of the hard right in the media, and of course in the Senate with the Republicans. And they seem very afraid of kind of opening the doors to a real movement that would support them.

POWELL: And the hard right is—you know, it’s not just numbers. There’s an intensity that we seldom see on our side. And, unfortunately, there are sides right now, because there are some people who think still think of this country as belonging to white people, belonging to Christians, belonging to. And we have to push back, we have to offer an alternative, and I think we have a better alternative. And I’m willing to fight for that. But we have to be willing to fight, not to the exclusion of those people who would exclude us, but to the exclusion of that ideal that this country is a narrow country only for some people.

JAY: Well, is part of the problem that there is a black elite and they’re not quite sure which side of the barricades they’re on?

POWELL: Well, I don’t think it’s a problem because of black elite. I mean, there’s going to be black elites, white elites, Latino elites. The thing is is that I think in terms of—we’re in a deep transition as a country. We just had the largest economic crisis since the 1930s. We’re watching the country go through demographic change. We’re watching the world change in terms of globalization. In a sense we have an identity crisis, and leadership from various quarters need to step up and talk about a new vision. Instead what we do is we hunker down; we try to protect our family and our house in our neighborhood; we try to solve public problems through private strategies. And all this stuff about personal responsibility leads into that. How do you fix climate change through private strategies? Sure, I—you know, and I—.

JAY: You can change your lightbulb, but—.

POWELL: Exactly. Exactly. But that’s not going to solve it. And we need to be willing to think bold, think big, and fight about it.

POWELL: Thanks for having me.

john a. powell is Director of the Haas Institute for a Fair and Inclusive Society and Professor of Law, African American, and Ethnic Studies at the University of California, Berkeley. He previously served as the Executive Director at the Kirwan Institute for the Study of Race and Ethnicity at Ohio State University and the Institute…