Photographer Jenna Pope speaks about her arrest at Wisconsin Capital protest, her work and activism

Photographer Jenna Pope speaks about her arrest at Wisconsin Capital protest, her work and activism 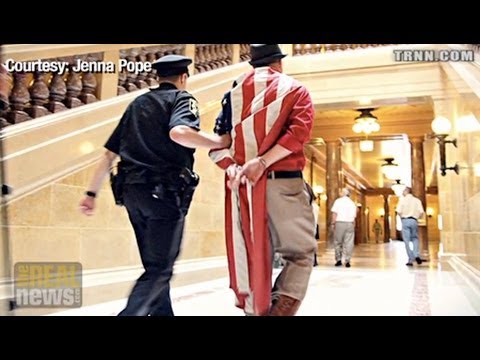 JAISAL NOOR, TRNN PRODUCER: In Madison, Wisconsin, on Tuesday, August 6, demonstrators were again arrested at the State Capitol Building at what’s being dubbed the Solidarity Sing-Along in protest of Republican Governor Scott Walker. The protesters have gathered at the capital rotunda every weekday at noon since May 11, 2011, to voice their opposition at what they say is a governor who is increasingly suppressing his political opposition. But for the past two weeks, capitol police have been arresting singers and bystanders and journalists for taking part in what they say is an unpermitted event. Activists maintain they don’t need a permit to protest on public property. More than 100 tickets have been issued over the past two weeks. But the activists say they will not be deterred.

Among those arrested in August 6 was Real News contributor Jenna Pope.

JENNA POPE, FREELANCE PHOTOGRAPHER AND ACTIVIST: My name is Jenna Pope. I am a freelance photographer. I’m also an activist. I am currently in the Wisconsin State Capitol, which is actually my home state. I currently live in New York City, but I traveled back here once I heard people who were participating in the Solidarity Sing-Along, which has been going on for two and a half years, have been getting arrested simply for standing in their state capitol in a public space singing songs to voice their opinions against Governor Scott Walker. And I’ve been here for a few days in a row now.

And today I was singing and I was holding a sign, and they came up and they asked me to stop singing and leave the building or else I’d be subject to arrest. I kept singing, and so they arrested me. I guess sign-holding and singing is a ticketable offense under Walker’s administration.

A lot of people keep asking, you know, why don’t you just get a permit? And the only issue is we’re protesting our government. You know, we’re not, like, here to have a wedding. Like, I understand if you have to reserve the space for a wedding. A lot of people get married here. That makes sense to reserve the space through a permit. We’re here to voice our opposition to the current administration. So why would we have to ask them for permission to protest them? It doesn’t make any sense.

So I think it is our First Amendment right to come here and, you know, voice our opinions.

And the sing-along has been very good about going outside when there is a permitted event in the capital at the same time. So they are not in any way disrupting the normal permitting process. They definitely follow the rules on that.

NOOR: And this isn’t the first time you’ve been arrested here. Can you talk more about kind of, like, what’s been happening here and your involvement?

POPE: No, this is probably, like, the–I don’t even know–tenth or 11th time I’ve been arrested. It’s all been civil disobedience, for various reasons. My first ticket I got was in March 2011. For about four days they said that it was illegal to hold a sign or demonstrate on the first floor. The demonstration area was supposedly only on the ground floor, although the first floor is also a public space. It’s always been a lot of First Amendment stuff and, like I said, the filming in the assembly gallery. It has all been stuff that’s actually protected under either, like, Wisconsin state statutes or the U.S. Constitution or the Wisconsin Constitution that I’ve been arrested for, things that should have been protected and I should have had the right to do.

NOOR: And finally, you haven’t just been here. You’ve been traveling around the world and around the country, including stuff for The Real News in, like, Turkey and North Carolina. Can you talk a little bit about your experiences? And a lot of that’s related to reclaiming public space and reclaiming their government. This isn’t just happening here. It’s happening all over the world. Can you talk about your experiences a little bit?

POPE: Yeah. Well, I just got back from Turkey about a couple of weeks ago. That was my second trip there. The first time I was there, it was while they were occupying Gezi Park, which was awesome, inspiring. It was so great to be there. During my first trip was when they came in and they cleared out the park using tear gas and water cannons and plastic bullets. So I was there for that. And then I went back again for about ten days when it was a little different because they didn’t have the park. The park was open. It was cleaned up. But it was a bit different. The police response was a bit different. They were a little more aggressive. And yeah.

Also, between my two trips I was down in North Carolina for the Moral Mondays. I was there for the tenth week when I photographed people being arrested in their, you know, statehouses there. So that was definitely cool to be there for that.

I don’t know. I’ve been traveling all over, like you said, doing a lot of reporting for The Real News. We actually did a story with some of my photos last week from the Wisconsin Solidarity Sing-Along.

NOOR: People are in these different places for a lot of different reasons. But do you see any, like, commonalities or common threads that tie kind of everything together that you’ve seen?

POPE: I think a lot of people are just sick of the oppressive authoritarian governments that we’re all living under who think it’s alright to take away rights that I think should just be general human rights, and they shouldn’t even have to give them to us in the first place. But now they’re trying to, like, slowly take those away. And people aren’t having it. You know, they’re stepping up and they’re fighting back. And I hope it keeps on happening all over the world.

NOOR: So, as an observer that doesn’t travel as much as you do, it seems to me that people definitely find solidarity in everything that’s happening around the world, no matter where they are. Do you think that’s the case from what you’ve seen?

POPE: Yes, I definitely do, especially since I just got back from Turkey. I now have a large network on my social media sites, on Facebook and Twitter, of Turkish activists. And now that I’m back here in Wisconsin, they’re paying attention and they’re actually commenting. A lot of them, they’ve been saying, you know, [djUrIn] Wisconsin, which means resist Wisconsin. They’ve been, you know, sending a lot of comments of solidarity. They’ve been sharing my photos.

And I actually today brought this sign. It’s one of the common chants in Turkey that I heard a lot. It’s Faşizme karşi omuz omuza! which means shoulder-to-shoulder against fascism. So I wanted to make a direct connection. And I didn’t realize I would be getting arrested while holding this sign. But I did get–earlier in the day I got me holding this sign next to somebody else getting arrested. So, yeah, we actually got some photos with this.

Hopefully the people in Turkey will enjoy that we’re fighting back here, too, and we’re also thinking about them while we’re doing it.

NOOR: Thank you so much.

NOOR: Go to TheRealNews.com for more on the Madison capital protest. This is Jaisal Noor in Madison, Wisconsin.