Juan Parras: Though the clean up is progressing, it will take weeks to determine the extent of the ecological impact of the major Galveston oil spill

Juan Parras: Though the clean up is progressing, it will take weeks to determine the extent of the ecological impact of the major Galveston oil spill 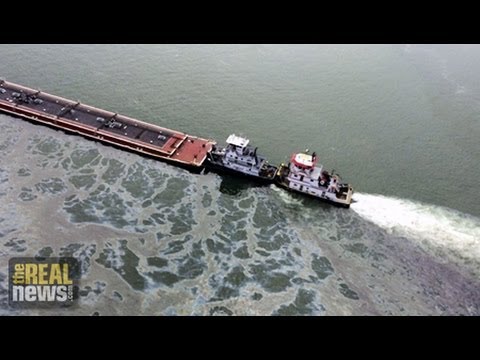 A hundred and seventy thousand gallons of unrefined crude oil has spilled into Texas’s Galveston Bay after a transport barge collided with a ship over the weekend. It’s blocking traffic to the Houston Ship Channel and one of the world’s busiest waterways for transporting petrochemicals to major American refineries. The spill is also near major bird sanctuaries at a time migrating birds are in heavy numbers.

Now joining us to discuss this oil spill and the ongoing cleanup crisis is Juan Parras. Juan is the executive director of the Texas Environmental Justice Advocacy Services, or TEJAS.

Thank you so much for joining us, Juan.

NOOR: So, Juan, bring us up to speed with what’s happening in Galveston Bay right now with this cleanup underway.

PARRAS: Well, according to what the news media is reporting, they said because of the quick response that our coast guard had and those that deal with water quality issues, they’re indicating to us that it’s pretty much cleaned up. And, of course, we have serious doubts regarding that. But they’re saying it’s cleaned up for the most part, and they actually are allowing ships that were in the Gulf of Mexico, they’re allowing them to come back into port, and those that were locked in are now being allowed to go back to the Gulf of Mexico.

NOOR: And talk about what your concerns are with this news. Is there any evidence that contradicts the statements of officials that say it’s been cleaned up for the most part?

PARRAS: Well, there’s no evidence right now that would contradict that. We’re in the process of, you know, taking water samples and oil samples to see how good the cleanup was, because they’re saying it’s cleaned up.

But the other thing we have to remember is that, you know, if you remember the BP oil spill, that did a lot of damage to the Gulf Coast. And so this is just another incident of how, you know, toxic situations can get when we do have oil spills in the Gulf or in the intercoastal ship channel canal.

So it’s going to take time before that evaluations are out. It’s not going to be immediate.

NOOR: And, Juan, you mentioned the BP oil spill four years ago, almost to the day now. And this spill comes almost 25 years to the day of another major spill–that’s the Exxon Valdez–and after this spill there was regulations, the oil pollution control act. We’ve seen a better response time now. What’s your response?

PARRAS: Well, our response is that we need to still do more.

You know, the Exxon Valdez, like you said, it’s the 25th anniversary of it. The BP oil spill, it’s the fourth anniversary. And we still have a lot of unanswered questions as far as, you know, the huge impact that it has on the ecosystems, the pelicans, the migratory birds, the fish. So there’s still a lot of unanswered questions. And I think–I hope it doesn’t take another 25 years, you know, to get definitely to conclusive answers as to how we deal with emergencies like this and how we can actually prevent them.

NOOR: And we just mentioned the regulations passed in the wake of the Exxon Valdez oil spill. Do you think these regulations are enough? Or, you know, some would argue that these spills are unavoidable when you’re extracting, you know, vast amounts of natural gas and oil from the ground and transporting them across the world.

PARRAS: Well, I think you hit it right when you said that most of those incidents are not–well, not really unavoidable. I think they’re–are avoidable. But the magnitude of just extraction of oil from the, you know, Earth and then the huge magnitude of all the ships that will be transporting all this cargo, you know, to other countries in here, in the U.S., it’s getting larger and larger. So because of the frequency of more ships in the ocean and more oil being transported, I think that we will continue to actually have more incidents of this type.

As far as the regulations that the administration came out with on–cut a deal with oil spills, I think they’re good in one respect, but I think we also have to identify, you know, maybe limit as to how much the tankers can carry, and also figure out the toxidity of what they’re carrying before it’s even put out to sea. That way we have an idea of what we’re dealing with. A lot of times the problem with oil spills is that we don’t know the toxidity of it and how to actually apply dispersions or how to actually control it from getting out to, you know, areas that are critical habitat.

NOOR: Juan Parras, we want to thank you for joining us. And we’ll certainly keep following this story.

PARRAS: Well, thank you for your time again. I appreciate it.

Juan Parras has worked in the public sector for most of his working years. He began in 1976 as a Harris County Welfare Counselor; City of Houston Community Development Block Grants Housing counselor; International Union Organizer for the American Federation of State, County, and Municipal Employees; Community Organizer for Environmental Law and Justice Clinic at…