Following the November 30th International day of rage against the forced urbanization of the Bedouin in Israel’s south, the Israeli police ordered all media to hand over footage gathered during protests. The order marked a drastic turn for Israeli freedom of the press, already at an all-time low. This year Israel ranked 112th of 179 countries in the Reporters Without Borders (RWB) World Press Freedom Index. The Real News' Lia Tarachansky spoke to Yizhar Be’er, Executive Director of Keshev, a media watch-dog group consulted in the RWB index, Shuki Tausig, co-editor of The Seventh Eye, a renowned Israeli online magazine that focuses on media criticism, and Gershon Baskin, an Israeli journalist and columnist at the Jerusalem Post.

Following the November 30th International day of rage against the forced urbanization of the Bedouin in Israel’s south, the Israeli police ordered all media to hand over footage gathered during protests. The order marked a drastic turn for Israeli freedom of the press, already at an all-time low. This year Israel ranked 112th of 179 countries in the Reporters Without Borders (RWB) World Press Freedom Index. The Real News' Lia Tarachansky spoke to Yizhar Be’er, Executive Director of Keshev, a media watch-dog group consulted in the RWB index, Shuki Tausig, co-editor of The Seventh Eye, a renowned Israeli online magazine that focuses on media criticism, and Gershon Baskin, an Israeli journalist and columnist at the Jerusalem Post. 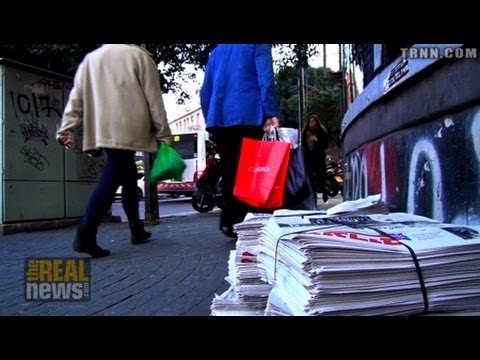 LIA TARACHANSKY, TRNN PRODUCER: Following last Saturday’s international Day of Rage against the forced urbanization of the Bedouin in Israel’s south, the Israeli police ordered all media to hand over footage gathered during the protests.

While there is no law in Israel protecting journalists from being forced to reveal the identity of their sources, there have been strong legal precedents defending them. Sunday’s police order has therefore marked a drastic turn for Israeli freedom of the press, already at an all-time low. This year, Israel ranked 112th of 179 countries in the Reporters without Borders World Press Freedom Index.

The Real News spoke to Yizhar Be’er, a former correspondent for Ha’aretz in the occupied Palestinian territories and today the executive director of Keshev, a media watchdog group consulted in the Reporters without Borders index.

YIZHAR BE’ER, EXEC. DIR., KESHEV (SUBTITLED TRANSL.): Firstly, the Israeli press has a far stronger impact than in other places. And secondly, problematic coverage or failures in the coverage of, for example, the conflict can lead to a far more dramatic impact.

TARACHANSKY: According to the report, the number-one impediment to the freedom of the press is the Israeli Military Censor, a body all journalists must consent will review their publications on conflict and security issues if they wish to receive a government press card.

Shuki Tausig is the coeditor of the Seventh Eye, a renowned Israeli online magazine that focuses on media criticism.

SHUKI TAUSIG, COEDITOR, THE SEVENTH EYE (SUBTITLED TRANSL.): The Military Censor is the image. The question is: what’s behind it? Is there a secret police behind that image? Prisons? Barbed wire fences? No. Unequivocally, no.

INTERVIEWER (SUBTITLED TRANSL.): The responsibility is on you as a journalist to pass your articles to the Censor, whether it is liberal or not. The very fact that you do has some impact on what will be in the article.

BE’ER: Yes, absolutely. I agree with you. In essence, in the Israeli context, a security journalist in a paper can’t be too critical as a journalist, because if the army doesn’t cooperate with him, he won’t be able to do anything.

TAUSIG: To focus on the Military Censor misses the main point. Today, the power has shifted from the Military Censor to the courts and the gag orders. Today the biggest restriction to freedom of press in Israel is the gag orders, and not just on security issues–on all issues. Today, the authorities–the secret service, the police, the army–know that it’s more effective not to turn to the Military Censor. But to a court, preferably a low-level one, like the Magistrates Court in Beersheba with the protests last week, turn to some magistrate judge and tell her it’s secret material, and she signs the order.

GERSHOM BASKIN, COLUMNIST, JERUSALEM POST: I can tell you my book went through the Military Censor, and I saw what they crossed out and what they accepted, and it was a joke.

TARACHANSKY: Gershom Baskin is a columnist who, while identified with left-wing politics, has been published in most Israeli press, including right-wing and religious papers.

BASKIN: It will be increasingly difficult to keep secrets, and more and more of the public will be exposed to it because of the public’s huge amount of engagement on a daily, on an hourly, on a minutely basis with social media.

TARACHANSKY: But the official censorship is only a part of the problem. Because court-issued gag orders only apply to Israeli journalists, oftentimes foreign media releases materials that are censored in the Hebrew press, revealing them to the public. For example, Israel’s 2007 bombardment of the Syrian nuclear reactor in Deir ez-Zor region.

BE’ER: The large number of publications in such a small state threatens them financially. All the media outlets in Israel are under an existential financial threat. When a media outlet struggles financially, politicians and the government can pressure it more easily. And that’s what’s clearly happening today in Channel 10.

TAUSIG: The biggest problem of press in Israel is its poverty. The owners don’t earn as much as they want to. They cut jobs all the time, bring in younger journalists, journalists with no professional confidence, and everything shrinks into survival mode.

BASKIN: The press is a business, and the press has to sell newspapers. The largest newspaper in terms of distribution in Israel is a freebie. It is a political freebie supported by Sheldon Adelson with a very definite political line that supports the prime minister in particular and the government in general.

TAUSIG: Most issues in Israel today are under-covered on all issues, not just security issues. About a year or so ago, a man set himself on fire, Moshe Silman.

INTERVIEWER: Since then, a dozen others also set themselves on fire.

TAUSIG: That’s right. No one covered it. Only Maariv wrote a little something. They continue to do that. But it wasn’t covered in any paper. It disappeared.

Besides all that, the security issue is different and unique, in the sense that in the end of the day, the coverage is of a conflict that the journalist is a part of. The Israeli journalist covering the Israeli-Palestinian conflict is a part of the conflict. It’s true that he’s a journalist and should be objective, but how you ask how can at a time of war all the press stand at attention. What happened when the U.S. invaded Iraq?

BE’ER: During the last war in Gaza, more than 90 percent of the Jewish population–dramatic proportions–supported the military action. Imagine a media outlet that decides to criticize the military actions or their justification, or even just offered alternatives, when it’s going to upset that vast majority of media consumers.

TARACHANSKY: Following the Oslo agreements of 1993, a system of official segregation has been implemented in the occupied Palestinian territories. As a result, today Israeli citizens are not allowed into Palestinian cities in the West Bank and into Gaza. Nearly all Palestinians are forbidden from entering any of the Israeli territories. While Israeli journalists can bypass these restrictions in some cases, with the exception of a handful, none do.

INTERVIEWER: How can it be that the journalists in Israel aren’t protesting over the fact they’re forbidden to enter Gaza? How can it be that they’re not only not upset about not being able to be there, but even when they can–with the government press card they can enter Ramallah–they still don’t go, and more than that, it doesn’t interest them?

BE’ER: Yes. Your question is more important than all the law proposals. In recent years there are law proposals that limit freedom of speech, or threaten to do so, and I think it’s the biggest threat to freedom of the press in Israel–I mean journalists’ self-censorship and the public’s acceptance that self-censorship is a good thing. Recently, we, Keshev, and the Tel Aviv University did a survey, a survey of the Israeli public, and found the majority justifies the journalists’ self-censorship on certain issues, such as security and conflict issues.

BASKIN: Every year, the Israeli Democracy Institute does a democracy index, and one of the areas that they check is how different institutions in Israeli society are perceived by the public in terms of their legitimacy, in terms of their truth-telling. And the Army is, has been, and probably will be the number-one institution in Israel which is perceived as legitimate and supported by the public. The high court is generally number two. Political parties is way down at the end of the list. The government and the prime minister are much lower. The police is much lower than it’s been before. The army is the central element of Israeli consensus. And that has a great extent to do with the fact that most Israeli Jews are part of it.

TARACHANSKY: But the Israeli army regularly not just conceals but actually lies about its actions.

TARACHANSKY: And the media doesn’t want to tell.

BASKIN: No, ’cause the public doesn’t want to know and the media is failing to do its job.