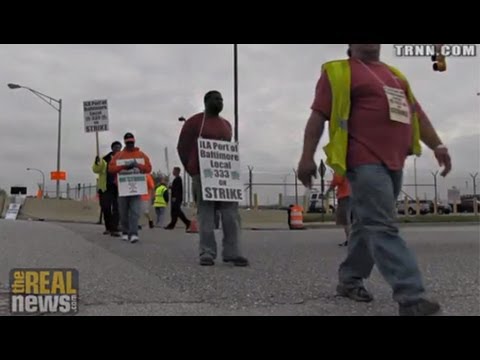 JAISAL NOOR, TRNN PRODUCER: This is the port of Baltimore, where some 1,300 longshoremen went on strike at midnight Wednesday. The union local no. 333 shut down the port after contract negotiations stalled with the Steamship Trade Association. The port handles more than 30 million tons of cargo per year as the 11th-largest port in the united states.

The Real News spoke to some of the striking longshoreman, who say they’ve been working without a contract since 2010.

ALONZO KEYS, LONGSHOREMAN, ILA LOCAL NO. 333: The problem is, the conditions don’t change. We seek better conditions. We want to work in a safer environment. We want an opportunity to be more productive. And if the contract doesn’t allow for those changes, we can’t arbitrarily change anything.

NOOR: About 2,000 dock workers are affected by the strike, according to The Baltimore Sun.

CBS News reported that Richard Scher, a Maryland Port Administration spokesman, said: “The Port Administration is hopeful that the Steamship Trade Association and the ILA would be able to sit down and come to an agreement. The Port of Baltimore is the only port from Maine to Texas not working today, and it’s very regrettable. Attempts are being made to have discussions today, and hopefully they are successful.”

The Real News contacted the Steamship Trade Association but did not receive a response.

Bill Barry is the retired director of labor studies at the Community College of Baltimore, Dundalk. He argues the United States Maritime Alliance is using the expansion of the Panama Canal as an excuse to demand union concessions.

BILL BARRY, RETIRED DIRECTOR OF LABOR STUDIES, CCBC DUNDALK: Well, what’s happening here is a local strike which is part of a nationwide negotiation, East Coast negotiation by the Longshoremen’s Association. And as I said, it’s intensified by the expanding of the Panama Canal and the changing of the industry, because ships will now, which normally would only go to the Pacific Coast ports, will now come here. And so the Maritime Institute seems to have felt that this is a time where they need to go after the union, both on a national level on issues of wages and benefits, and then on a local level. And the strike here is over local issues. And every large national negotiations involves two levels, one of which is the money and the benefits, which is done industry-wide, and in this case up and down the East Coast, plus local issues, which vary from region to region, local to local.

KEYS: If you permit those greedy corporate raiders or the people who are in corporate America to have their way, they’re going to manipulate it so that again we are at the bottom of the totem pole. And it is un-American, what they’re doing. They want us to work like sweatshop workers. You know what I mean? They want us to work for inferior wages. They don’t want us to have an opportunity to educate ourselves and our family. It is indicative of what’s happening across the United States right now. And it’s not just Baltimore. It’s Wisconsin. You know what I mean? It’s New Jersey. It’s all those states where the wealthiest of Americans are just bastardizing the rights of the rest of us, the 99 percent.

NOOR: Some are critical of the strikers and say their actions will have a detrimental impact on the city’s economy. But the longshoremen we talked to said they’re willing to maintain the strike because their fight is part of the bigger struggle.

ANDRE HOLDEN, LONGSHOREMAN, ILA LOCAL NO. 333: They want us, the working people, to fight among each other with respect to race, sexism, classism. They want us to be always competing so they can just reap the rewards. You know, I mean, I can give you another example. Look at Walmart. They don’t want to pay the people their fair wages and benefits. Look at the fast food industry. They know that they’re making millions of dollars, and they don’t wanna pay them people fair living wages. It is a scheme to try to undercut the American way. I believe they are the traitors of this country.

NOOR: At the time of publishing, its unclear just how long the strike may last.

Reporting for The Real News, this is Jaisal Noor with Anton Woronczuk.