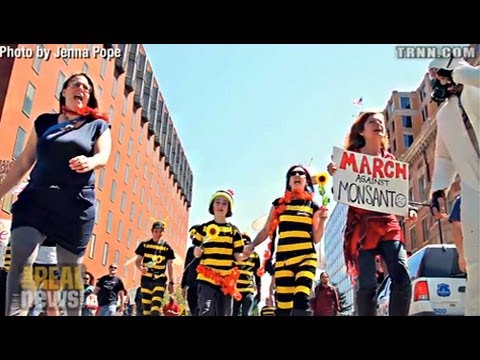 JAISAL NOOR, TRNN PRODUCER: In Washington, D.C., on Saturday, May 25, hundreds took to the streets as part of a global day of action against one of world’s most powerful biotech firms, Monsanto.

Protesters gathered in front of the White House to demand President Obama do more to check the influence of Monsanto, which critics accuse of bullying small farmers, having undue influence on public policy, and aggressively promoting genetically modified foods.

RICA MADRID, OCCUPY MONSANTO: Monsanto is the most evil company in the whole world. They produce genetically modified organisms. They also produce very harmful chemicals. And these chemicals end up in our food without a label on them. So we’re here to say we need to stop Monsanto, we need to stop the ties within Monsanto to our government and change the food back to a more sustainable variety that we had in our parents’ era.

NOOR: But Monsanto CEO Hugh Grant argues that GMOs are necessary to fight world hunger and accused critics of “elitism”. He told Bloomberg.com, those who can pay more for organic food want to block others from choosing more affordable options.

ERICA PORCH, ANTI-GMO ACTIVIST: I don’t believe GMOs will feed the world. There is enough food in the world for everyone to eat. It’s about money and power. People who can afford food have food. People who can afford good food buy organic ’cause they know it’s good for them. People who are forced to eat cheap food and live in food deserts and eat fast food ’cause they think it’s cheaper for their family, those people are paying a long-term cost in medical expenses, shortened lifespans, poor quality of life.

And then we’re picking up the slack as taxpayers, too, because these are people who are sick all the time and don’t contribute and are getting social programs, and it’s because they can’t afford good food. So it’s about money and power and control. It’s not about feeding the world.

NOOR: Some like Porch have turned to organic farming as an alternative to Monsanto. Again, Rica Madrid.

MADRID: Monsanto will have you believe that their crops will reduce drought and feed the world, have higher nutritional content or something like that. But that’s not true, because the majority, pretty much all the seeds that they develop are either sterile, which means they’re terminator seeds, they’re not able to reproduce, or they contain pesticide and herbicide sort of ingredients within the plant that you can’t wash off, or they’re more tolerant to these herbicide, pesticide resistance, and that means that they can spray higher and higher doses of their chemical compound glyphosate Roundup poison on them. This is absolutely unbelievable.

NOOR: The passage of the Farmer Assurance Provision, commonly known as the Monsanto Protection Act, helped fuel the day’s protests. Among other things, it bans courts from stopping the sale of Monsanto’s genetically modified seeds.

Monsanto scored a victory Thursday when an effort to repeal the bill was killed in the Senate, along with another measure that would let states decide if they wanted to require genetically modified foods be labeled.

MADRID: I think the Monsanto Protection Act and actions like this are really detrimental to our democracy, especially regarding food. When a company has no liability to the public as far as, you know, getting sued for cross-contamination and pollination of their crops and when municipalities are being fought on the issue of being able to label GMOs in their own communities, that’s a real problem with our own democracy in this country.

NOOR: The march culminated at Monsanto Headquarters, where activists dressed as bees staged a die-in to draw attention to the dramatic decline in the bee population of Europe and the United States. Though no exact cause to the bees’ decline has been determined, activists say the pesticides made by the likes of Monsanto plays a hand.

Kelly Kennovin says the loss of the bee population would devastate the world’s food supply.

KELLY KENNOVIN, ANTI-GMO ACTIVIST: We depend on bees to pollinate something between 70 and 90 percent of the food that’s grown in this country. So without the bees, we’re in a lot of trouble.

NOOR: Despite the massive weeks-long outreach effort, some like Erica Porch say they were disappointed by the turnout at the march. Porch says to affect change at Monsanto, more has to be done to reach out the vast majority of Americans, for whom it may be difficult to accept that eating genetically modified foods could be harmful.

Reporting for The Real News, this is Jaisal Noor.

[Additional credit to Dharna Noor for this story.]