With two thousand veterans expected to join the opposition to the pipeline, Water Protectors say they remain resilient despite eviction orders

With two thousand veterans expected to join the opposition to the pipeline, Water Protectors say they remain resilient despite eviction orders 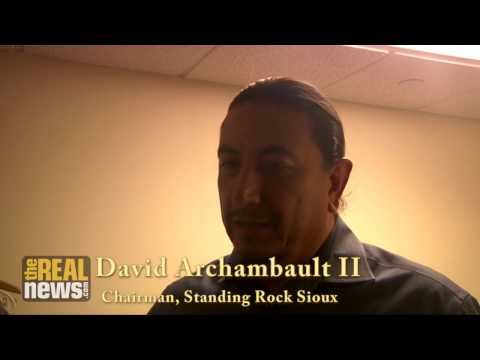 This is the Chairman of the Standing Rock Sioux Tribe, David Archambault.

NOOR: This happening even as the state of North Dakota has said they will fine anyone bringing supplies to the camps opposing the nearly $4 billion dollar Dakota Access Pipeline.

Evacuation, according to the order, is for the protesters own good given the harsh winter conditions that have hit the area.

And after first promising to block any supplies entering the camps from roads to the north, officials say they will just fine those doing so.

NICK TILSEN: I would reiterate that they have been blocking supplies from the north since October 27th. I don’t know if the American public understands that but emergency management vehicles have not been able to go north on 18 since October 27th. Supplies have not been able to come from the north to the south highway 1806 since October 27th. So these threats, part of it is the reality. I mean, they have been blocking this entire time. I think that part of it is that it shows that we have a pretty racist Governor up there in North Dakota and I’ll come right out and say it that I believe that he is all out racist and that he is abusing his power as governor against indigenous people and the water protectors that are there to protect the water.

NOOR: And I want to ask you about that because Greenpeace put out a statement in which they also cited his financial ties to the pipeline and to the industry. Do you think that also presents a conflict of interest along with president elect Donald Trump’s financial ties to the pipeline as well? He’s got tens of thousands of dollars invested in it.

TILSEN: Yea I mean, the business in North Dakota is business of oil. So, you’ve got the governor. You’ve got president-elect Donald Trump has ties to Phillips 66. Has ties to Energy Transfer Partners and even though the president elect had taken some of the stock out of Energy Transfer Partners, some of it still remains in there and obviously still has ties to Phillips 66 which is one of the biggest investors in the pipeline. So absolutely I think that this is the classic story of a governor who’s been bought off by the oil industries and his interest is that’ who he’s there to represent. I think that’s true for a lot of the politicians in North Dakota and why politicians who are in North Dakota, are so against and going over the top of trying to diffuse this movement of trying stop the Dakota Access Pipeline.

TILSEN: I think with the veterans coming, it’s pretty powerful. I mean I had the opportunity to talk to Wesley Clark Jr. two days ago, and the last time that I talked to him he said that 2000 veterans were coming and they were coming here to stand with the indigenous people up here in Standing Rock. And they wanted to stand in solidarity with us because they believed that this project that the state of North Dakota that Morton County, that the powers that be that have bene abusing their roles and abusing their powers that they have as the federal government and the state government and the local government is unamerican. What a better message to come from than veterans who have actually risked their lives for the very freedoms that we all have.

NOOR: Stay tuned to the real news dot com for the full interview with Nick Tilsen.

This is Jaisal Noor.

February 25, 2019
Sign Up for Our Newsletter
Help Us Make Real News!