Residents, attorneys and law enforcement officials offer testimony on whether the Maryland legislature should repeal key components of the Law Enforcement Officers' Bill of Rights.

Residents, attorneys and law enforcement officials offer testimony on whether the Maryland legislature should repeal key components of the Law Enforcement Officers' Bill of Rights. 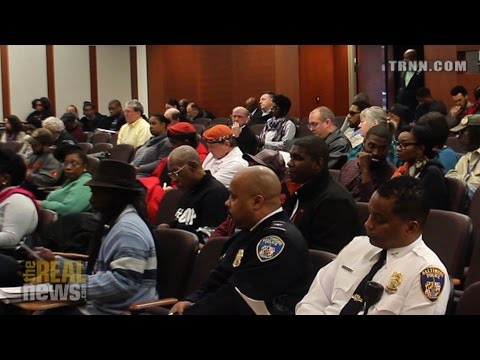 JAISAL NOOR, TRNN PRODUCER: It’s Saturday, November 22, and the Baltimore City delegation to the state capital, Annapolis, has hosted a hearing about increasing accountability of law enforcement. As The Real News has reported, Maryland state law is a key obstacle to greater civilian oversight of police.

The current civilian review board has been unable to stem a rising tide of excessive force allegations against the police, such as the recent video of an officer brutally punching Kollin Truss in the face or the hundred cases of brutality the city has settled to a tune of $5.7 million over the past three years, as a recent Sun investigation revealed.

JILL P. CARTER, MARYLAND DELEGATE: The purpose of this is to bring the legislative arm here to Baltimore and hear from people here, because very often when we sponsor this legislation or we try to advocate for it in Annapolis, there is no connection between Annapolis and the pain the people are feeling here, and it’s very difficult to get large numbers of people to come and tell their stories to us, and so to ensure that some of my colleagues don’t think that it’s a myth that these things occur and that these are the real problems.

NOOR: Also testifying was the family of Tyrone West, a man who was beaten and killed by Baltimore police officers.

DIANE BUTLER, RELATIVE OF TYRONE WEST: My question is for the police. When was the beating supposed to stop? My son was on the ground screaming for the beating to stop. Was the beating–was it supposed to continue till he was no longer breathing, no longer moving? My son was dead, and your police officer still was kicking him in the back of his head. And he was cuffed! It was a supervisor that was supposed to come and, I guess, to see what was going on and, hopefully, put a stop to this brutal beating. He did not. He participated.

NOOR: Also testifying were attorneys and former law enforcement about why they support greater civilian oversight and accountability of police.

SONIA KUMAR, STAFF ATTORNEY, ACLU OF MARYLAND: –in particular want to bring up the Law Enforcement Officers’ Bill of Rights. We don’t really need to take on the entire LEOBR. There are a couple of really key provisions I think that folks should be attentive to, and they have to do with this notion that only police can police themselves, which is in fact the opposite of what we have found across the country, right? What we’ve seen is that there’s a culture of protecting each other in the police force. And so a couple of the key provisions that preclude the types of robust civilian review that we want to see are the provisions that require that only other sworn law enforcement personnel can conduct investigations and conduct hearings that impose discipline.

DR. MARVIN L. “DOC” CHEATHAM SR., CIVIL RIGHTS ACTIVISNT: We also feel–and the issue that will probably be the one that’s most controversial is to allow subpoena powers of not only certain documents, but also certain employees, not just Baltimore City police employees, but any employee that could help in the testimony of a case to find out whether or not a citizen was or was not harmed.

NOOR: Also speaking out against a provision in the Law Enforcement Officers’ Bill of Rights that affords officers ten days after an incident before they’re compelled to speak to investigators was Stephen Tabeling, a retired lieutenant in the Baltimore Police and former chief of police in Salisbury, Maryland.

STEPHEN TABELING, FMR. BALTIMORE CITY HOMICIDE LIEUTENANT (RET’D): Back in the ’70s, Commissioner Pomerleau gave me the responsibility of investigating all police-related shootings. I was here today because I’m against the ten-day rule that officers have. I think they need help, but I don’t think ten days is the proper time. An officer can waive that right, but their FOP seems to be telling them all the time, you stick to that, don’t you bypass that right. But it’s really bad, because you can’t get any information, and when you go that long period of time, minds don’t work the same.

BILL FERGUSON, MARYLAND STATE SENATOR, 46TH DISTRICT: Is there a metropolitan region that’s been seen sort of universally as a model for an effective–.

FERGUSON: A civilian–yeah. Excuse me.

KUMAR: I think it depends on who you ask. I think the D.C. civilian review board, for example, has much more authority. It has 20–I mean, one of the things that Doc didn’t mention is the funding issue, right, is that we have a staff of one on the Baltimore Civilian Review Board, I think, maybe two. They have a staff of 20 and a $2 million budget. And I think that alone actually is really significant, because they have the capacity to actually investigate, for example. But I think we–at the–folks who were at the town hall Wednesday heard the sort of extraordinary model they have in Toronto, where there is actual also governing power in their police accountability board. And I think that’s–we should be really looking at that as whether something like that is possible. But D.C. is more similar to the model we already have, but with, I think, significant improvements.

NOOR: Representatives of law enforcement said they had no comment about whether they support changes to the Law Enforcement Officers’ Bill of Rights.

LT. COL. CARNELL GREEN, BALTIMORE POLICE DEPARTMENT: As we and all know that the bill of rights is being reviewed, at this point we cannot discuss the law enforcement bill of rights.

And then finally, finally–.

DAYVON LOVE, LEADERS OF A BEAUTIFUL STRUGGLE: What was good, though, about this hearing is that you don’t hear any substantive arguments on the opposition’s side in terms of why not to make these certain amendments to the law enforcement bill of rights and why not to give civilian review boards more disciplinary power and governing power in terms of addressing issues of police misconduct. And so it’s good that it’s happening in a public forum, and I think it’s good for this to be on the record, ’cause this will help folks in Annapolis who are talking to legislators to talk about the things that the opposition will say and pretty much make clear that there are really no substantive arguments against both the civilian review board, giving that more power, and amending the law enforcement bill of rights [so] that [it] will produce greater accountability for law enforcement.

CARTER: What I’m hoping this is and my plan is to take the names and the people that are here, ask them to contact one or two, three, four, five more, and build a group, a movement to come to Annapolis to champion legislative change and to testify–and not just testify, because it takes more than testimony. It takes actual advocacy. It takes actually reaching out to your specific legislators, specific legislators on the committee, the leadership–to Chairman Vallario, to Speaker Busch, Mike Miller (probably the toughest nut to crack of all)–and saying, we demand change, that policing must change, that no death should result as a result of so-called law enforcement, and that whatever changes that we need to do to secure the safety and the protection of the people, we need to do it, while still not taking anything away from the safety and protection of law enforcement.

NOOR: It remains to be seen if Annapolis will listen to the demands of the people and expand civilian oversight of police.