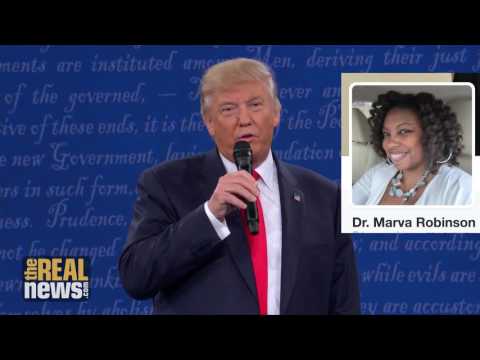 DONALD TRUMP: Because you know what? People have been—their lives have been destroyed for doing 1/5th of what you’ve done and it’s a disgrace and honestly you ought to be ashamed of yourself.

MARTHA RADDATZ: Secretary Clinton I want to follow up on that. I’m going to let you talk about [emails]—

HILLARY CLINTON: Let me just quickly say because everything he just said is absolutely false but I’m not surprised. In the first debate.

RADDATZ: The audience needs to calm down here.

CLINTON: In the first debate I told people that it would be impossible to be fact checking Donald all the time. I’d never get to talk about anything I want to do.

NOOR: Debate excluded third party candidates Jill Stein and Gary Johnson. We got instant reactions from experts including historian Gerald Horne, Dr. Marva Robinson and Iraq war veteran and journalist Mike Prysner to respond to what was and wasn’t discussed.

DR. MARVA ROBINSON: It is absolutely appalling. Especially to be held at a university less than 10 miles away from Ferguson, for you to have two presidential candidates sit there and talk for 90 minutes and no one talk about police brutality and the killings of unarmed black men and women. It’s a shame and it goes back to the first point about why is it now that there’s these explicit comments about women that has everyone up in arms but not his racist comments?

MIKE PRYSNER: This is the greatest crisis, the greatest possible calamity facing the human species ever in our entire hundreds of thousands of years of existence on this planet. This was not a question in the debate. The US being of course one of the biggest polluters in the world.

GERALD HORNE: We’re presented with these two unappetizing choices. Obviously this should mandate a search for reasonable alternatives to these two candidates.

NOOR: The event was overshadowed by video released Friday showing Donald Trump describing sexual assaulting women, prompting many members of the Republican leadership to withdraw their endorsements and urging Donald Trump to drop out of the race.

TRUMP: And when you’re a star they’ll let you do it. You can do anything.

BILLY BUSH: Whatever you want.

TRUMP: Grab them by the pussy. You can do anything.

BUSH: Yea those legs. All I can see is the legs.

RACHEL KATZIN: It was horrifying to see because words are a form of harassment and harassment leads to action and he is definitely like standing for rape culture when he makes those comments and I think that’s a terrible thing especially as a student on a college campus where it’s a time in America. We’re trying to define consent. We’re trying to define those limits and he’s definitely pushing them back.

JAMAR MCDONALD: Whenever that I hear that someone is supporting Trump it’s like ok he does have many other things that he is trying to implement. But he has also talked badly to women. He has also been racist in the case of the judge. Even in his apology that he put out he didn’t even focus on the apology. He focused on Bill Clinton and Hillary Clinton.

NOOR: Trump apologized for his comments in the debate and said they were quote “locker room talk”.

TRUMP: I’m very embarrassed by it. I hate it. But it’s locker room talk.

ROBINSON: Which locker room is he referring to? I mean if I was an athlete I’d be completely offended by a comment like that. I think that is a cowardly way of trying to justify having that kind of attitude and often times it’s not what a person says when the camera is in front of them, it’s what they say when the don’t think anyone’s listening.

TRUMP: But I have tremendous respect for women.

ANDERSON COOPER: Have you ever done those things.

TRUMP: Women have respect for me. And I will tell you no, I have not.

HORNE: There are women who have contradicted that assertion. Including a long piece in today’s, Sunday’s New York Times in the column of Nicolas Kristoff. Actually the New York Times had a number of pieces today citing women who say that they were assaulted by Donald J. Trump.

NOOR: Clinton has had her own issues to face. WikiLeaks on Friday published an email from Clinton advisers appearing to contain excerpts of paid speeches to corporations, in which Clinton voices support for open trade and borders and says how sometimes it is important to have a public and private position.

PRYSNER: Her speeches to Goldman Sachs in which she said that she has to have a public policy and a private policy, meaning that what she says publicly doesn’t necessarily mean what she means and says to her Wall Street donors. Also in those WikiLeaks documents it came out that she is called an anti-fracking activist. Fracking of course being one of these things devastating the environment. She said it was like a Russian conspiracy. So both candidates of course on the same path of destroying the Earth, much of the life on Earth. Yet they would rather ask questions about using this precious time in the debate as the moderators kept proding people to remember. They’d rather use it for questions about the candidates saying one nice thing about each other. Things like that.

NOOR: Clinton and Trump also clashed over foreign policy, with Trump publicly breaking with his running mate, Mike Pence, on how to deal with the civil war in Syria.

RADDATZ: You use military force to strike the military targets of the Assad regime.

RADDATZ: You disagree with your running mate?

TRUMP: We have to knock out ISIS. Right now Syria is fighting ISIS. We have people that want to fight both at the same time. But Syria’s no longer Syria. Syria’s Russia and its Iran who she made strong, and Kerry and Obama made into a very powerful nation and very rich nation very, very quickly. I believe we have to get ISIS.

NOOR: This is Iraq War Veteran and journalist Mike Prysner.

PRYSNER: Trump revealed that his plan to knock out ISIS, whatever that means. We can only assume he means a massive escalation of war in the Middle East. You know he’s saying that the Obama administration has completely failed to knock out ISIS and so he doesn’t say exactly what he means but we can only take that as him meaning that he wants and escalation of war in the Middle East which of course will be disastrous for people in the United States and of course the people in those countries are going to be attacked. But more important I think for the discussion is Hillary Clinton’s insistence on a no fly zone in Syria. One of the other things is Hillary Clinton’s leaks is that she’s admitted that a no fly zone would require more US boots on the ground in Syria. In the debate she says she doesn’t want any combat troops in Syria but she wants US special forces troops in Syria.

CLINTON: I would not use American ground forces in Syria. I think that would be a very serious mistake. I don’t think American troops should be holding territory, which is what they would have to do as an occupying force. I don’t think that is a smart strategy. I do think the use of special forces which we’re using, the use of enablers and trainers in Iraq which has had some positive effects are very much in our interests. So I do support what is happening.

PRYSNER: No question from the moderator comes asking what a no fly zone really means. You know the American public, they hear oh well there’s people dying in Allepo, no real context of the situation in Allepo but that a no fly zone is some humanitarian thing that’s going to save lives. People don’t know what a no fly zone really means. The first act in no fly zone is not just blowing up anything that is flying in the sky that’s not US or US approved. But the first act to enact a no fly zone is bombing every Syrian government anti-aircraft site also. So it would begin, Hillary’s no fly zone will begin with a massive bombardment with the Syrian military all throughout the entire country. That also meaning very likely a massive bombardment of Russian military forces, Russian air forces in the country. We know that Iran is very involved in Syria as well. So what Hillary is actually saying is something that as even the generals will admit, can trigger a world war potentially or at the very least, war with a nuclear power.

NOOR: If this year has taught us anything, Gerald Horne argues, it’s to not discount a candidate like Trump.

HORNE: It’s not only the United States but the polls were long in Brexit, the British exit from the European Union, the referendum of June 2016 with the pollster suggesting that it would be soundly and roundly defeated and actually it passed 52 to 48. The pollsters were wrong about the referendum in Colombia on the peace accord between the armed resistance and the Borgata administration. It was supposed to be roundly and soundly passed. But it failed, albeit by a razor thin margin. It’s highly possibly that people who are being polled are embarrassed about saying they support Donald J. Trump. Not least because there’s so much ruling elite press resentment against him. So it would not surprise me at all if the pollsters were wrong again in putting Hillary Rodham Clinton comfortably ahead in this presidential race.

NOOR: Go to the RealNews.com Monday for full coverage and analysis of the debate. This is Jaisal Noor.

Mike Prysner is an Iraq war veteran. He is also the producer of The Empire Files with Abby Martin.