The National Guard was called in after a second night of unrest following the killing of Keith Scott, who protestors believe was unarmed at the time of his shooting by a police officer

The National Guard was called in after a second night of unrest following the killing of Keith Scott, who protestors believe was unarmed at the time of his shooting by a police officer 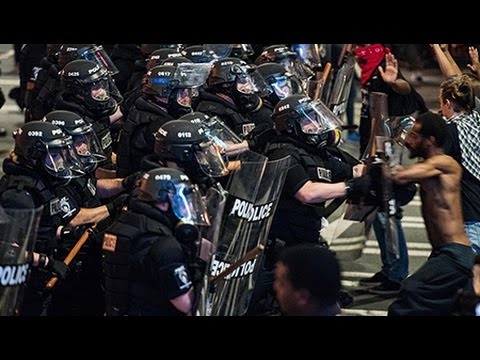 JAISAL NOOR, TRNN: Protests against the killing of another black man at the hands of police have escalated in Charlotte as the city continues to refuse to release the footage of the incident and witnesses dispute the police account of the shooting of Keith Scott. This has prompted the declaration of a state of emergency and the mayor has said she’s considering implementing a curfew as protests showed no sign of abating.

On Thursday the Charlotte police chief conceded the recording of the incident does not prove Scott was pointing a gun, continuing to refuse to release video of the shooting to the public. He did say he will share it with Scott’s family.

SPEAKER: My feeling is that enough is enough. It’s gone too far. The cops in America are way too aggressive. They pick on the little people, you know. America’s about power. But power should be equal. No one race should dominate another race.

NOOR: A peaceful rally in response to the shooting turned violent on Wednesday as Officers fired rubber bullets, tear gas, flash-bang grenades and used pepper spray to disperse the crowd. Some protesters threw rocks and bottles at police in riot gear, smashed windows and doors in downtown Charlotte.

According to police, Keith Scott, 43, was shot and killed by officers on Tuesday after he refused to drop a handgun. His family and a witness to the shooting said Scott was holding a book, not a firearm.

One protester was shot and gravely wounded by a civilian, and four police officers suffered non-life threatening injuries, city officials said on Twitter. Police had originally reported the individual had been killed but later backtracked.

The policeman, now identified as Brentley Vinson also African-American, has been suspended of his duty. local authorities said that the investigation into the case is to follow.

SPEAKER: Too often we find now that there’s been some fabrication. That there’s been some incidents that were not quite factual. So I’m very concerned when things don’t seem to line up. That doesn’t mean that it’s not true. I just need someone to prove it to me. And I think that we have been too quick make statements that as I said before, demonize Mr. Scott.

NOOR: On Wednesday an additional witness came forward to dispute the police account of the shooting and activists called for a boycott of Charlotte.

TAHESHIA WILLIAMS: He’s standing there like this, telling them ‘I don’t have anything.’ When they did that, you hear four shots. Boom. boom. boom. boom boom. That man hit the ground and then they just stand there looking at him. I got it on video.

B.J. MURPHY: Our black manhood and our black people, who are being gunned down in the street. We don’t get no justice. So what I’m calling for and what we’re calling for is an economic boycott of the whole city of Charlotte. Since black lives do not matter for this city, then our black dollars shouldn’t matter.

NOOR: The turmoil prompted Governor Pat McCrory to declare a state of emergency and deploy the National Guard and highway patrol officers to the city to help restore peace.

Charlotte is a deeply segregated city and the African American community has long demanded police accountability. Those calls were highlighted in 2013 when a white office shot and killed 24-year-old Jonathan Farrell. There were no convictions in that case but the city settled a wrongful death lawsuit for $2.25 million dollars

There have also been protests in Tulsa, Oklahoma, in recent days demanding the arrest of a police officer seen in a video last week fatally shooting an unarmed black man who had his hands in clear view at the time.

For the Real News, this is Jaisal Noor.