The Real News brings the latest on the police killings of Keith Scott in Charlotte, North Carolina, and Terrance Crutcher in Tulsa, Oklahoma, which took place 95 years after the Tulsa Race Riots

The Real News brings the latest on the police killings of Keith Scott in Charlotte, North Carolina, and Terrance Crutcher in Tulsa, Oklahoma, which took place 95 years after the Tulsa Race Riots 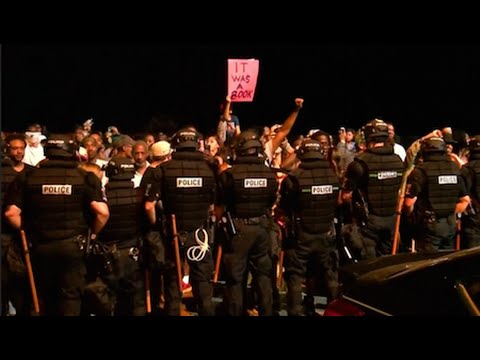 JAISAL NOOR, TRNN: African-American activists and community members gathered in Charlotte, North Carolina on Wednesday to express anger at the police shooting of Keith Scott that spurred mass protests the night before, with some calling for an economic boycott. Meanwhile a witness has come forward saying the 43-year old was shot despite complying with police orders, as the city’s mayor called for calm and peace following the overnight violence.

TAHESHIA WILLIAMS: He’s standing there like this, telling them ‘I don’t have anything.’ When they did that, you hear four shots. Boom. boom. boom. boom boom. That man hit the ground and then they just stand there looking at him. I got it on video. I got it on the phone.

KERR PUTNEY: I can tell you a weapon was seized, a handgun. I can also tell you we did not find a book that has been made reference to.

NOOR: This comes just days after unarmed black man Terence Crutcher was shot dead by Tulsa Oklahoma police despite having his hands up. That shooting was captured on video and has elicited a very different response from authorities. Meanwhile protesters rallied in Tulsa on Wednesday after the city council abruptly canceled a meeting on the creation of an African American commission, a key demand of the protest. More on the Crutcher shooting later in this story.

During a news conference Wednesday, one Nation of Islam activist urged an economic boycott of Charlotte as protest to the latest in a series of police shootings over two years that inspired the Black Lives Matter movement.

B.J. MURPHY: Our black manhood and our black people, who are being gunned down in the street. We don’t get no justice. So what I’m calling for and what we’re calling for is an economic boycott of the whole city of Charlotte. Since black lives do not matter for this city, then our black dollars shouldn’t matter. Keep our money in our pocket and let you feel see–we are watching a modern day lynching on social media, on television. It is affecting the psyche of black people. That’s what you saw last night.

NOOR: A pastor from Kalamazoo, Michigan also called for a “mass exodus” of worshippers from both black and Caucasian churches that he said had failed to take an appropriate stand against police brutality.

About a dozen officers and a handful of protestors were hurt during demonstrations that lasted for hours on Tuesday night. The chaos erupted after police shot dead Keith Lamont Scott, a black man authorities say had a gun when they approached him in a parking lot.

But relatives maintain he was unarmed and reading a book inside his car, waiting for his son to be dropped off from school. This is the victim’s sister.

NOOR: Police say the shooting happened as officers at this apartment complex were looking for a suspect with an outstanding warrant. They say officers saw Scott get out of his car with a gun. He was not the man police were looking for. His death is the latest in a string of police shootings involving black men that have sparked protests nationwide. According to the Guardian’s the Counted, Keith Scott was the 787th person police have killed this year. Another yet unidentified person has been killed since in Connecticut.

Meanwhile A criminal investigation into a police officer in Oklahoma who shot and killed an unarmed black man seen on video with his hands in the air was underway, authorities said on Tuesday.

Officer Betty Shelby shot Terence Crutcher, 40, after his sport utility vehicle broke down on Friday. A lawyer for the officer told media outlets that Shelby fired her weapon after Crutcher failed to comply with commands.

Crutcher’s family called the shooting a criminal act and is seeking charges. The Justice Department has launched a separate civil rights investigation about the use of force by officers.

SPEAKER: They weren’t in danger. As Attorney Solomon Simmons said, it was daylight. They had multiple officers out there. He was not accused of any crime and for the life of us we don’t know why the helicopter police officer thought that he was a big bad dude when they didn’t know anything about him.

NOOR: 2016 marks 95 years since the destruction of Black Wall Street when mobs of whites and police attacked the Greenwood section of North Tulsa and 300 black people were killed. Black Wall Street was the economic and cultural center in the African American community in highly segregated Tulsa and a short distance from where Terence Crutcher was shot by officer Betty Shelby.

With Kim Brown, this is Jaisal Noor.