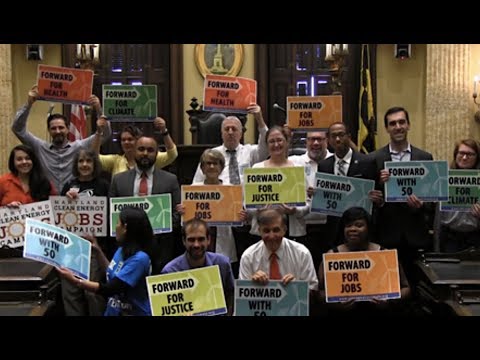 Jaisal Noor: On Monday, Baltimore City council members endorsed a clean job and energy plan they say will help transform and uplift Baltimore and save the planet from climate change. Under the proposal, at least 50% of Maryland’s energy will come from renewable sources like wind and solar by 2030.

Mary Pat Clarke: “I hope tonight with our votes to roundly support the efforts underway, which are going to dramatically increase the renewal energy goals in Maryland and combine that with job training and targeting to hire the forgotten people of our state to be the workers in this new clean energy industry.”

Jaisal Noor: I asked why the renewable energy goals are less ambitious than what many are calling for.

This year delegate Shane Robinson is introducing legislation that would call for 100% renewables by 2035 and the U.S. Conference of Mayors adopted a resolution unanimously that calls for 100% renewables by 2035 so some people are asking why the city council is supporting this measure, which is less ambitious, calling for 50%. In the face of the urgency of reacting to climate change, 50% versus 100% is a very different goal.

Mary Pat Clarke: Well you’re right. Couple things: First of all, I know Vinny DeMarco and the way he runs campaigns. I think we’ll get our 50% as long as we support him. I think that’s an achievable goal in this general assembly to get. Of course, we would like 100% renewable energy and do not … You know, that’s great and support that.

Jaisal Noor: The less ambitious plan was introduced by a coalition of faith and community leaders last week.

Omar: “I’m an example of renewable energy saving lives and creating a job because the job that it created for me helped save my life as well as provide a good life for my family and those that I care about. I’m very happy to see that this effort is being initiated and actually being pushed to the extent that it is because I have friends in my surroundings here in Baltimore that are very interested in the solar industry, however there’s not enough jobs here in Baltimore that’s accessible to them.”

Jaisal Noor: Climate scientists say it may already be too late to fully mitigate the impacts of climate change. With the Trump administration indicating it may likely pull out of the Paris Climate Accords and greatly expand fossil fuel extraction in the United States, an increasing number of states are calling for more renewable energy. In August, progressive elected officials announced an introduction of a bill that did seek 100% renewable energy in the state by 2035.

Shane Robinson: “Us alone as a state in Maryland getting to 100% renewable energy is not going to get us out of this crisis. Climate change will still happen. We’re only six million people, a drop in a bucket in a country of over 300 million and a world with over seven billion people. So what we do within these borders isn’t going to create a big change on its own, but what it’ll do is create a model for other states to be able to follow.”

Jaisal Noor: I asked the coalition why their proposal sets a less ambitious target than that of delegate Shane Robinson.

Karla Raettig: As I said, the Maryland Climate Coalition supports 100% renewable future. We’re working with the delegate to discuss the pathway to get there. So, right now we think 50% is a really solid effective step on that path. We just have different approaches right now, but we all have the same goal and we’re working together to bring renewable energy to Maryland.

Jaisal Noor: I got a response from Rianna Eckel of Food and Water Watch.

Rianna Eckel: First off, I want to thank Councilwoman Clarke for her leadership and for taking on climate change. It really is one of the most urgent issue that we are facing right now. Food and Water Watch’s response is that what’s politically feasible is what needs to happen. We need to get off fossil fuels. We need to get on to renewable energy and we know that we need to do that by 2035, have a 100% clean energy economy, be off fossil fuels in every sense of the term in order to avoid the worst impacts of climate change. When we talk about what’s politically feasible, I don’t think that that is really valid when we’re talking about literally the sake of our lives.

The intergovernmental panel on climate change has said that in order to avoid catastrophic, runaway climate change, we need to stay below 1.5 Celsius degree warming from pre-industrial levels. Right now, we’re at about 1 degree Celsius above pre-industrial levels, which means we only have .5 degrees until we hit these ecological tipping points where then we’re dealing with runaway climate change and we’re dealing with positive feedback loops that can’t be stopped. So talking about the oceans warming so much that the currents actually stop. Glaciers melting completely until they’re gone. We’re talking about increasingly catastrophic storms that are going to completely devastate our communities, so it’s incredibly urgent that we get … stay below 1.5 degrees warming and there’s science to show that in order to stay below that threshold we need to have 100% clean energy at the absolute latest by 2035. Anything sooner is definitely preferable, but that’s that last point where we can still salvage our planet and stay within safe levels and make sure that things like Harvey and Irma aren’t continuing to happen and continuing to devastate communities in an even more horrific way.

Jaisal Noor: For continued coverage of these efforts keep your eyes on TheRealNews.com. This is Jaisal Noor.