Across the country thousands protested, walked out of school and carried out civil disobedience against the decision

Across the country thousands protested, walked out of school and carried out civil disobedience against the decision 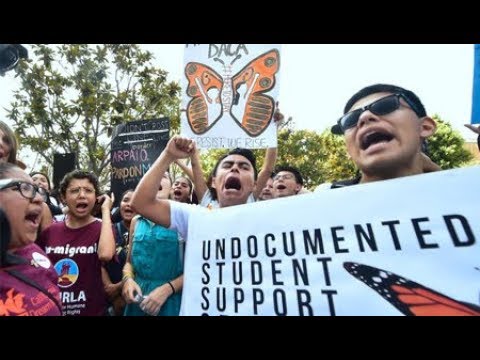 Jaisal Noor: In breaking news, Attorney General Jeff Sessions announced the end of DACA, an Obama administration program that protected children of undocumented immigrants, or Dreamers, from deportation and allowed them to work legally.

Jeff Sessions: To have a lawful system of immigration that serves the national interest, we cannot admit everyone who would like to come here. It’s just that simple.

Erika Andiola: We’re fed up. We’re fed up with everything. We’ll attack the [inaudible 00:00:45]. We’re just so tired of it and if this is … This is how we want DACA. We want DACA by showing that we’re undocumented, that we’re unafraid, and we’re sitting here, all DACA recipients, to show Trump that we’re not going to be afraid of him.

Jaisal Noor: Nearly 800,000 people have taken part in DACA, which is now being phased out over the next six months.

Jeff Sessions: Enforcing the law saves lives, protects communities and taxpayers, and prevents human suffering. Failure to enforce the laws in the past has put our nation at risk of crime, violence, and terrorism.

Jaisal Noor: Trump is asking a deeply divided Congress to replace it. Congress has been unable to pass any of the administration’s initiatives thus far. The Trump administration has scapegoated immigrants since the campaign. Sessions did not take questions during the press conference. He’s been called the most anti-immigrant senator on Capitol Hill. It’s unclear what will happen to the nearly 800,000 people enrolled in DACA, whose names and addresses are registered with the government. At least one DACA recipient was detained by ICE. He was released six weeks later.

“The goal of Trump’s anti-immigrant programs are to feed working class white nationalism and racism, and to divide the working classes,” says historian Gerald Horne.

Jaisal Noor: For more, go to therealnews.com. This is Jaisal Noor.