TRNN Replay: As more NFL players join Colin Kaepernick's protest, we replay a story a story examining the racist history of the national anthem and its author

TRNN Replay: As more NFL players join Colin Kaepernick's protest, we replay a story a story examining the racist history of the national anthem and its author 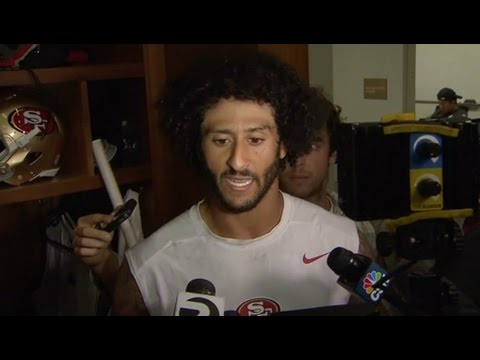 JAISAL NOOR, TRNN: NFL quarterback Colin Kaepernick has made headlines and unleashed a social media firestorm for saying he’ll continue to sit when the U.S. national anthem is played before San Francisco 49ers games to draw attention to issues of police brutality and systemic racism.

NOOR: Many have gone to Facebook to launch racist attacks at Kaepernick. The 49ers, who have been unsuccessful in trying to trade Kaepernick to another team have been supportive of his right to protest.

KAEPERNICK: “The fact that it has blown up like this, I think it’s a good thing. It brings awareness. Everybody knows what’s going on and this sheds more light on it. Now I think people are really talking about it, having conversations about how to make change, what’s really going on in this country and we can move forward.”

NOOR: Less attention has been paid to the- history national anthem, the Star Spangled Banner, or its writer Francis Scott Key

Former Black Panther Eddie Conway, served 44 years for supposedly killing a police officer and is an executive producer for The Real News network

EDDIE CONWAY: He spent most of his life defending slave-owners, white supremacy. He spent a lot of his time prosecuting abolitionists, fighting against people that were trying to get freedom for black people.

NOOR: Another lesser-known aspect of the national anthem is that it originally contained a verse that called for the targeting of enslaved African Americans, many of whom had fought on the side of the British after they were promised their freedom.

GERALD HORNE: Only the naive should be surprised that enslaved peoples, people enslaved by slave-owners who were in a war, would not necessarily support their slave-owners.  Unfortunately, today what historians and many others who may be deemed to be naive seek to do is fit the enslaved into a seamless narrative that at once eviscerates their rebelliousness and makes them seem like any other U.S. national.

KAEPERNICK: I think it’s something that can unify this team. It’s something that can unify this country. You know if we have these real conversations that are uncomfortable for a lot of people. If we have these conversations there’s a better understanding of where both sides are coming from. And if we reach common ground and can understand what everybody’s going through, we can really affect change and make sure everybody’s treated equally and has the same freedom.

NFL’s Racism Runs Deep, All the Way to the Super Bowl

November 25, 2019
Sign Up for Our Newsletter
Help Us Make Real News!