The Real News reports from North Dakota where despite growing repression, water protectors reclaimed tribal territory as part of the growing resistance to the Dakota Access Pipeline. Lauretta Prevost with Mirrors and Hammers Productions,www.mirrorsandhammers.com,

The Real News reports from North Dakota where despite growing repression, water protectors reclaimed tribal territory as part of the growing resistance to the Dakota Access Pipeline. Lauretta Prevost with Mirrors and Hammers Productions,www.mirrorsandhammers.com, 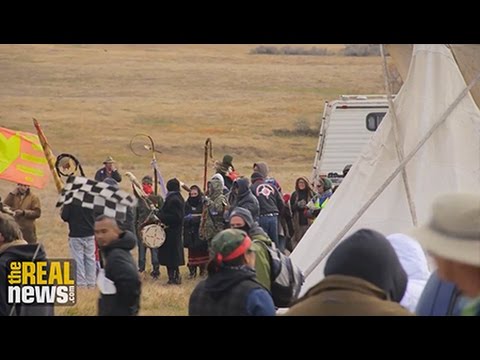 JAISAL NOOR, TRNN: Over the weekend over 100 water protectors and journalists were arrested as part of the resistance to the 3.8 billion dollar Dakota Access Pipeline. Despite the growing repression, water protectors took a bold step. They announced they were reclaiming unseeded land, currently considered ‘privately property’ directly on the planned path of the 1,100-mile pipeline.

SPEAKER: Right now we claimed imminent domain to stop the pipeline. We’re right in their path on Native land. We’ve already got the paperwork filed. The police have come and DAPL security has come to try and stop us and remove us, so we all came back together again to again claim imminent domain just like they’ve done to us.

NOOR: A camp consisting of teepees and tents was built. Authorities swept in and arrested several water protectors and sped off.

SPEAKER: There was 3 people walking along the left side of the fence over there. We saw them. We started yelling at them to run. They ran over, got over to the other side of the fence. When the ATVs with the DAPL security got to the fence, they stopped for a moment. Our people were still running. They were trying to get back to everybody else. The ATVs decided to cross it, go over, knock down the 3 people and then they were pushed back by a line.

NOOR: A drone controlled by the water protectors revealed authorities were amassing behind a hill and many retreated. A drone was also shot down by private security forces.

SPEAKER: With a sniper. The drone was 400 feet above and they just shot it down with the sniper.

SPEAKER: Is that a felony?

SPEAKER: That is a felony to shoot down a drone. The drone was on tribal land. It was way above, away from it.

SPEAKER: And live ammunition could ricochet. It could hit somebody.

NOOR: But those gathered stood steadfast and hoped more would join the new encampment.

SPEAKER: They want to winter camp here and whoever can come, can come.

SPEAKER: Do they want all 3 camps to come together?

SPEAKER: The more unity, the more better. We’re also sending out the call for more people to come and join us. Come and help us. Remember why we’re here and don’t let anybody forget us.

SPEAKER: Why are we here?

NOOR: With Mirrors and Hammers Productions, this is Jaisal Noor for the Real News.

Police Use Your Money to Buy Silence from Brutality Victims