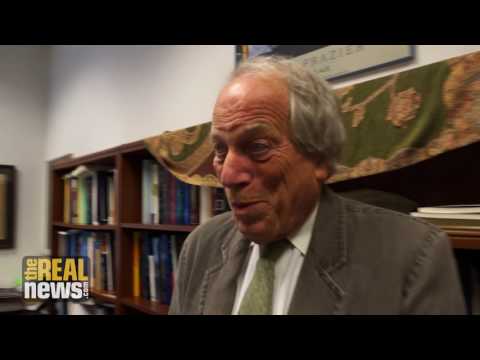 JAISAL NOOR, TRNN: Another example of inequity in the country’s justice system, which after decades of advocacy has finally caught the attention of the justice department: cash bail, a system of forcing indigent defendants to put up money in exchange for pre-trial freedom. The government says it routinely violates the constitutional right of the people forced to pay it. The DOJ is weighing in as a result of the case of Maurice Walker, a resident of Calhoun, Georgia who was held in jail for six days because he couldn’t afford $160 bail. [To sort out] the implications of what this means, and if it will truly effect change in an entrenched system, we’re talking to University of Maryland law professor Doug Colbert, who is also a longtime advocate of reform of this pre-trial detention system.

Thanks so much for joining us, Doug.

NOOR: So I wanted to start off by getting your response to what the city of Calhoun, Georgia, the state’s sheriff’s association, and a lobby group for bail bondsmen said. MSNBC quotes a system of unsecured recognizance bonds greatly reduces the incentive for defendants to appear. It thus simply cannot be any defendant arrested for any crime must be immediately released based on a bare assertion of indigence.

So basically what they’re saying is you can’t trust poor people to show up for court. There has to be some type of incentive. How do you respond to those kind of arguments?

COLBERT: Well, the bail bond business is a very lucrative industry in our country, and people do not want to spend time in jail before trial, before they’ve been found guilty. So people, even the poorest, the lowest-income working person is going to do his and her best to pay the bondsmen’s 10 percent non-refundable fee. It’s a very big moneymaker in terms of the amount of money that’s collected by bondsmen.

COLBERT: And I think throughout the country it’s much bigger than that, even. Because the idea is, I think what you have to ask yourself is, why should freedom depend on how much money a person has? Obviously the people who have the money are very much advantaged, and the people who are working and making enough to pay their rent and feed their kids. They don’t have any extra money to give away in order to get someone out of jail.

So they’re at a big disadvantage–poor people, of course. Many of whom–and homeless–many of whom are veterans and people who serve this country. They have no chance of making bail at all.

NOOR: So the counterargument, the supporters of bail, would say this is how you keep people from committing those crimes again, and it’s a way to keep dangerous people behind bars. How do you respond to those kind of arguments?

COLBERT: Well, if the idea is that people won’t commit crime when they’re in jail, then I suppose that’s a good argument for incarcerating everyone. You know, I don’t think we really want to do that.

So what the bondsmen are doing are they’re defending the profitmaking system and the power they have. Bondsmen have more power than police officers do. They can enter our home whenever they want. They can arrest us. If I don’t like the way you’re looking at me right now I have the power to put you right back in jail. It’s an archaic system, the system that really grew out of our 200 years of slavery, where we valued people owning property in other human beings.

So what we’re looking at now is a system where the only people who should remain in jail before trial are the people who must be there either because they can be shown to be a significant danger to other people if they’re let out of jail, or if they’re a significant risk of flight, of leaving, of not coming back, of not appearing in court. And in those two situations there’s probably a very small group, in most jurisdictions it’ll be about 10-15 percent of people who are arrested, who must be denied bail. But the other 85-90 percent, they should not be held in jail for long periods simply because they don’t have the money.

NOOR: And what’s the significance of the Department of Justice weighing in on this? It’s the first time, from my understanding, they have made this argument that it’s unconstitutional to do this to poor people in a federal hearing, in a written federal brief.

COLBERT: It’s a huge step towards eliminating money bail or replacing it with an objective risk assessment that will tell us who is more likely not to return to court, who’s more likely to commit a crime. Money has no relation to public safety. You know, you can be charged with a very serious, a severe assault, against a member of your family, and if you’ve got the money to get out of jail you pay it, and then you go right back to the same person, and maybe inflict another beating or worse.

So in terms of public safety, money is shown to have no nexus, no connection, to keeping people safe.

NOOR: And will this move by the federal government in this one instance, do you think that’s going to translate into larger policy shifts? And what could the potential impact of that be on cities like Baltimore, where hundreds if not thousands of people remain locked up every night in the city because they’re unable to pay a cash bail, which is–and also talk about how that’s established, because from my understanding it’s up to the discretion of a judge or another entity. And like you were saying, there’s no sort of objective basis for how that’s set.

COLBERT: So it’s a huge step that the Justice Department has filed an amicus brief arguing that poor and low-income people’s equal protection is being violated. You see, when we talk about equal protection we’re saying that people who are similarly situated, who face the same consequences, they should be treated the same. They shouldn’t be discriminated against so that you’re favoring people who have wealth and disfavoring people who are struggling and who are poor. For the Justice Department of the United States to step in and say this system is fraudulent, it’s rigged, it’s manipulative, it discriminates, that’s a big step towards places like Baltimore, like our own state of Maryland, of saying we can do a system that’s much fairer and that protects the community.

NOOR: And so talk about what the potential impact could be for indigent people in this city how could that help their, you know, help them just in their daily lives? Because right now if you’re locked up for weeks, days or weeks at a time, there’s a good chance you’re going to be losing your job, you’re going to have serious–you could have serious problems with your family, a whole other host of problems that could come up if you lose your freedom, before your trial even happens.

COLBERT: The impact on families and on communities generally is huge, because the family loses a breadwinner, a caretaker, loses somebody who they depend upon. And just think, even for a relatively low bail, a $5,000 bond, the bail bondsman collects $500. It’s non-refundable. So you’re giving away $500. If you take somebody who’s earning $9-$10 in an hour, and if you know that their takehome every week is about $250, so on a monthly they’re getting $1000 that they’re earning. They’re paying $500 of it to a bondsman. Where’s the rent money going to come from? Where’s the food budget? Where are the utilities?

So eventually people can lose their homes. They’re going to be put out on the street. And of course, the kids are never going to get the nourishment that they need. So in the long run we’re really supporting a very selfish industry, one that’s quite antiquated and one that should really be replaced.

NOOR: And they’re certainly going to be putting up a fight as this moves forward. So we’ll stay updated with you and on this story, Doug.

COLBERT: Yeah, the bondsmen are one of the most powerful lobbying groups in our state legislature, and there’s already been two commissions that have called for the end of money bail, the bondsmen. But that bill has not even seen the light of day because of the extraordinary power of bondsmen and their legislative supporters.