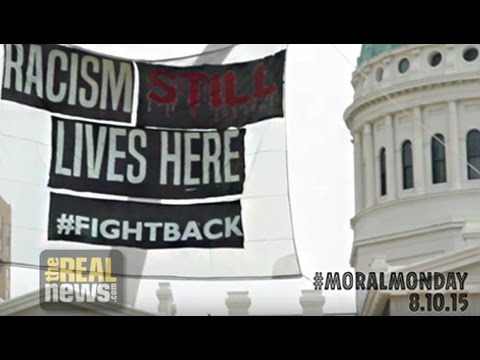 JAISAL NOOR, PRODUCER, TRNN: Missouri to cover the protests that have erupted here in the wake of the one year anniversary of the killing of unarmed teenager Michael Brown by white police officer Darren Wilson. Protests have occurred across the region, including one of them which happened at the old courthouse in St. Louis. It’s the site of the Dred Scott decision some 160 years ago today, which found that Dred Scott, an African-American person was not in fact a person, he was property, and therefore could not sue for his freedom.

Now we’re joined by two of the participants in that process. We’re joined by QuIntin Savage and Elizabeth Vega. We’ll start with you, QuIntin. You’re not from Ferguson but you traveled here to take part in this protest. Tell us why you came here for the one year anniversary of the killing of Mike Brown and what this protest symbolized for you.

QUINTIN SAVAGE: Sure. I’ll start by saying that there’s a whole lot of talent that’s already here in St. Louis and in Ferguson. They definitely didn’t need me. I came down to get educated. Because I definitely feel like the movement for all black lives is happening all over the world, really. And I feel like the tactics need to escalate. So I wanted to get an education on direct action, and I got that.

NOOR: And what does it mean to you, personally? You’re obviously an African-American man, and this movement of Black Lives Matters really exploded all over the country after the killing of Michael Brown a year ago.

NOOR: Elizabeth, we spoke to you last year at the site of where Michael Brown was gunned down by Darren Wilson. Start off by telling us about this action and what it meant to you, and the message you are trying to send, that racism still lives here in St. Louis, in Ferguson, and we’ll start from there.

ELIZABETH VEGA: I think this action was an accumulation of a year of protesting. Just because the media hasn’t been here covering the protest, that doesn’t mean that we have not been protesting. This protest has been going on for a year, and almost every single day there is something protest related. I’ve been arrested eight times, had my car towed. Had my bike stolen. People are very invested in this movement.

So this action was a way for us to bring in an organization, Ruckus, which does very creative direct action, and bring some of the training that is in Oakland and New York here to the Midwest. And it was a way, it was something that we had been wanting to do for quite some time, because the arch and the old courthouse have such symbolism. And so we felt like we needed to sort of show how we really feel about that Missouri is the gateway to the West, we think it’s a gateway to oppression at this point. We think that even though the Dred Scott case, that that racism from that case still exists not only here in St. Louis but is in the very fabric of our society, and we see that in the police brutality that is impacting the lives of people of color in this country.

NOOR: And so Quintin, it’s been one year of Black Lives Matter. It started in Ferguson, it’s taken hold all across the country now. What do you think it’s accomplished? And talk about the challenges that remain.

SAVAGE: I definitely think we have more black people who are activated and are conscious, and really want to get involved. And that’s amazing, because we have these opportunities to build when we come together for anniversaries, or the convening in Cleveland, things like that.

NOOR: And Elizabeth, a lot of people we talked to, or just about everyone we talked to in Ferguson earlier today after we arrived, they don’t really see anything as having changed in their daily lives as residents of Ferguson. What’s your take on what’s changed and the work that remains?

VEGA: I mean, I think that it’s not, this movement is going to be measured in years, not days. I think we’re just in the beginning. A year in, we’re just in the beginning of what’s going to prove to be a very large movement. The reality is is that the people in Ferguson and the people in St. Louis and the people in California, the lives of people of color, their lives have not changed substantially because of this movement, which is to say that there is much more work to be done in terms of the system.

But I think that in terms of change and conversation, and I think the most significant thing that’s happened is that we have very real and solid relationships that have been formed between people who are committed to social justice, committed to activism, committed to seeing this system not only change but transform. Because right now, change is too little, too late. We want an absolute transformation of the systems that have been oppressing us. So I think it’s holding both of those things in equal hands. We’re having this conversation, we’ve been having this conversation for a year. All on our Facebook feeds and statuses there’s discussions about race, class, and privilege. There’s discussions about police brutality. That would not have happened without the Ferguson movement.

So it’s creating, having impact while still working for transformation. That takes time, and we’re in it for the long haul. I think one of the things that’s happened is, people like myself who got, really, really, had the veil lifted and got activated on August 9 are now totally changing our lives to accommodate this mission and purpose that we feel in our hearts.

NOOR: All right, I want to thank you both for joining us. Quentin Savage and Elizabeth Vega. Thank you so much.