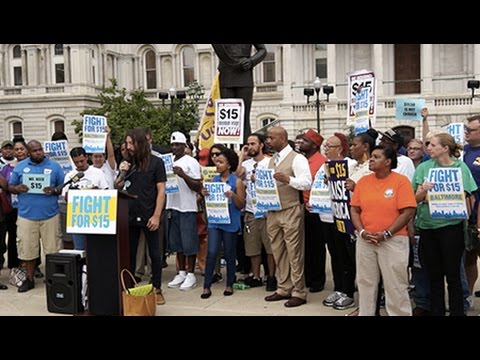 KIM BROWN: And with that, the Fight for $15 in Baltimore lives to see another day. A proposal to increase the minimum wage will face a vote next Monday in the Baltimore city council, and this bill will include an amendment exempting small businesses with 25 or fewer employees, business with a half a million in revenue and less, and a delay in implementing the $15/hr wage from the year 2020 to the year 2022. Another amendment reducing the minimum wage increase to $11.50/hr was defeated. Councilwoman Mary Pat Clarke, lead sponsor of the wage hike proposal, discussed why she agreed to exempt small businesses.

MARY PAT CLARKE: As a result, we are not only sacrificing the effects of this bill, we are not helping thousands of works who we should. But we are not so that the small businesses where they work and make their living will not be in jeopardy.

BROWN: Prior to the hearing advocates rallied outside of City Hall, including small business owner and SCIU official Alethea McCaskill who called on business owners to look beyond their immediate short term interests and do what’s best for the people of the city.

BROWN: Despite the bill advancing, it remains uncertain if it will gain final approval next week. Councilmen Eric Costello who cosponsored the bill and who supports the idea of raising the minimum wage, abstained from voting over possible impacts the bill could have over small business owners.

ERIC COSTELLO: This bill is going to have dire consequences for the small business community in Baltimore City and their ability to continue to employ Baltimore City residents.

DAVID COOPER: The claims this is going to lead to businesses moving outside of Baltimore, choosing not to locate inside of Baltimore are just totally overblown. I mean every city that has enacted a higher minimum wages than its state minimum wage, we’ve never seen these claims materialize. And part of the reason for this is exactly what I was saying a minute ago was that businesses choose to locate based upon where the consumer is. Particularly these retail and accommodating [inaud.] and food service businesses. They want to go where people have money to spend and if that’s inside Baltimore City, they’re going to locate inside Baltimore City.

BROWN: I’m Kim Brown. Stay tuned to the Real News for our ongoing coverage of the Fight for $15 in Baltimore.