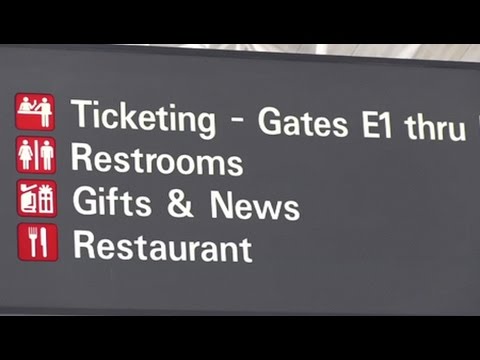 Workers and advocates have gathered here today to speak out on what they say is systemic discrimination against African-American workers here, who get paid less and get worse jobs than their white counterparts.

NATALIE HICKMAN, MCDONALD’S CASHIER, BWI AIRPORT: I’ve been working here three years, and I still make $8 hour, which I was promised to a raise every six months. But no, still make $8 an hour.

JEREMY POLLARD, SERVER AT VINO VOLO, BWI AIRPORT: I’ve worked at BWI Airport for a year and a half now. I make $6 an hour flat wage. And we make tips, and we pool our tips at my restaurant. So I can tell you that our tips average about $20 an hour.

NOOR: The Real News repeatedly reached out to the publicly controlled BWI Airport and AirMall, the private company that manages its concessions, with no response.

ROXIE HERBEKIAN, PRESIDENT, UNITE HERE LOCAL 7: We’re calling this report a missed opportunity, because since this airport is owned by the state of Maryland, the airport could be a place where inequality is being whittled away, not encouraged.

GERALD STANSBURY, PRESIDENT, MARYLAND STATE CONFERENCE OF THE NAACP: Fast food workers are among our largest group of minimum-wage workers, with workers of color disproportionately represented and especially concentrated in the lowest-paying jobs, where only 10 percent of workers hold management positions, compared with almost half of the white men who work in fast food industry, further perpetrating the racial wage gap.

HERBEKIAN: Eighty-three percent of the workers in the food and retail concession program are African-American. In the highest-paying jobs, the front of the house, bartender, and servers jobs, less than 40 percent are filled by African Americans. In fact, our study showed 38 percent.

This is of grave consequence to our state, but particularly to the City of Baltimore. The vast majority of the workers at the airport live in Baltimore City, where the inequality gap is, unfortunately, quite large.

NOOR: The stories of African-American workers like Natalie Hickman, who makes just $8 an hour, contrast sharply with those of their white counterparts, like Jeremy Pollard, who makes an average of $26 an hour with tips.

POLLARD: I work in a restaurant with with nine other workers, and none of my coworkers are African-American, despite the fact that I’m born and raised in Baltimore, which is a city that’s about 70 percent African-American.

NOOR: And there are lots of African-American workers at the BWI.

NOOR: And so how do you feel about that, the fact that–I mean, what you’re implying is that because of the color of your skin, you’re making more money than people that have a different skin.

POLLARD: I’m actually kind of not implying it. I mean, it’s the reality. It’s what plays out at my workplace every day. I don’t like it and I don’t agree with it. I don’t think that it benefits me personally. Even though the system works for me in that situation and monetarily, in the end it doesn’t benefit me, because it doesn’t benefit Baltimore City, and I live in that society.

NOOR: And do you feel like people are kind of trapped in that situation?

HICKMAN: Yes, ’cause I’m trapped in the situation now, even though I don’t work out there. But I try hard, very hard, to come out here every day to work, and it’s still not enough.

POLLARD: You know, in a society with rampant poverty, when a large section of that society is kept out of good-paying jobs, whether maliciously or not, the end result is the same, which is a shop where ten people make very good money and none of them are African-American. And that inequality anywhere would irk me, but especially in an airport named after Thurgood Marshall.

NOOR: UNITE HERE told The Real News that the union and supporters are demanding Democratic nominee for governor Anthony Brown end the state’s contract with AirMall.