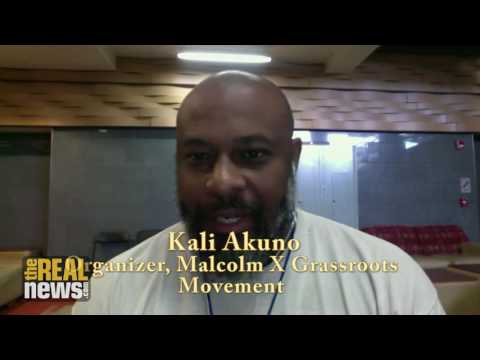 JAISAL NOOR, PRODUCER, TRNN: Protests against the police killing of Black men by US police continued for a third straight day on Monday, with hundreds arrested across the country over last week’s killing of Philando Castile in a St. Paul, Minnesota suburb, and Alton Sterling in Baton Rouge.

More arrests were made in Baton Rouge, Louisiana for a second night in a row after protesters against brutality pelted police officers with objects. Some 102 people had been arrested less than 24 hours before.

In Memphis, protesters shut down the Interstate 40 bridge for hours on Sunday night to protest last week’s killing.

SPEAKER: And it’s so beautiful to see my people and so many other people in different races coming together and making a stance, and saying you know what, we’re tired, tired of it. So let’s move, let’s do something. Let’s change. Today is the change. Now is the change. You are the change. We are all the change. We are history. We are the future. So what are you going to do about it?

NOOR: Arrests were also made in Minnesota after police clashed with protesters.

Police said those arrested ignored repeated orders to stay out of the street, while demonstrators said officers charged into the crowd seemingly without any provocation.

In Los Angeles, activists shutdown the 405 Freeway in a spontaneous protest after hundreds showed up for an organizing meeting. Activists say they refused to leave until the media covered their report the story. We’ll be interviewing Black Lives Matter Los Angeles organizers later this week.

Kali Akuno is an organizer with the Malcolm X Grassroots Movement.

KALI AKUNO: [inaud.] that folks didn’t retrieve. That’s a positive sign. And, you know, stay off the streets and kind of be in fear or, you know, not know what the police are going to do, and I think to this point San Francisco, Oakland, St. Louis, Atlanta, you know, Minneapolis, Buffalo here where I’m currently at, there’s been demonstrations and there’s been more determined show of force by the police than ever.

And that people have not backed down, have not been scared, I think is a positive sign, and I just think is more further indication that, overall, that the center, the liberal political center that we have known since I think World War II, is fracturing and it cannot hold. And what is going to come out on the other end I don’t think anybody knows, but I think it’s imperative for the left forces to get our act together more solidly so that we can play a role in determining what the outcome is.

RUDOLPH GIULIANI: I think that the reason that there’s a target on police officers’ backs is because of groups like Black Lives Matter that make it seem like all police are against Blacks. They’re not.

AKUNO: He’s doing his job, and we need to recognize that. He’s representing his interests. He’s representing the interests of the ruling class, you know, and the particular political segment and sector of the ruling class that he represented while he was the mayor and he’s tried to represent in his run for president. They are in crisis mode and in panic mode themselves, and I think that’s something we need to be mindful of, and I hope any young person who’s engaging in the moment right now on the street, it’s kind of a way of that.

They are going to try to put the genie back in the bottle, and it’s not going back in. The fear that they kind of [reigned] for so long, I think they’ve basically been shook. And they’re just going to try to restore law and order as they understand it and as they designed it. They’re going to just try to reassert that. So you see kind of maximum force, like you’re seeing in Baton Rouge.

The fear and intimidation for many, particularly working class Black people, latinos, you know, folks who have been forced to go in and out of prison now for several generations, that’s also not a fear.

NOOR: President Obama has called for calm and will make a national address in Dallas on Tuesday. Obama’s 21st Century policing task force, backed by some protesters like Deray McKesson, who was among those arrested over the weekend, focuses on training, oversight and building community relations, but stops short for calling for community control of police.

So, we’ve got to separate, my point is, to separate the rhetoric from the actual reality of what he’s implementing. And what he’s actually implementing in wholesale in our communities is the intensification of the actual structures of repression. That is, in fact, what he’s doing, so I would encourage nobody to take his rhetoric seriously in any respect.

And, you know, to the degree that there’s been some kind of conversation about oversight of any kind of the police, look at what basically kind of what’s happened in Ferguson over the course of the last two years where, you know ,the federal government basically kind of came in, in my opinion undercut a local community effort that was going on throughout the greater St. Louis metro region that was really trying to force some grassroots, you know, from the bottom up, reform of the system, and put some really kind of [inaud.] in place.

They kind of came in to supersede that, I think very strategically and intentionally, to just create a state to state relationship to where they would have a certain level of oversight. And then Ferguson basically told them they weren’t going to abide by it, and then they renegotiated the deal to extend the term, and so you basically got no fundamental change or reform, just, you know, we’re going to come in and monitor.

You look at what’s happening in Oakland, for instance. They’ve been under a state monitor for what, almost 12, 15 years going back to this latest one? And there’s been no fundamental change in the actual practices of the police. So, the actual struggle from the ground up to have some level of police oversight and police control, I think there’s been more consciousness within the movement that this is kind of a reform that might have some teeth to be able to monitor, fire, discipline police, but almost nowhere in the country have we seen it implemented, so there’s a lot more that needs to be done to really figure out, how do we gain the political power to actually force these things to happen?