In a defeat for the Sanders movement, the Democratic Platform Committee votes 106-74 to reject opposition to the Trans-Pacific Partnership

In a defeat for the Sanders movement, the Democratic Platform Committee votes 106-74 to reject opposition to the Trans-Pacific Partnership 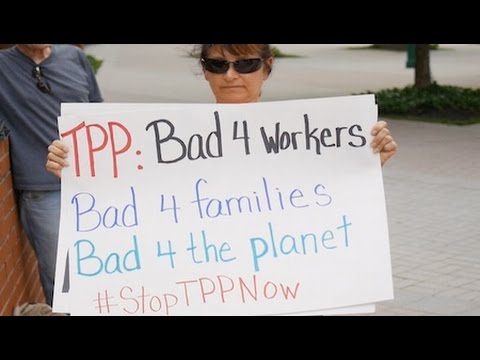 JAISAL NOOR, TRNN: On Saturday, the Democratic Party’s Platform Committee rejected an amendment to oppose the Trans-Pacific Partnership in its final draft which would [be] presented to the Party’s convention in Philadelphia later this month. The efforts to oppose the trade deal was led by supporters of Vermont Senator Bernie Sanders. Other measures backed by Sanders, including a $15 minimum wage, were adopted to the Party’s platform, which is non-binding.

NOOR: President Obama has been a key champion of the TPP, hailing it as a big improvement over past trade deals.

PRESIDENT BARACK OBAMA: Our future depends not on what past trade deals did wrong but on doing new trade deals right; and that’s what the TPP does. It includes the strongest labor standards in history. From requiring fair hours to prohibiting child labor, enforced labor. It includes the strongest environmental standards in history. All these things level the playing field for us. Because if they have to follow these rules then they can’t undercut us and sell their products cheaper because they’re violating these rules. Right now other countries can cut their costs by setting lower standards to pay lower wages. This trade agreement, TPP will change that. Holding partner countries to higher standards and raising wages across a region that makes up nearly 40% of the global economy.

NOOR: Recently activists like Margaret Flowers of PopularResistance.org have spoken out against the TPP and for the Sanders-backed effort to oppose it in the Democratic Party Platform.

NOOR: She along with a group of protestors gathered in front of DNC Platform Chair and Congressman Elijah Cummings office. He did not respond to requests for an interview.

MARGARET FLOWERS: The Trans-Pacific Partnership is the first agreement to be negotiated in secret where it was classified to members of Congress had very limited access to it. The public had no access while corporate representatives had full access to it. When we did finally because of our pressure, get to see the text after it was completed, it confirmed what we knew. That there are no labor or enforceable environmental protections in it and it enhances the power of corporations to sue our governments if we try to put in place laws that protect our communities or protect the planet. So it’s going to drive a global race to the bottom in wages and worker protections and prevent us from doing what we need to do to protect the climate.

NOOR: And why is there the Democratic Party Platform so important? Because its non-binding and Hillary Clinton’s already said she’s against the TPP now and she’ll be against it after she’s elected.

FLOWERS: So Hillary Clinton was for the TPP long before she was against it. She called it the gold standard and on multiple occasions was supportive of it. But when popular opinion made it unpopular to do that at the end of last year she came out saying, well I oppose it in it’s current form. Which is a very kind of vague opposition to it. So we don’t feel that that’s very firm and while we know that the Democratic Platform has no influence over what the Democratic Party does, we just think it’s very illustrative that even with an aspirational document, her representatives are not willing to oppose the Trans-Pacific Partnership. So we’re just trying to expose what this is all about. That this Democratic Party is on the wrong side of this issue and we’re concerned that if it’s forced to a vote, it’s a lame duck session, that they will cave under pressure and pass it.

NOOR: And some of the appeal that Donald Trump has for working class Americans is that he’s been unequivocally against trade deals. When we talk to Donald Trump supporters, that’s a big reason for many people even though they might find some of his racist xenophobic comments even troubling, they say ultimately oh he’s got my best economic interests at heart. Is that something that concerns you as well?

FLOWERS: Well I think it’s interesting that Trump is able to run to the left of Clinton on this issue because he understands and many of his supporters understand that these trade agreements, the past experience of them over 20 years now show that they ship our jobs overseas, they lower wages around the world for workers and undermine worker protections, they hurt our economy, they increase our trade deficit. So yea I think that the Democratic Party if they’re going to be a party of the people they need to get themselves together and start representing people’s interests.

NOOR: For the Real News, this is Jaisal Noor with Nadia Kanji.