The “Fight for $15” at Nation’s Top Hospital Remains Unfinished 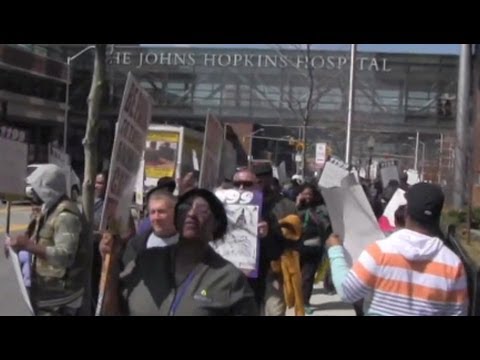 JAISAL NOOR, TRNN PRODUCER: I’m Jaisal Noor, here in front of Johns Hopkins Hospital in Baltimore. It’s the top hospital in the nation. But for the past several months, the lowest-paid workers here and hospital management have been locked in a contract negotiation.

A deal was reached at 2 a.m. last night. It still needs to be ratified by the workers represented by 1199SEIU.

But was this deal in the best interest of all the workers here?

CARRIETA HIERS, SEIU ORGANIZER AND NEGOTIATOR: They told us on the first day, $15? You’ll never see it. We see it. It’s there. They told us, no, that the contract took their breath away. Well, they’re still breathing.

NOOR: During the campaign, the union highlighted the fact that Hopkins pays, quote, poverty wages–defined as an hourly wage below $14.91 for a single parent–for many of its workers. Food service worker Michelle Horton is one of them.

MICHELLE HORTON, FOOD SERVICE WORKER: Eleven dollars and 35 cent an hour after nine years. It’s difficult being a single mother with three children. So my income is the only income, and I make do the best way I can with what I have.

NOOR: Like many other workers we’ve interviewed during the contract negotiations, Horton says she makes so little that in fact she cannot afford to include her children on her Hopkins insurance.

HORTON: My children, they receive medical assistance from the government. That provides their health care. For a family, which would be myself, including my three children, that’s $98 every three weeks. With what I make, that’s just–.

NOOR: They would take that out of your paycheck.

HORTON: They would take that out every three weeks. And with what I make, that’s just simply too much money coming out.

NOOR: Insurance premiums will increase during the length of the tentative contract. In 2015 and 2016, the increase will be 2 percent and can be no more than 5 percent annually during the remainder of the contract.

Johns Hopkins did not respond for a comment for this story, but previously told us in June they could not afford to pay what the workers were asking for.

The hospital had been offering less than the union said it was willing to accept. The union says in May the hospital’s offer stood at a 1.75 percent wage increase a year for five years.

This tentative contract, which is up for a vote Thursday and Friday, grants all workers a 2 percent annual raise with a 0.5 percent bonus in the first year and an additional 0.75 percent increase in 2017. It also establishes a $15 minimum wage for workers with more than 20 years of experience, and a $14.50/hour minimum in 2015 for workers with 15 years experience.

Additionally, the current starting wage of $10.71 an hour will be increased to $12.60 by the end of four and a half year contract. This does fall short of the original union demand of a base pay of $15 an hour.

This is SEIU organizer and negotiator Carrieta Hiers.

HIERS: The tentative deal wasn’t quite what we wanted, but it’s so close to what we wanted, ’cause we said 15 by 15 by 15–that was the campaign. So what we wound up with was anyone–for the first year of the contract, anyone with 20 years of service or more would automatically move to $15 an hour.

NOOR: Although the tentative contract does not achieve the union’s goals of lifting its workers out of the, quote, “poverty wages,” Hiers says they did win hard-fought concessions

NOOR: Bill Barry is a labor historian and the retired director of labor studies at the Community College of Baltimore County in Dundalk.

BILL BARRY, LABOR HISTORIAN: Well, I know the workers get a lot of credit, because this has been a long, tough, grueling negotiation, a kind of ground game. It’s not spectacular stuff, but month after month, they really kept up the pressure, particularly having that three-day strike.

NOOR: He says he reserves final judgment on the contract until details are revealed in the upcoming days.

BARRY: And hospital negotiations are very complicated, because normal activities to develop leverage–and leverage is what unions try to do to make the boss do what he doesn’t want to do–are different in the hospital industries and public sector, because the strike looks like you’re hurting patients and jeopardizing health care and things like that. So it’s different from striking General Motors or Bethlehem Steel. So the workers get a lot of credit. And I know it’s been a long, tough go for them.

NOOR: Barry acknowledges the union faced significant challenges in achieving all of their goals.

BARRY: One of the difficulties in t his negotiations is that there was a big gap in wage rates between the highest paid member of the union and the lowest paid member, and the highly skilled people were getting market rates in the $27 to $30 an hour range, and the housekeepers, who are much underappreciated in health care. And I think I would say that they’re as important as the surgeons, because if the hospital is not clean and sanitary, you’ll get sicker from being in a hospital [than you are out?]. And I think there’s race issues, there are sex issues, because it’s often black women who are doing these jobs, and I think they tend to be very much undervalued. And so I think that it’s a hard–it’s still not going to be the promised land for many of them.

And I think that they’re–I think you look at overall the health care system in this country run by the private insurance and Medicare, which is being starved politically, and people like the Hopkins workers at the low end pay the price for that. And it’s even worse, though, in the non-union hospitals, because at least here they have guaranteed raises built into the contract. It’s not based on the discretion of a supervisor or who likes you or who you play up to. And so I think that there’s going to be a ripple effect through unions and non-union workers in the hospitals and nursing homes in the Baltimore area.

NOOR: Worker advocates have also voiced concerns about the role outgoing Maryland governor and 2016 presidential hopeful Martin O’Malley played in the negotiations. On the verge of the Hopkins workers launching a second strike, O’Malley intervened, calling for a week-long “cooling off period.”

BARRY: As the governor, he wants to have Maryland promoted as a cheap-wage, low-cost state and attract industry on that basis. As a presidential candidate, he wants to say, well, I’m a friend of labor and I’ve always stood with the workers. And that’s a post that he’s going to have to straddle here for the rest of the year. But I think that health care is the largest industry now in the Baltimore area. And so the impact of this settlement is to be be determined is to be determined. But I can guarantee you this afternoon that if you called any hospital and asked to talk to the administrator or personnel director, they would not be available, because they’re sitting there looking at settlement and thinking, what are the implications for us? GBMC has got to start negotiating a contract, and with the union, same union, and so they’re looking at it. But the non-union hospitals are looking at it and thinking, uh, we have to maybe do something or our people are going to organize or they’re going to be unhappy or they’re going to switch jobs and go to work at Hopkins.

BARRY: What I have said in the past in interviews here on The Real News Network is that unions need to learn the meaning of the word solidarity. That is, the postal workers have a demonstration at Staples, you don’t see the hospital workers. The public housing workers are threatened with losing their jobs, you don’t see the postal workers out there. And I think that this is something which is a major challenge for union members. We need to help each other out. And you help each other out, and then you can get help in return. You will see as it goes along how this impacts their membership. And people will either be energized by the settlement and think, look, we were able to push Hopkins around a little bit, let’s get ourselves together and do it some more, or they will feel that, oh, Hopkins is the dark star, they’re too powerful, and let’s just go to work and forget it.

NOOR: At least one Hopkins worker we spoke to said she was both inspired and exhausted by the organizing effort.

HORTON: I didn’t know that so many people cared about people that they don’t know. Like, I have people coming up to me, like, oh, I’ve seen a picture of you and your children. I didn’t know that it was like that. Like, you got–like, I’ve even had some workers say, you guys are inspirations to us to be able to know that if we all stand up and stand together, anything is possible.

NOOR: The Real News will keep following this story.