After the long awaited release of the Chilcot report, many say British and US leaders should be held accountable for violating international law

After the long awaited release of the Chilcot report, many say British and US leaders should be held accountable for violating international law 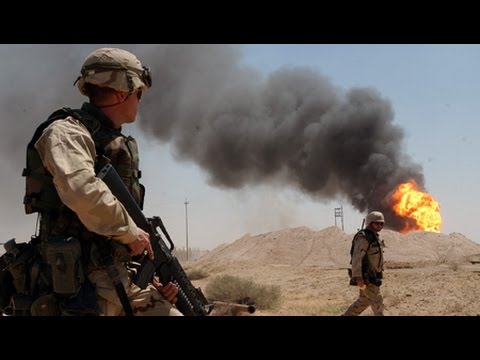 JAISAL NOOR, TRNN: A British inquiry into the Iraq war strongly criticized former Prime Minister Tony Blair and his government on Wednesday for joining the U.S.-led invasion without a satisfactory legal basis or proper planning.

The long-awaited inquiry report stopped short of saying military action was illegal, a stance that is certain to disappoint Blair’s many critics.

JOHN CHILCOT: The party has not expressed a view on whether military action was legal. That could, of course, only be resolved by a properly constituted and internationally recognized court. We have, however, concluded that the circumstances in which it was decided that there was a legal basis for UK military action were far from satisfactory.

NOOR: The report said there was no imminent threat from Saddam in March 2003, and the chaos in Iraq and the region which followed should also have been foreseen.

CHILCOT: Mr Blair presented Iraq’s past current and future capabilities as evidence of the severity of the potential threat from Iraq’s WMD. He said that at some point in the future that threat would become a reality. The judgments about Iraq’s capabilities in that statement and in the dossier published the same day were presented with a certainty that was not justified.

NOOR: The invasion and subsequent instability in Iraq had, by 2009, according to the most conservative estimates resulted in the deaths of at least 150,000 Iraqis, mostly civilians, and displaced more than a million.

CHILCOT: Blair told the inquiry that the difficulties encountered in Iraq after the invasion could not have been known in advance. We do not agree that hindsight is required.

NOOR: Outside, Stop the War Coalition campaigners read out the names of Iraqis and British soldiers who had died in the war.

In Iraq, many laid the blame for the rise of ISIS and Iraq’s instability on the British and U.S. invasion. The Islamic State controls a large area of the country. Just this past weekend, Iraq experienced one of its bloodiest attacks as hundreds of people were either killed or injured in a massive car bomb attack in Karrada, a busy commercial district of Baghdad.

SALEH MUTLAQ: [Translated] The decision to invade Iraq was a complete failure, and the evidence to its failure is the result that we’ve reached today. Today the world is threatened by terrorism because Iraq became weak. The weakness of Iraq has led to the weakness of other Arab countries, and the countries in the region were invaded by terrorism after it invaded Iraq.

NOOR: Back in Britain, British Labour Party leader Jeremy Corbyn, who spoke out against the invasion of Iraq, described it as an act of military aggression launched on a false pretext and a “catastrophe.”

JEREMY CORBYN: Frankly, it was an act of military aggression launched on a false pretext, as the inquiry accepts, and has long been regarded as illegal by the overwhelming weight of international legal opinion. By any measure, the invasion and occupation of Iraq has been, for many, a catastrophe.

Mr. Speaker, the decision to invade Iraq in 2003, on the basis of what the Chilcot report calls, and I quote, “flawed intelligence” about the weapons of mass destruction has had a far-reaching impact on us all. It’s led to a fundamental breakdown in trust in politics and in our institutions of government. The tragedy is that while the governing class got it so horrifically wrong, many people, many of our people, actually got it right.

There are huge lessons for every single one of us here today. We make decisions that have consequences that don’t just go on for the immediate years, they go on for decades and decades afterwards.

NOOR: Many, including Peter Kuznick, a professor of history and the director of the Nuclear Studies Institute at American University argue that people must be held accountable for violating international law.

NOOR: For all our coverage of the Iraq war and its aftermath, go to TheRealNews.com. This is Jaisal Noor.