Historian and author Gerald Horne says if we are not armed with history, we'll be unable to stop right-wing efforts to turn back the clock

Historian and author Gerald Horne says if we are not armed with history, we'll be unable to stop right-wing efforts to turn back the clock 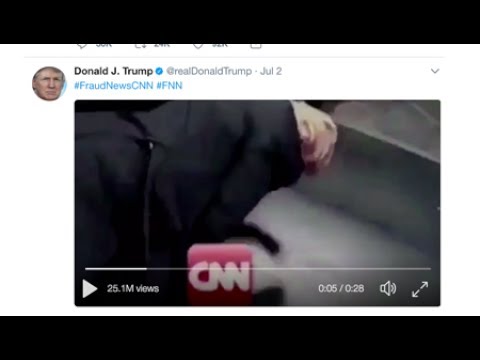 JAISAL NOOR: In the days leading up to the July 4th holiday, U.S. President Donald J. Trump renewed attacks on the media in a series of tweets. They also come on the heels of an alarming recruitment video from the National Rifle Association. We get a response from preeminent historian and author, Gerald Horne, who connects the Trump election with Britain’s vote to Brexit from the European Union.

JAISAL NOOR: Horne argues American’s weakened position internationally is at least partially responsible for what’s behind the growing conflicts between Trump and the media.

GERALD HORNE: It reflects this tension and conflict within the U.S. ruling elite, not least as a result of the fact that the United States is not able to throw its weight around in the global community like it once did, which obviously is going to shrink the super profits that U.S. imperialism has garnered from being the global policeman. And this is creating tension and conflict, and there’s no end in sight.

NRA video: The only way we stop this, the only way we save our country and our freedom, is to fight this violence of lies with a clenched fist of truth.

GERALD HORNE: Well, it’s a very dangerous video. It represents this unvarnished right wing sentiment that should be disturbing to us all. To be candid, it reflects a strain of neo-fascism that is quite chilling.

JAISAL NOOR: And questions the NRA’s silence over the police killing of Philando Castile, a registered gun owner who was telling police he had a firearm when he was shot and killed.

GERALD HORNE: I think that that reminds us that when gun control became a live issue in the 1960s, one of the reasons was that the Black Panther Party had come into the legislative chambers in Sacramento armed, which was legal. And this led to Republican and, indeed, NRA supported efforts to curb the wielding of arms.

But now, with the decline, if not the disappearance, of the Black Panther Party, the NRA is revealing its true agenda which is arming the white right so that if the U.S. government veers from a political line that they disagree with, they can lead an armed rebellion. And I’m not just making that up; that’s what they tell us openly.

JAISAL NOOR: The common thread that ties in these different things we’ve been talking about is this desire in conservative, mostly white America to go back to a time … to go back this previous time when we were dominant, when people stayed in line, people knew their role, minorities knew their role. There wasn’t this chaos that started coming about in the ’60s. Everything was good. We had a middle class. There were jobs. Like what Trump’s saying, “Make America Great Again.” How do you respond to this idea of going back to the things that … things the way they were in the past?

GERALD HORNE: I would like to say that turning back the clock is impossible. But as a historian who is quite familiar with the fact that, for example, in the late 18th century and the early 19th century, the French colonialists abolished slavery in Martinique in light of the ongoing turmoil that was gripping what is now Haiti. The fact of the matter is, is that after abolishing slavery, they then brought it back. So historically, it is possible to turn back the clock, particularly if folks who are going to be victimized do not have a firm and clear understanding of what’s going on. And I’m afraid to say that there is some of that.

For example, we’re marking the birthday of the United States, July 4th, 1776 when the Declaration of Independence was promulgated. Now myself and a few other historians have suggested that the birth of the United States was driven in no small measure as a reaction to Britain moving towards abolition of slavery, as reflected in Somerset’s case in June, 1772. And also as a reaction to the so-called Royal Proclamation of 1763, in which London expressed a distaste and a displeasure for continuing to attack Native Americans and taking their land so they could turn it over to the likes of land speculators like George Washington. And rather than see their fortunes imperiled, these colonists, these settlers rebelled and kicked out London and created the first apartheid state.

Now there is enormous evidence to support that proposition I’ve just articulated, but even in progressive circles you do not necessarily hear that kind of argument articulated, which means that folks today are ill-positioned to push back against these neo-fascist strains as embodied in the Trump coalition, and also as embodied in that NRA video that you’ve made reference to.